or: how to make a nice-looking twisted fringe. (IMHO, of course ;-)

To make a twisted fringe, you take two (or three, or...) bundles of cut warp ends, twist them separately until "done", knot them together and let them twist back on themselves.
As easy as that, surely?

Well.
The spinner in me recognizes that as a "shorthand" way of describing it.

There are a couple of things to consider. The first is: the warp yarn (that you are going to twist, to make the fringe) - what kind of yarn is that? Is it a singles, a plied or a cabled yarn?
Let us for a moment disregard the cabled variety. Thus, you have either a single or a plied yarn. What is the difference (apart from the number of plies)? Most probably, most single yarns you have has a z twist, while most plied yarns are spun z, plied s. (Note: most, but not all, mill-spun yarns are spun z.) 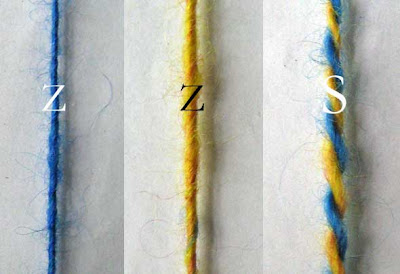 To make the most "nice"-looking fringe, one should take the bundle, twist it in the same direction as the last twisting operation, then proceed as above. This means that an ordinary 2-ply (spun z, plied s) should be twisted s, then let be gone back - thus making an z-twisted fringe.

What will happen if one does it the other way? Well - twistíng it z will make the plies separate; letting it go back will make a twisted fringe of sorts, but it will look a lot different...

Below is a picture of two very simple and slim fringes: two ends of a 3-ply (spun z, plied s) linen rug warp. To the left they were then twisted s (and let go), to the right twisted z, then let go. 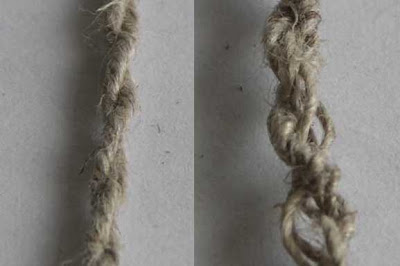 Weaving books often describe how one can twist two fringes "for the price of one" - doing it between blankets, shawls etc. This makes perfect sense if the whole run is sent to commercial finishing. (- in Sweden, commercial finishing mills used to want at least 12 meters of blankets, to even consider doing it.)
But.
What will happen if you do this is that the two fringes will be going in the opposite directions. For a blanket, that will be fulled and brushed, this might not be a problem - but it can be worth considering... If one wants the fringes to "look the same" on both ends of the piece, fringes should be twisted differently: if the start of one piece is done by twisting z, the end of the piece should be done by
twisting s.

Below is a picture of (the one) blanket I have done using this method. I deliberately followed the book, and twisted both ends in the same way. After fulling the differences are not very pronounced, but can still be seen.

For a cabled yarn (generally speaking: 2 z-singles plied z, 2 of these plied s) one has to try to see how the result differs. Usually, I end up by twisting in the last direction (in the example above twisting s).

For other observations on fringe twisting read here.
Posted by Kerstin på Spinnhuset at 08:38 1 comment: