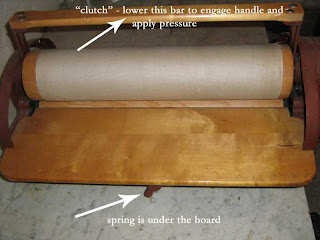 It is not exactly portable, as the stand and mechanism are cast iron. OTOH, it stays put :)

To change the pressure, there is a spring under the front "table" (that is easily lifted out): 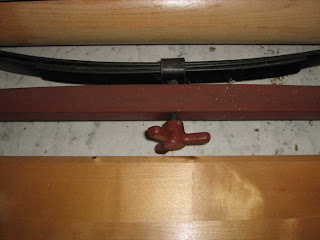 There is a protector sheet fastened to the top roller: 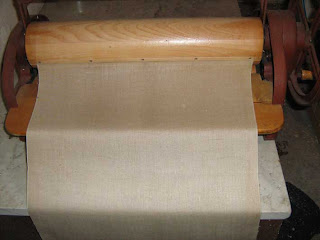 This sheet should preferrably be longer, but I haven't bothered to change it. Shopping for a  "mangle sheet" in Sweden will get you a piece of tightly woven (plain weave) unbleached linen.

To use it, put the (in this case) towel as near to where the protector sheet is fastened as possible, the hem as parallell to the roller as possible, and lower the "clutch" bar. The bar is both what engages the gears and also to protect your fingers. Start cranking, just to make sure the towel is in place, and held.
As you go on cranking, make sure the towel stays flat (always smooth it towards the sides). When it has gone a three-quarter turn, the hem is visible through the protector. 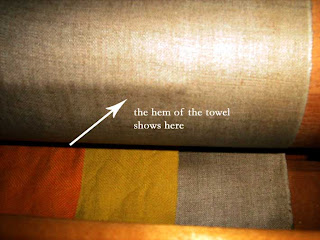 The "bump" of the hem will show on the towel - the only way to avoid that is to let the towel go straight through - like I did with this shawl: 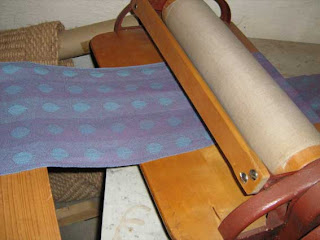 Once the towel has all gone onto the roller, you crank away "until done" - then disengage the clutch bar, and drag the mangled piece towards you. The top roller spins free when the bar is in the up position. 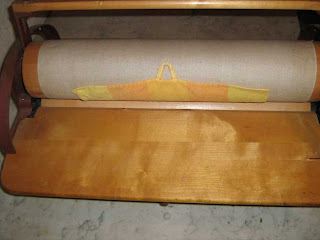 For best result, the goods should be slightly moist. If it is dry, sprinkle with water and let it sit for some hours in a plastic bag, to let the moisture even out. 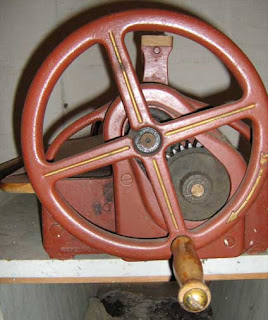 An experiment with skeins

I aquired some 3,5 kg of fine cotton yarn (probably 24/2) the other day. It is skeined, and some skeins have brownish stains. 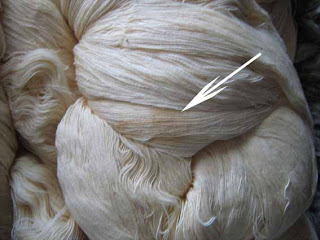 As there were many skeins, I decided to risk losing a couple - selected two stained ones, put in a number of extra figure-eight ties. Then I washed them in the washing-machine. One skein was in a bag, the other was "free".
To minimize the possible tangling, I selected the programme called "hand washing". Unfortunately, that programme will not heat the water above 30 degrees - to get higher temperature, one also get so much more vigorous washing. 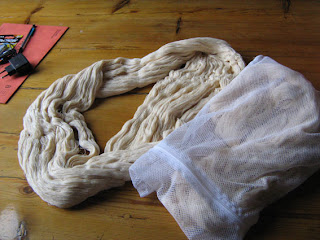 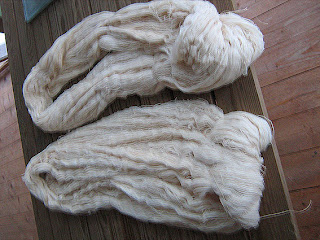 The last picture is not in focus, but shows the two skeins when still wet. As you can see, they did survive!

Unfortunately, I lost sight of the stains as soon as I stretched out the skeins, so I can't tell if they did get clean or not, but at least they smell nice! Now, the big question is: was this just beginner's luck - or dare I do the same to the rest of them? And... dare I hope it will work without the bag, net time, too?
Posted by Kerstin på Spinnhuset at 11:55 1 comment:

I first saw them on Weavolution, here and here, and was intrigued. I do know how to make V-shaped shawls - but they have two ends. These were closed!

I saw they were made on a Cricket loom, which is a rigid heddle loom ("loom", here, means it has both warp and cloth beams).

I saw how one could make one by using a rigid heddle with body tension (thus being able to apply warp tension without a cloth beam), but I could not think of a way to make them on a "beam" loom.
(I should say: I have no idea how Lydia Kendrick makes hers!)

Until the lightbulb went on: I have a sandpaper beam! As the whole meaning of the sandpaper beam is to maintain tension between warp beam and freshly woven cloth... eureka! (I hoped) 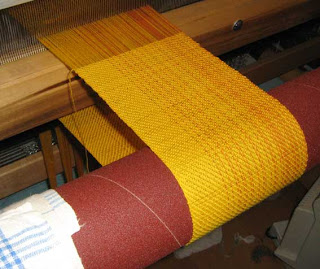 So I decided to try: measured my head (65 cm should be enough), put on a 15 cm wide warp, and started weaving. As the bobbin run out after 62 cm, that would have to be enough... and I started the V part. (This is when the Moebius shape is put in - the yellow side is "outside" on the loom, so it should be on the "inside" when the V is started) 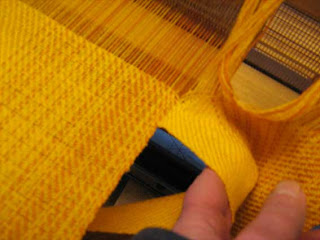 It looked like I had used a too light beat, and had it been more than 120 ends I might have scrapped it - . It is so much, er, "fiddlier" to find the corredt end and getting the weft tension right than one would think... 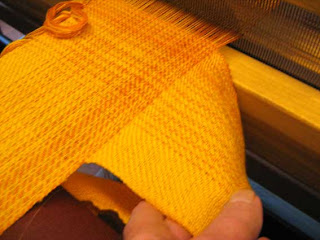 After cutting the warp, I wrestled the thing off the sandpaper beam (after taking it off, of course), and, here it is, fresh off the loom: 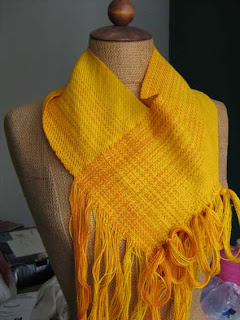 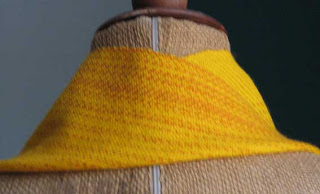 Honestly, it did not look promising... but after burling and mending (more than I care to tell you - when weaving on an AVL, always remember to step decisively on the left treadle!), fringe twisting, wet finishing and pressing it looked nice enough that I wore it to the guild meeting yesterday! 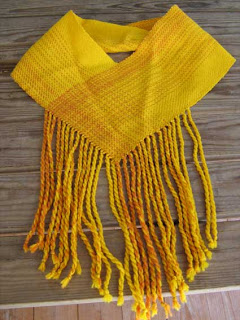 Now (the day after) I can say it was a fun and fast project - maybe I should make more?
Posted by Kerstin på Spinnhuset at 15:24 1 comment: