The naming of names

"I am a draper mad with love. I love you more than all
the flannelette and calico, candlewick, dimity, crash
and merino, tussore, cretonne, crepon, muslin,
poplin, ticking and twill in the whole Cloth Hall of
the world [...] "
(from Under Milkwood, Dylan Thomas 1954)

I can add some myself, off the top of my head: duroy, stuff, fustian, genoa, thickset, roundtop, gabardine ... and tweed.

All of them "weave names", all of them... confusing (at least to me, the foreigner).

Janet wrote, à propos my jackets , that they were both classical tweeds.

Of late, again I have had occasion to get confused about cloth naming. Remember the corduroy ?
There is that very Swedish (or at least "swedishified", I thought) word korderoj. I've known it (as a word - unfortunately not as a cloth quality) all my life. When I met corduroy as a cloth quality (or structure), and knew it for what we (Swedes) nowadays call Manchester velvet, I assumed that korderoj was the older Swedish word for, well, corduroy.

It turns out I was wrong.

All available (old and new) Swedish reference books claim that korderoj is not "what the English call corduroy", but instead is a "simple" (or maybe "cheap"), coarse (often striped) fabric for men's suiting.

To make things worse, "corduroy" is not derived from French - instead it is believed it comes from "cord" + "duroy". Duroy is a fabric name - meaning either "A lightweight WORSTED, akin to SERGE and TAMMY, and not the same as CORDUROY" or "duroy: coarse woollen" . (which, incidentally, ties it with Korderoj... perhaps).

Well, back to tweed. Janet, I'm glad you call them tweed jackets - it's what I called them myself. Until...

This is how Wikipedia defines it:
"Tweed is a rough, unfinished woollen fabric, of a soft, open, flexible texture resembling cheviot or homespun, but more closely woven. It is made in either plain or twill weave and may have a check or herringbone  pattern. Subdued, interesting colour effects (heather mixtures) are obtained by twisting together differently coloured woolen strands into a two- or three-ply yarn."

Also, there used to be a yarn called "tweed yarn", a singles, fairly coarse, with nubs in contrasting colours. The yarn itself was dark, grey, dark blue, dark green etc.

And, I think I remember having read some old English literature - Woodehouse, perhaps? - about tweed being "thornproof" and not showing mud spots.

All of the above means the jackets are not tweed. (But it almost sounds like the korderoj above?)
The Donegal tweed (from Magee  - bought in Donegal Town) I have supports that. Except it is woven of singles. There are about 7 ends/cm in the warp, and 5 or 5,5 picks per cm. It shows some signs of tracking. 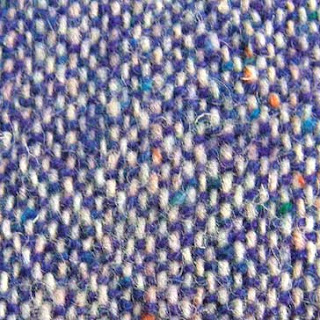 But... then, there is the Harris tweed (bought from a weaver, maybe in Harris, maybe in Lewis) 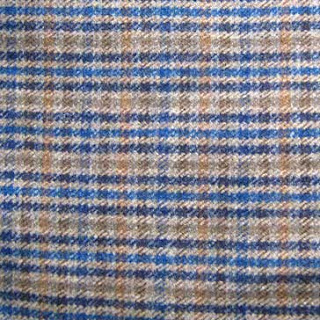 This looks a lot more like my older jacket - worsted, patterned... but woven with singles, with 12-13 ends and 19 picks per cm. The number of colours, and their sequence, is less complex than the Elgin, er, tweed. 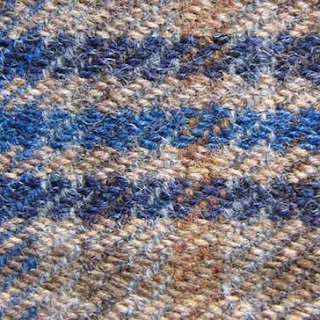 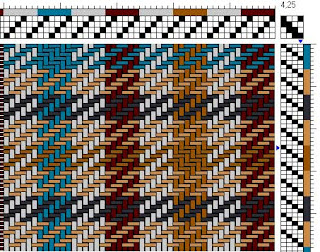 This jacket found me in a second-hand shop the other day: 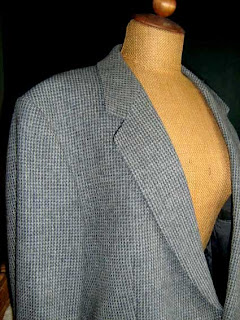 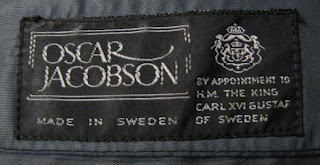 It is (well, was) a good-quality garment which has seen some ... hard work. There is a spot I will have to do something about, and the lining needs replacing. 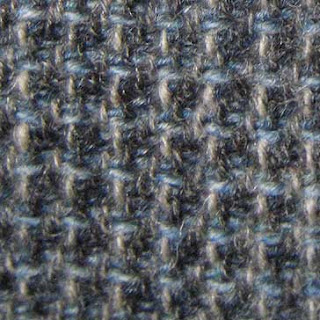 This is a fabric of a type I like: the nearer you get, the more details there are. This one has (probably) six different colours/shades. It is all wool, fairly soft woollen type singles sett at approximately 8 ends per cmentimeter. 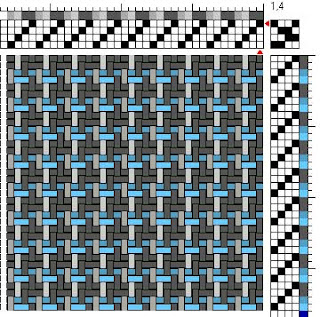 I have another old jacket - this one I have had (and used a lot!) for more than 15 years: 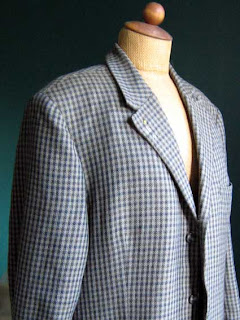 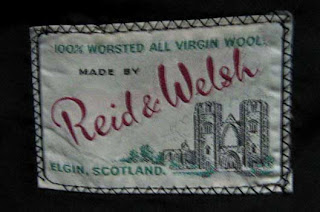 This fabric is very diferent from the other - worsted, to begin with. 2-ply yarns, 4 colours in the warp, four in the weft, about 14 ends/cm. This, too, reveals more details when you look closely: 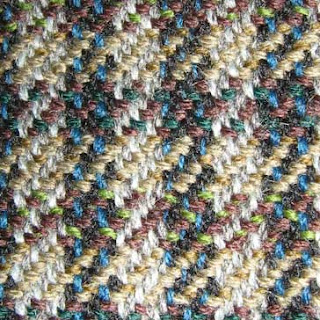 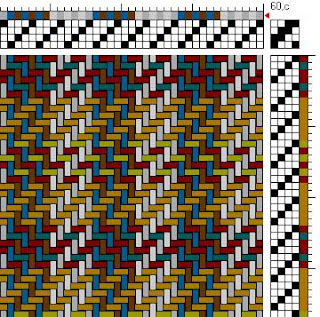 Aren't both these a proof of what I have always been saying: why use only one colour, when using a dozen or so gives so much more interesting results?!

And isn't it also interesting that the older one looks bluer than the new one, despite the yellow/ochre and green yarns? (No, it is not a camera problem - it really does look more blue.)  And isn't that proof that colour sampling (too) is A Good Thing?
Posted by Kerstin på Spinnhuset at 18:33 3 comments:

Portrait of a Lady

or, more accurately, of six ladies.

Since about a week, our household has four new members: 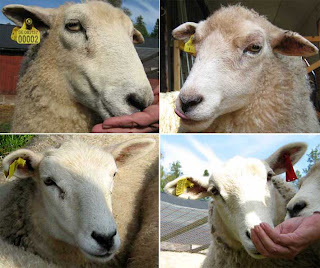 I also managed to get some better portraits of the two older ladies:

The two brown are, we were told, purebred Finn, while the white ladies are Finn x Texel in varying proportions. (Or, possibly Finn x Shropshire x Texel - obviously you have to be a spinner to take notice of sheep breeds...)
I have yet to see the x wool sans sheep, but they seem to have a slightly more defined lock formation.
I wrote about sampling the Finn wool here. Fortunately (or do I mean UN- ?) it will be another half-year until I have any white x wool to sample...
Posted by Kerstin på Spinnhuset at 18:29 1 comment:

The other day I was surfing handweaving.net , looking for texts/books about rugs.

I stumbled on The Shuttle-craft Bulletin of 1951, where I found the following:

Hmm. "Careless shags"?
A minute later, I realized what it was about... We call it "slarvtjäll" in Swedish. It is a compound word, slarv-tjäll, so... one could assume that looking up "slarv" and "tjäll" would give one some kind of translation.
OK, so "slarv" comes out as "carelessness"; "tjäll" does not exist in any of my dictionaries.
Knowing we are talking about rag rugs - ok, let's call it "shag".

Now, as I happen to be a native speaker, and having an interest in etymology, I know better. "Slarva" means "rag", "tjäll" is an old word (probably with the same root as "tent"); in the olden times it was used for (sturdy) lengths of fabric - wall hangings, if you will. What we arrive at is, in fact, "rag rug".
(OK, so in weaving circles we have given the name to the technique described in SCB: a rag weave embellished with inlaid pieces of rag, often with the ends protruding. OK, so it can be said that it looks "careless"...)

Sometimes I amuse myself with Google Translator. When applied to weaving texts (I should say "specialized texts") it can sometimes get funny, other times just incomprehensible.
A part of the article on double layers on my website:
Swedish -> English -> Swedish:


This is how I went to practice in the construction of the shawl:
Both stocks would be plain weave. To weave two layers of plain weave you need four shafts. Since the shawl has two parties join it for a total of eight shafts.
I choose the solvency of the orange wires on regular shafts (2 and 4 for one party, 6 and 8 for the second), and solvency is, the purple wires of the odd shaft. For easier access, the Solvency I choose to have the lot of most of the threads on the shaft closest to me. Where two layers overlap solver I alternately purple, orange bi.

The same passage in English (translated/written by myself)
-> Swedish -> English :


This is how I did it:
Both layers were to be plain weave. To weave two layers of plain weave we need four shafts. As the shawl has two blocks we need a total of eight shafts.
I choose to thread the orange ends on odd shafts (1 and 3 for one block, 5 and 7 for the other). The purple ends get threaded on the even-numbered shafts.
Where both warps/layers coincide I place the colours one-by-one.


This is how I did it:
Both stocks were plain weave. The two layers of tabby weave, we need four axles. As the shawl has two blocks, we need a total of eight axes.
I choose to thread the orange ending in odd axes (1 and 3 for a block, 5 and 7 for the other). The purple ends have tapped on the shoulders periodically.
If both warps / warehouse I place the same as the colors one by one.

I wonder if the original Babelfish (of Hitchhiker fame) was better?
(But I promise to tap you on the shoulder on the occasion your warehouse gets too full of purple wire...)
Posted by Kerstin på Spinnhuset at 12:40 1 comment:

Have you ever had a broken warp end?

Thanks to all the "foreweavers" (is that a word? - ok, all older weavers I have met) who have taught me so many tricks over the years: THANK YOU!

Here are two methods to mend a broken warp end: 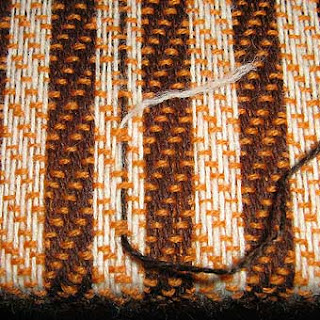 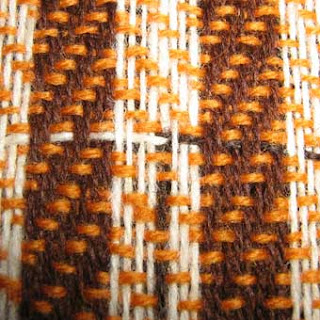 There is a more wordy explanation on my website - click here for the English version, here for the Swedish.
Posted by Kerstin på Spinnhuset at 20:08 1 comment:

I have always wondered if/how colour-and-weave designs would work with thick-and-thin yarns.

Now I had a good opportunity to test it. I had some cotton 8/2, and some 16/2 that was just a shade darker, so I threaded up a hound's tooth pattern: 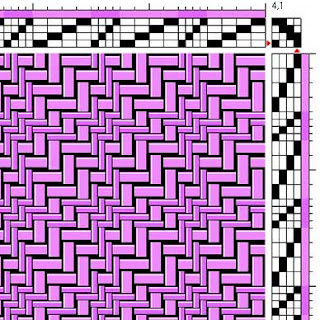 This is what I got: 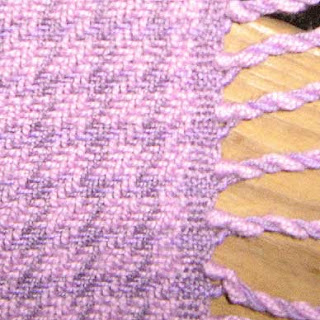 Ho hum.
How fortunate I did not have a thin yarn in the same colour...

So - obviously the difference in size was not enough, thought I.

For the next sample I used 4 ends of a white mercerized cotton for the thick and one end unmerc for the thin, threaded to log cabin. 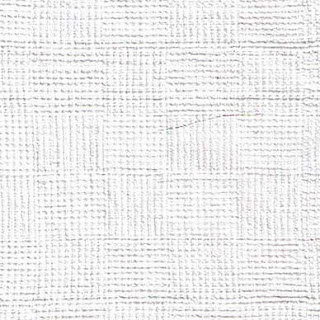 Okay, this time the pattern shows, but the quality is, er, sturdy. And not interesting enough to merit a re-sleying.
Re-threaded to hound's tooth: 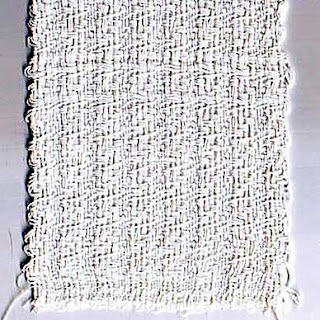 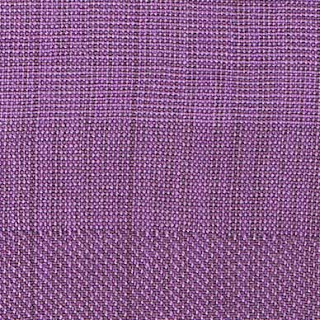 Now I have one not-very-interesting (but soft) scarf, and one idea less to bother with.
I think it is called "experience"?
(But we did get a "draft-of-the-month"  for September, at the guild site, so it served a purpose)
Posted by Kerstin på Spinnhuset at 09:39 No comments: