Soon to be flying!

Today I have got the first carpets for the guild exhibition.
(BTW - what is the difference between carpets and rugs?) Anyway, they have to be carpets - who has heard of "flying rugs"?

I haven't unpacked/unrolled them. I just ordered them in an arbitrary colour order: 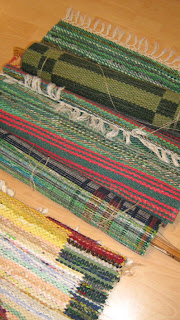 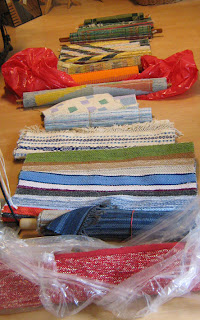 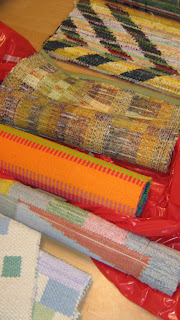 There will be some more (my own magic carpets, for instance ;-), but they will arrive next week. The hanging will be on Friday next. Watch this space!

And here is the only sun I have seen today: 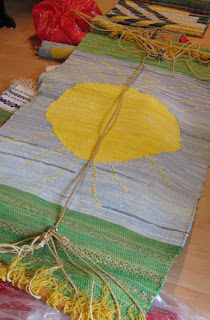 The French author Jules Verne (1828 -1905) was a true visionary. He not only visualized the submarine, the airplane and the space rocket. In his book De la terre à la lune (From the Earth to the Moon, or Från jorden till månen), there is a chapter called The Cannon Club.
(I've better point out that I have the book in Swedish only, so the translation, and the errors, are my own)

[...] When an American has got a fixed idea, he always looks for another American with whom he can share it. If they are three persons, they elect one as chairman and the other two as secretaries; the fourth member becomes press officer. When they are five members, they hold a board meeting. The Club is constituted.
[...]
A month after its inception, the Club had 1832 active and 3575 corresponding members.
[...] " 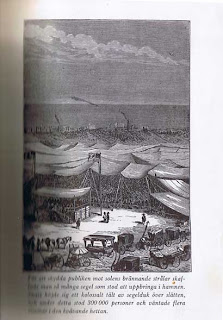 (illustration shows all members after a couple of months?)

(written by a Facebook refusnik, just so you know...)
Posted by Kerstin på Spinnhuset at 18:08 No comments:

The question was what to do with the "bad" wool - the tangled, the parts with lots of V(egetable)M(atter), the short bits... The answer: bird's nests, of course!

I tried various ways of making them in an efficient way. The best(?) turned out to be: wrap some dry wool around a small ball, well above the equator. Take one plastic shopping bag, previously twisted into a sort-of-spheric shape. Transfer the bag into the "nest", put the whole thing into an old panty-hose. Tie with a string.
I got 10 "nests" into one pair of pantyhose. Put it in the washing machine. Out of the 10 I got 8 passable: 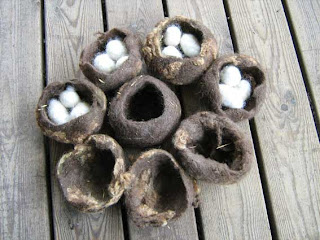 It can even be said that the VM adds to the appearance! (IMO, of course ;-)
Now, it I only could find out a faster way to make the eggs... 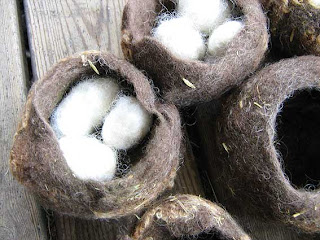 Then there was this show. A group of artists, representing many techniques (from glass blowing to textiles via painting and woodwork), were to have a show titled "Transparency".
At first I wasn't very interested, but then I had an idea: a drapery, with the basket weave for the joined areas, and the occasional word printed on something clear in the pockets.

Something clear... like plastic? Would laser printed plastic survive washing? Or hand written with a waterproof pen? It had to survive pressing, too. Sampling, I found that waterproof pens apparently are only waterproof if used in the wrong place (like if you get a spot on the shirt). I found that laser printers are different - pieces from one printer survived, pieces from the other did not.
In the small samples the basked weave acted like in the first sample, that is: it was nearly invisible.

So I wove, placing various words here and there.
Then I wet finished the piece. Some of the words were still visible, and the one-layer areas were a lot more visible than in the samples... 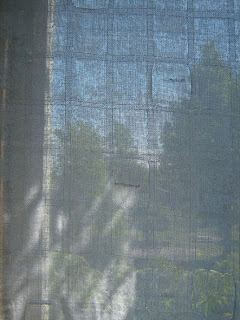 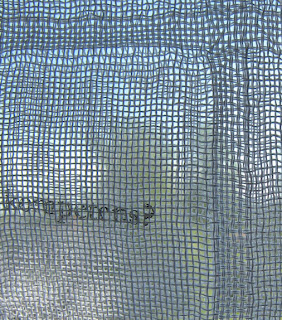 So... why didn't sampling help? The only reason I can think of is that the wear on the printed words was harder with a whole piece in the machine. (But I had washed the samples, not perhaps in a full machine, but with several towels, at the same settings, in the same machine!)
Why did the basket weave areas become more apparent? Is it just size - that everything looks different on a bigger scale?

The next weave of this type has half-transparent plastic in the pockets. The idea is a triple helix, with two plastic pieces in the same pocket where the "helixes" meet. But I abandoned the basket weave... 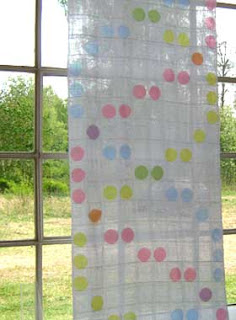 I made one "worded" set to order. Most of the words were still visible after wet finishing, but I had to replace some. As I had used a mercerized yarn, it was possible to tease the plastic out (and in) without permanently distorting the weave in the pockets. 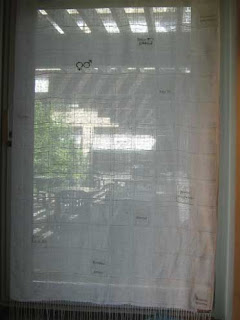 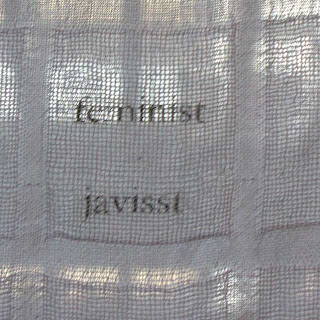 The coloured plastic is cut from cheap folders, the type that can take about 10 pages without overflowing. It will survive any kind of abuse - washing machine, any kind of iron, sunlight... and by doubling the colours it also becomes educational. (Several people do not want to believe me when I say that there are only 3 colours. They must not have been allowed to play with watercolours?) 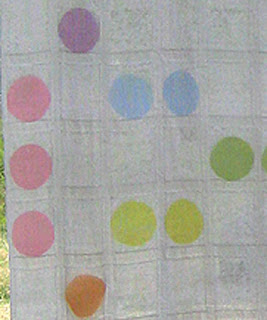