Wheels from the same family?


When first I moved down here (which is by now more than 18 years ago - how time flies!) I didn't want any more spinning wheels. I had two antiques, they are both good to spin on, and besides, I was weaving more than I was spinning.

Then we started to frequent the local auction house. I didn't actively bid on any spinning wheels, but they started to come my way all the same: "this one didn't sell, can't you take it?"
At some point, I started noticing all these wheels that obviously came from the same maker/workshop - they have a distinctive shape to the screw handle, the treadle is of a shape I've not seen on any other wheel, and they have a "waist" on the table, with a little punched ornament right at the narrowest part. I started to ask around - did anybody perhaps know where they came from? (They do not have a "normal" maker's mark - the ornament could be seen as a mark, I suppose, but I have seen at least 3 different.) No answers for the longest time - .
Some years later, it happens I now own two of them. The two are of very different sizes, with different ornaments, but obviously from the same workshop: 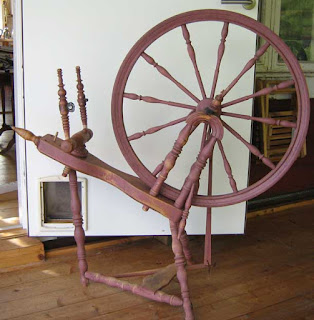 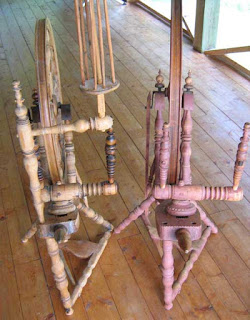 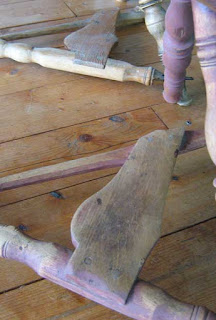 (I do have the flyers, and the bottom of the distaff for the pink one too) And even though they are quite different in sizes, they are unmistakeably from the same workshop - .

And then, quite by mistake, I found that the world-famous maker of wood floors, Kährs in Nybro, like to tell a little story: the founder started out as a maker of spinning wheels (branched out into furniture... "and the rest is history").
So I contacted them, wondering if it was perhaps their wheels I had (and was seeing all around). Disappointment: they do not have an "archived" one, they have no records of the number manufactured etc etc. But they did have a photo, often used in their marketing. (The photo is the top one in this post)
Disappointment again - nothing at all like my waisted ladies.
(The same museum that houses the abovementioned wheel, also has a black waisted wheel with the right screw shape, ornament, maidens...)

UNTIL: the other local museum in Nybro (yes, two historical societies, in a town with about 12 000 inhabitants) has opened an industrial exhibition: industry in Nybro from "then" (end of the 1700s) to now. And they have a waisted spinning wheel, ornaments, maidens... purportedly from Kährs. The museum guide, when asked, said their wheel is "the fancy model". Does he really know? - I don't know how to get further with this research, but the waisted wheels really are quite common hereabouts.

First an overview of the black lady: 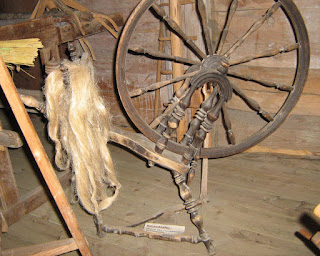 Some comparisons of details: 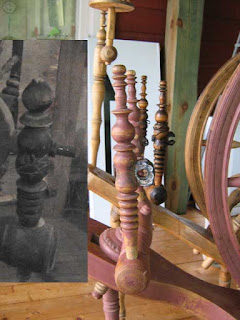 (the inset is of the black maidens, both broken at the tops) 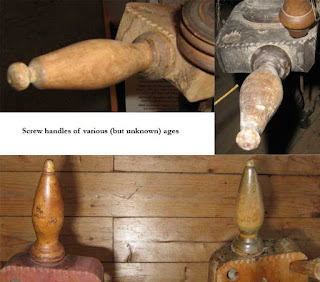 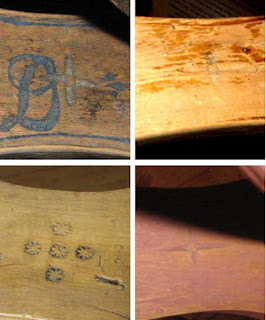 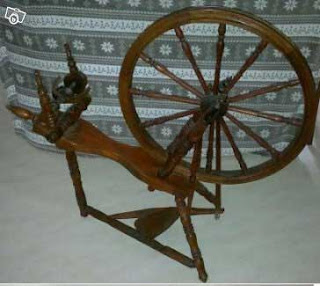 All of them have the same finials, the same treadle shape...
But where are they from? Are they, as the museum guide said, the "fancy" model from Kährs?

...and I have seen at least 4 more of this waisted model, but can't remember if they had single or double uprights. But I do remember that I have seen my "flower" ornament on other wheels.
Posted by Kerstin på Spinnhuset at 13:56 No comments:


Where has summer gone? And what have I been doing?

I have had too many hats, and only one head, that's what.

We are trying to organize a fibre-optic net locally (this is what living in the boondocks means - having to "fix" whatever we want ourselves... sometimes it is ok, sometimes less so);
we (a slightly different "we") are trying to organize a small museum for glass, not exactly technology, but showing old-ish machines, such as a manual press, a pantograph and... (read more here, only in Swedish);
I have been working on a couple of web sites - and I have had big problems with my web access (up/downloads of files bigger than a couple of k tended to die).

I have also washed my old kilim rug. To do this I had to invent a drying rack, as this (like all rugs) get very heavy when wet. My contraption may not work for wider rugs, but here it is, anyway:

take two ladders and some string, tie them together along the long edges (short strings on top, longer at the bottom), add one or more pieces of gutter upside down: 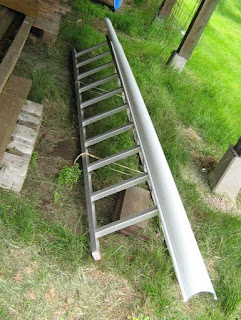 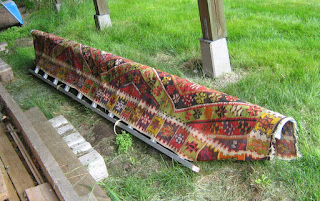 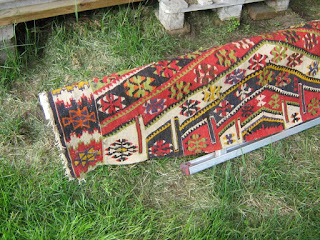 Next will be a stint of sewing, and, perhaps, more blogging.