Fanning for the future?


Before I had discussed fan-reed ideas with Pat, it had not even occurred to me to strive for straight edges. I mean - when you can do curvy, when in fact the whole idea is to make curves, why not do curvy edges as well? Oddly enough, Pat said the same, only opposite: fabric, whatever the use, should always have straight edges.

So I cooked up something radically different (from what I had tried previously): an advancing point threading with an advancing treadling - neither threading nor treadling "evening" with the reed:

To accomplish straight edges one has to sley from one "middle-of-the-fan" to another "middle-of-the-fan". With my reed that means the warp has to be offset a bit. As there are 26 dents/fan, and I sley double, I made the colour code on the draft above (click to biggify!):
from the right, from start to first red line, the 26 ends go in the half-fan; next fan gets 52 ends (to second red); from second red to first yellow, from first yellow to second; from second yellow to first green... I simply ended where I had the last half-fan filled.

The treadling repeat is 40 picks, I move the reed every 10 picks, and use 6 positions. This means the reed movements/treadle sequence do not coincide until after 8 complete reed movements.

Finally, I had found something that looks promising on the loom! In my experience, all fanned cloth looks streaky on loom - so did this: 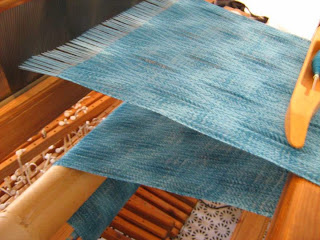 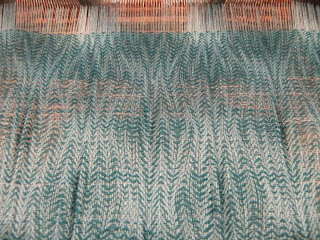 After fringeing, wet-finishing including pressing and mangling, it looks like this: 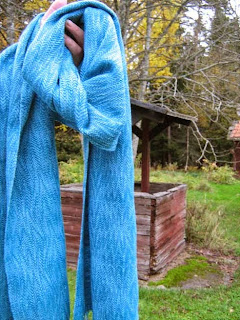 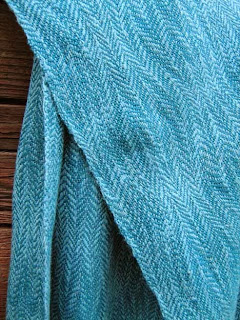 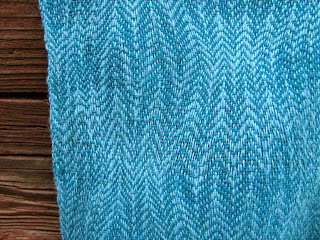 Most (but not all) weft streaking evened out with wet finishing, and the edges are tolerably straight.
But something funny happened when it was still damp: I was pressing, and dragged it along the ironing board. Look what happened: 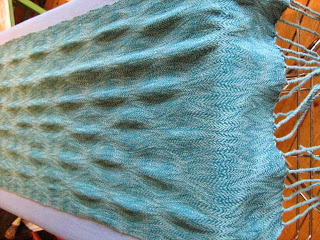 My first thought was that I had somehow "ruined" the straight edges, but it was just a passing phenomenon. When it was completely dry, it stopped doing that.

Someone suggested a fabric like this could be a nice yardage, for a jacket maybe.
I like the thought, but have no idea what yarn to choose.
The reed is a nominal 50/10cm, which means the most open part is somewhere 3-3,5 dents per cm, the closest end has about 12 dents per cm. For this piece I used cotton 16/2, and it is a bit too open in the open parts, I'm afraid it will easily snag.
But with a thicker yarn... how would that work in the close parts?

A yarn with more tooth, like linen, would perhaps work better structurally - but my first (ever) sample had linen warp. It got cut off after many, many mended ends and some 30 cm. Maybe it would work with linen weft only?

Or should I try wool? With a carefully monitored fulling?

It makes me sad

to learn that the National Guild is going to abandon the Weave of the month after five years. The reason is, I heard, lack of contributions.

This idea was mine to begin with. Or, to make the story somewhat longer: in 2004, my (then) guild decided to compile a calendar. The idea was not mine to begin with, but I ended up doing most of the layout work. The calendar was a success - we (almost) sold out at the Glimåkra days when we first presented it. (It can still be read online - follow the link above, then click on the pictures to see them bigger.)
After that success, we talked about doing it again, but somehow, it never happened. (Ours was a small guild, only about 30 members, of which some were not very active.)

A little later, I suggested that the National guild should add some "weaverly" content to the new website - like, perhaps, a monthly "weave" (could be a recipe, an idea, something inspiring weavers both new and old - and, perhaps, inspire more weavers to become members.) After lots of discussion the idea was turned down, with arguments from "nobody wants to share their secrets" to "but if it is 'open', why should ppl want to become members, as they get the benefit for free". (This last is a valid argument, it is always a thin line to walk: how much do we want to give away to "anybody" as compared to our members, who, after all, pay. Not always easy, to find a balance between "inspiration" and "free learning".)

Anyway, the idea took root, and 2010 the Weave of the Month started. As it was an idea from my guild, we took it rather too seriously - we (still only 30 members) contributed 4 weaves that first year. It was an immediate success, but the willingness to contribute was rather smaller than I had anticipated. With some persuasion and some more contributions from us, 2011 went by. For 2012, we agreed to publish several weaves from a handwritten notebook one of us owned - that saved 2012. (To see all contributions from us, look here.

Since then I have left he guild (for reasons mostly personal). And now I see that W-o-t-M is going to be abandoned. Apparently that first argument ("nobody wants to share their secrets") was so much more valid than I could ever had imagined. (The National Guild has some 1600 members total.)

It makes me sad that so many weavers do not want to share... sharing does not have to mean a complete "recipe", including colour numbers.

Wristwarmers, sewn from a piece of differentially shrunk fabric with fringes: 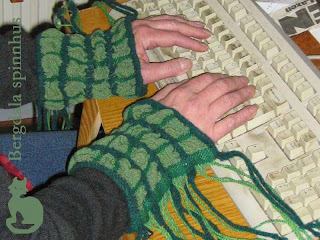 A dräll "flower". As I only have 16 shafts, it is constructed of five blocks of 1/2 twill. Note: the repeat ends at the red line(s). 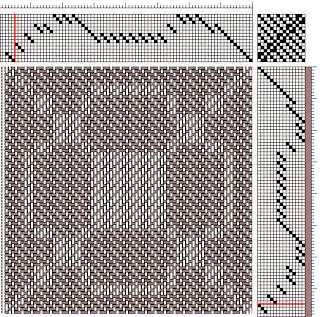 What it can be used for?
Well - by expanding the blocks, and using fat yarn, it could perhaps be made into a rug?
Or, with fine linen (and several repeats), it could make a tablecloth? Or a towel?
Or...

Posted by Kerstin på Spinnhuset at 14:16 No comments: