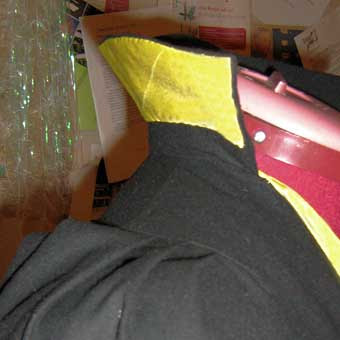 When I'm sewing several items of the same I like to do them a bit at a time: cut all pieces for best use of the fabric; sew (in this case) all the collars; sew all the "shells"; attach all collars and facings; hem them all (yes, my fingers hurt - I wish I could learn how to use a thimble!); line them all ...

This method is, on the whole, the most efficient. However, somewhere mid-point I tend to get depressed and/or panic: here I've been for a whole week, and nothing is achieved... So I decided to make one complete, with all adornments, closures - the lot.

One more week - then all of them will make their Grand Appearance on stage...
Posted by Kerstin på Spinnhuset at 19:45 1 comment:

My own hell - and a red eye 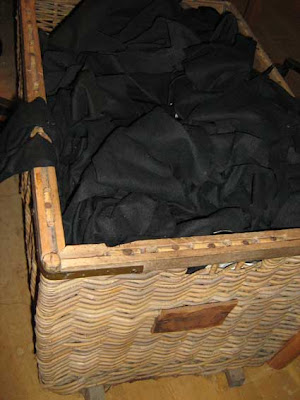 As I allowed myself lunch today, I dug out the Arnold text to see what she actually had written.
This is from Patterns of Fashion (ISBN 0-333-38284-6, page 3):
"[... ] the tailor is cutting out with a large pair of shears, the small scraps left over being thrown into the box under the table. By the late seventeenth century these scraps and larger pieces of cloth appropriated by the tailor as his perquisits were described as "cabbage". The term may have derived from the word "carbage". The Oxford English Dictionary shows that in 1648 Herrick used both "garbage" and "carbage" apparently for "shreds and patches used as padding". "Cabbage" in the sense of a tailor's perquisite is in use by the 1660s and thereafter is also used as a cant word for private theft. This definition is given in A Dictionary of the Vulgar Tounge printed in 1811: "Cabbage... Cloth, stuff or silk purloined by taylors from their employers which they deposit in a place called hell, or their eye; from the first, when taxed with their knavery, they equivocally swear that if they have taken any they may find it in hell; or alluding to the second, protest that what they have over and above is not more than they could put in their eye".

It turns out that I did use "cabbage" in the wrong sense, as I used the scraps to cut the collars.
However, reading on, I found that in the translation of Alcega's Libro de Geometria, pratica y traca, done in 1979 (published as Tailor's Pattern Book, ISBN 0-903585-31-6), the Spanish word "medios" is translated as "cabbage". The Alcega "medios" were exactly the "cabbages" that I used...

Above is my black hell (all silk, 3 different qualities), below is my red eye (acetate lining, as is the green behind).
Today I have started another black hell, also scraps of lining. 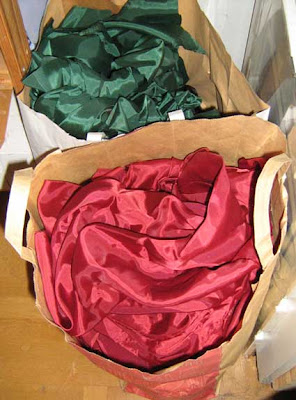 Posted by Kerstin på Spinnhuset at 19:19 No comments:

From the sewing room 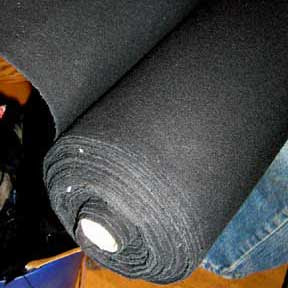 These days, I spend all my days in the sewing room. Black bourrette silk, 10 parts per item, organizing the cutting for best output - and keeping track of what has been cut, and what has not yet been cut. 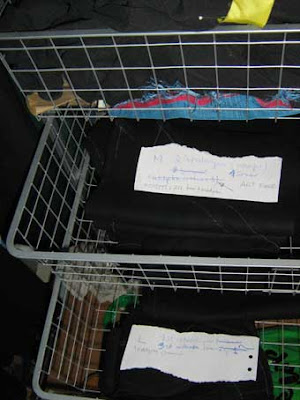 After two days of cutting, I had enough "cabbage" to start with the collars - the most fiddly part. ("Cabbage", according to Janet Arnold, was what tailors called the left-overs in olden days.) 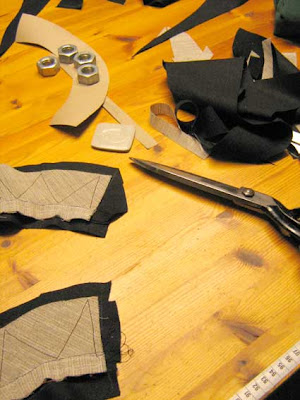 What I'm sewing? That will be revealed later... when the delivery is done. Here is a shoulder: 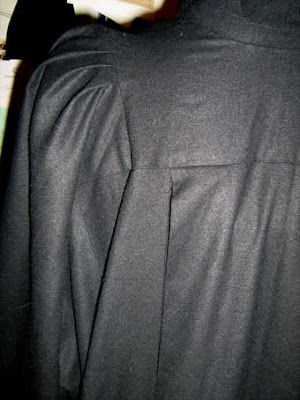 Posted by Kerstin på Spinnhuset at 17:40 No comments: 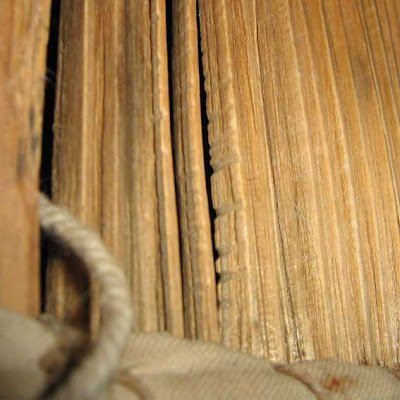 At both ends, the dents have distinct wear marks for about 5-7 centimeters. There are no marks on the dents in the middle.

I suppose it shows what can happen to your reed if you weave rugs without a temple...
Posted by Kerstin på Spinnhuset at 19:53 No comments:

As a nice holiday occupation I am examining the old reeds I have collected over many years.
One thing that immediately strikes me is that they are so short - most of them are between 5 and 6,5 cms (2 resp 2,6 inches). (Common height in Sweden today is 10 cm, or 4".)
The next thing is that they are so fine - the finest (yet - below) has 12,5 dents per cm (slightly over 31 dents/inch). The majority has between 8,5 and 10 dpcm. 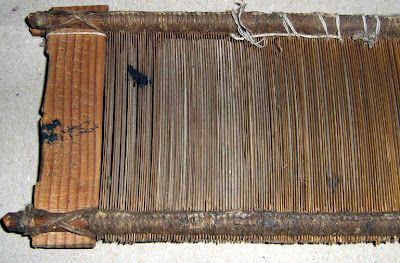 There are two different styles to them - either the separating strings are just wound one (or, in some cases, two) turns between the splines, or the string are knotted between turns. 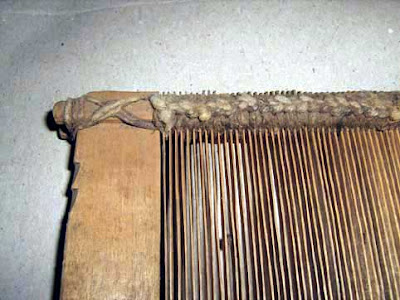 Some of them also has pieces of fabric sewn on. The fabric could be protection against wear - or perhaps it is padding? We all know that it can be very irritating to weave with a reed that doesn't fit snugly in the beater. The most good-looking one has both knots and decoratively carved end pieces: 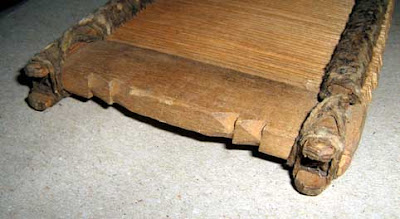