In this case, never travel without sewing necessities. 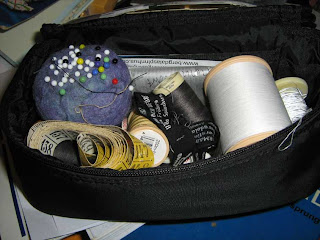 I’ve been to a conferece with mainly female lecturers.
From the very beginning, talk was heard of how hopelessly "male" the design of today’s wireless microphones is – the little (well, not-always-so-little) transmitter needs to be put in a pocket, or fastened to something, to be hand-held (thus occupying one hand of the speaker) or to be placed on a table (thus reducing the speaker’s reach).

So this morning I presented the moderator with two transmitter bags – one fairly upscale (silk and golden cord): 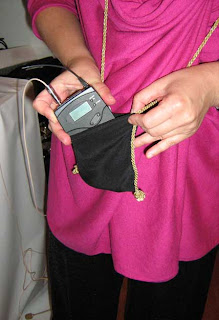 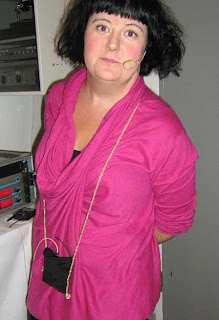 ... and the budget version (with silk pouch inside, to be visible): 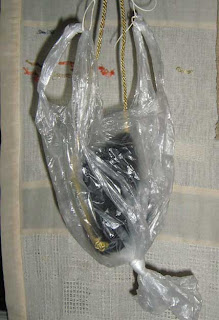 So now I have plans... watch this space!

This is the original profile 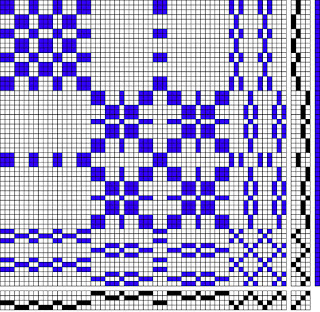 I wanted to make something narrower, for a shawl, runner…

This is the profile I used for weaving 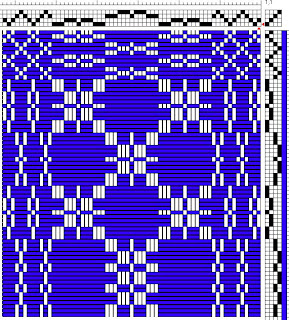 What I did, to get from the original to the profile I used:
First I mirrored the profile.
Since I wanted something narrow, I took out the middle, until only the outer motifs were left.
Hmm.
Something was needed in the middle. I put in an "opposite" motif.

This would be the ends of my long and narrow weave.

I selected a short sequence to be repeated for the long "middle piece".

As it is summer at the moment, I wanted to weave something light and airy - say a summer shawl in all linen.

I used my weaving software’s block substitution feature to create a threading - the threading named "Atwater-Bronson lace". (I use Fiberworks-PCW.)
Then I played with the tieup, and came up with two different ones that I would look both "same" and "different".
Details of the upper right-hand corner, tie-ups included: 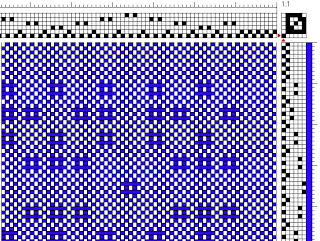 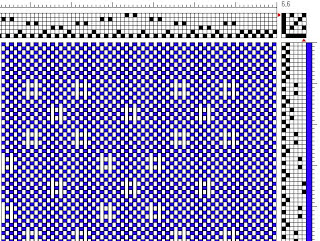 Overviews of the whole start end: 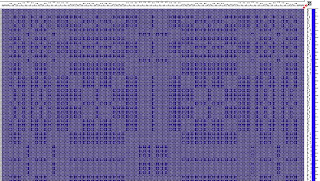 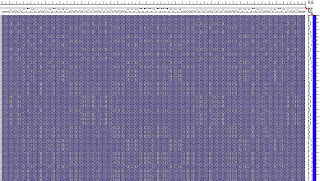 I wound a warp long enough for two shawls - linen 16/1 in four nuances of light blue, sett at 12 ends/cm. I wove it at about 9 – 9,5 picks/cm, the theory being that "drape" in a scarf is more important crosswise than leghtwise.

For the first shawl I used a light blue linen yarn (still 16/1) for weft; for the second I choose a slightly darker blue cotton 16/2. 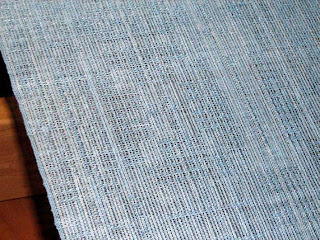 Both shawls after cutting off, fringes secured prior to twisting: 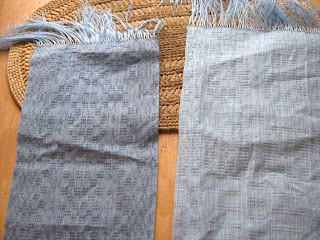 The fringe twisting was difficult - linen has a mind of it’s own! First, fringes had to be twisted "backwards" (they look so much better if one uses "uptwist" - since the singles are spun z direction, the fringes should be twisted z, too). After having twisted a gazillion fringes in the s direction, there was a lot of muscle memory to overcome to do it the other way - . Next, linen is a lot stiffer than cotton, and therefore it was difficult to "place" the fringe knots consistently. (I really should re-tie all of them, but that will have to wait some time…)

After wet finishing (machine wash, normal cycle at 60 C, very short spin) I let them dry a bit, then mangled. After mangling I "polished" them with a hot iron.

The one with cotton weft, hanging on the loom: 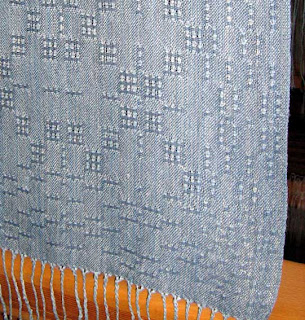 The other one was hopeless to photograph, but here is a detail: 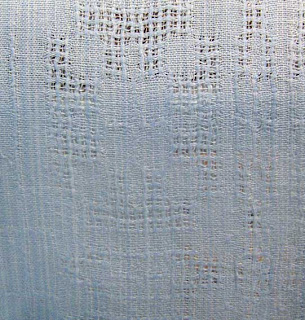 Linen, especially newly washed, mangled and pressed, is not famous for drape :-).
However, when it has been worn some, it becomes very soft and drapey (but then you can’t really see the pattern…)

Posted by Kerstin på Spinnhuset at 17:30 No comments:

I guess it started with the shirt. It reminded me of something, if I only could remember exactly what.

Then I saw this, and I knew: what Cyrus (Manual of Swedish handweaving) calls "crêpe on opposites" (in the English version it says "Small-patterned crêpe [...] drawn with the help of the four-part method [...]". (The Cyrus quotes in this post are taken from the English edition printed 1977)

"Crêpe on opposites" with colour-and-weave? Pinwheels, certainly – but other crêpes? 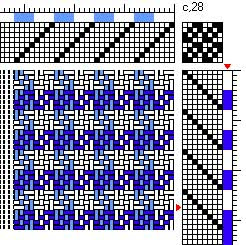 Hmmm.
The old CM in the shop was empty, so...
From the draft I could not understand/visualize how different placement of colours would affect the final result, so I threaded this, on 8 shafts: 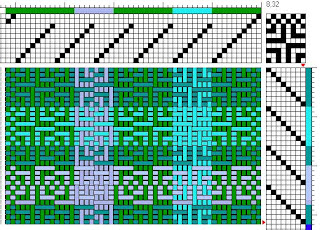 (Added a minimal selvage, as I could see it would be a disaster edge without anything, and I hate floating selvages). I also added two doubled colour stripes.

Weaving was not easy. Rather: beating was too easy. As you can see, treadles 1 and 8 form plain weave, but on the other treadles it is very easy to pack down the weft.
Anyway, I tried to concentrate. One heavier beat, seven light, one heavier, seven light... I managed so-so. (Note to self: next time, put it on the AVL – the auto-advance will help A LOT!)

Seeing it on loom did not make it easier: which colour placement would make the "best" pattern? 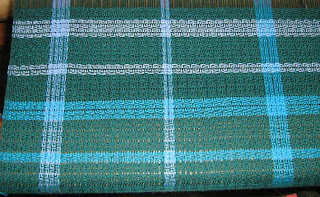 Having planned for two shawl-sized samples, I decided on two (slightly different) plans B.
The first: after about half, I went on to explore other possible colour arrangements. Here it is, just cut off: 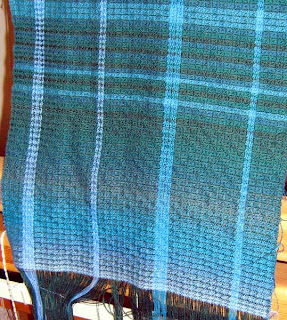 The next: make a laborious V. That was almost a mistake – but one (menaing "me") can never have too many shawls/scarves, right?
I divided the weaving in two, lenghtwise. When I got near the end, I cut off the (right) half, and wove it crosswise into the other. 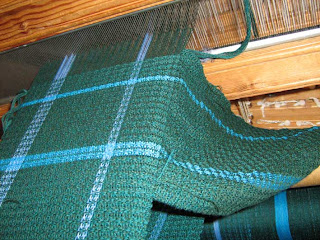 It was now it really showed: I had been beating too hard... 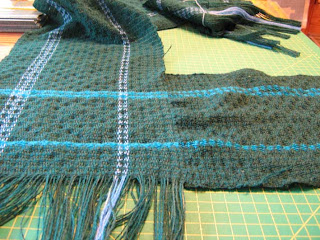 There are several things to say for my usual V method – one of them is that if the beat is off, it will occur everywhere simultaneously.
Another is that it is easy to find the correct end, as all the others still are in their heddles...
And no, wet finishing did not help: 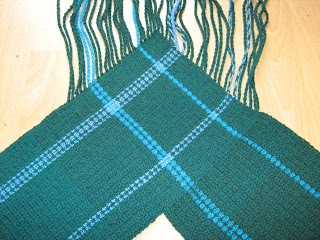 -When it came off the loom, the cloth developped an interesting structure (see above). As nothing is finished until it is wet finished, I proceeded with the wet finishing.
After wet finishing, I decided it needed at least some pressing – and it became all flat. Tried steaming, but it remained flat.
Some days later, when it has hanged freely in our very humid summer climate, it is still flat.
The only thing I have not tried is wetting it out completely, but maybe I should.

Back to the shirt structure: 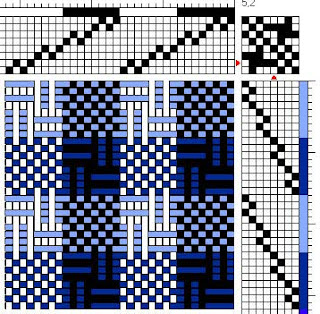 It does not follow Cyrus' rules ("[...] the repeat is divided into four parts, a pattern is drawn in the lower right section and then symmetrically opposite in the upper right section, further in the upper left section, and finally in the lower left section of the repeat"), but it can perhaps be called a "variation of a small-patterned crêpe on opposites"?

Oh, I forgot: to get the most interesting colour-and-weave result, the "other" colour should be placed on 1-8 (in my example) in both warp and weft: 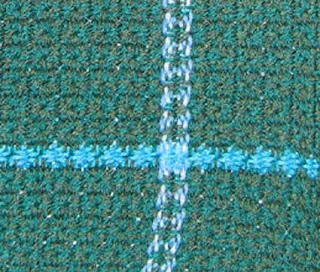 Posted by Kerstin på Spinnhuset at 12:41 No comments:

Seafaring and the importance of weaving

Nearly every time I say something like that, at least one person laughs and objects. Weaving – important for ships??? Oh, come off it, you weavers always want to show off.

Well.
The first "boats" were probably raft-like: timbers lashed together by... ropes, perhaps?
Some time later, so called "sails" were invented. And sails are... woven, right?

Sailing ships were around for a long time – according to Wikipedia from about 3200 BC, until the birth of the steam-driven ships (Wikipedia, again: [...]France, by 1774 [...]working steamboat with rotating paddles [...]sailed [...] 1776, apparently the first steamship to sail successfully.)
Several of the sailing ships had rather large sails.
It is believed that Santa Maria, Columbus’ flag ship, had a sail area of around 350 square metres – and the biggest ever sailing ship (Preussen, built in 1902) sported 4650 square metres of sails. (Even with a weaving width of 2 metres, that means a roll of 2325 m, or more that 2500 yds, of sailcloth.)

I think I have made my point: before there could be sailing ships, both spinning and weaving must have been invented...

On a trip to Karlskrona, I saw some examples of "fibre arts" pertaining to sea-faring: 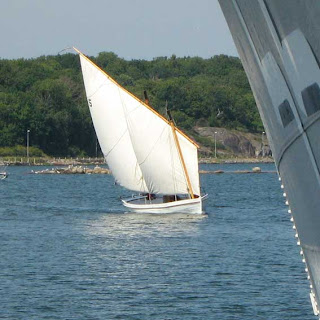 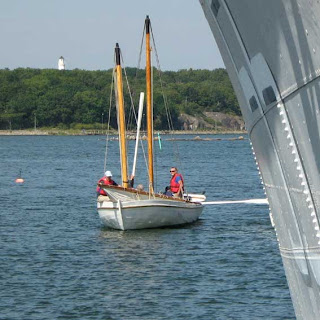 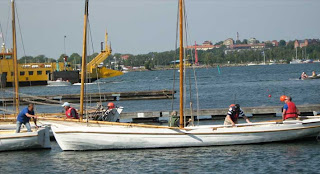 The sloops were built between 1830 and 1860, and are now used for (small, but still…) regattas every Thursday during summers. Read more here.

In the museum I saw some more "fibre arts" 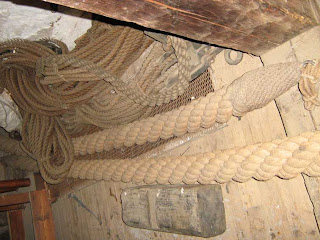 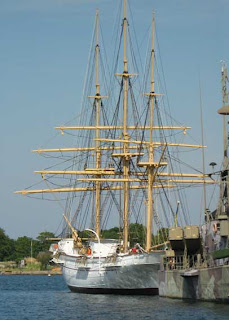 To complete this post: a rather big "water spout" 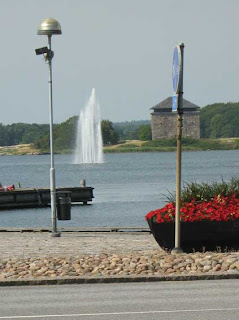