This year, I forgot about the April spools day until way too late.

However, on the last week-end of April, all glassworks hereabouts open their new summer exhibitions - for some reason they always (?) choose not to show pictures... Anyway, we went to Kosta, where I found this: 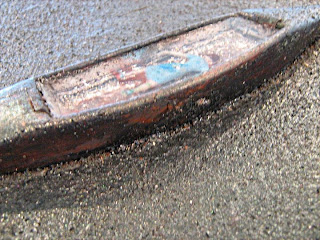 It was just a detail in a biggish (3 x 3 m?) installation by Bertil Vallien (and I neglected to take an overview picture).
In the second picture you can clearly see that it once was a genuine hand shuttle. (Click to biggify)

(Here are a couple more pictures from our "arty" trip on the Saturday.)

One way to construct a stitched double weave


Many years ago, I sampled for a stitched dw - it had a kind of point twill for the background, and a fairly open layer of (I don't remember... both pictures and draft got lost in a computer upgrade, and the physical samples are in A Good Place somewhere... There were a couple of cushion made, and then sold.)

So I tried to reconstruct it. I used 16 shafts on the AVL, so some of the tries I just did have too many treadles. This, therefore, is simpler: a 10 shaft point threading and treadling for the bottom, and a plain weave for the top.
I decided on a ratio of 3 (bottom) : 1 (top).

Here is how I started: 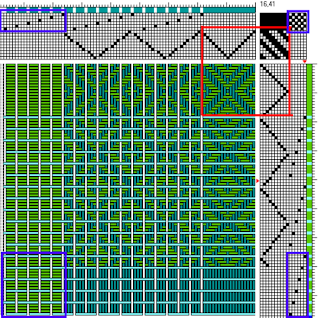 The red square is what the bottom layer looks like; the blue rectangles show the plain weave. These layers are now totally separate.

I started to add stitchers. Below is one way of doing that - I'm sure others can come up with "better" ways... 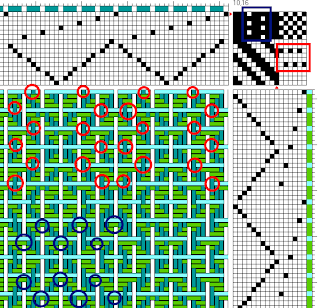 When looking at the back, it becomes obvious that I wasn't as consistent as I thought... (but I'm not going to weave it, anyway). The general idea is to place the stitchers so that they will "disturb" the top layer as little as possible - therefore they are placed near the places where the top end/pick is going under the top pick/end. Ideally, the bottom layer warp will slide over the stitching points, making the reverse side look undisturbed. To facilitate this, I would use a reed which is good for sleying 3/dent for the bottom layer, then sley 3 bottom + 1 top per dent. 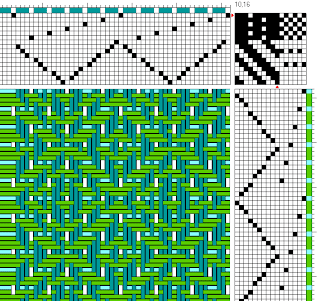 Posted by Kerstin på Spinnhuset at 11:00 No comments:


One of "my" universities is getting a new rector.

I was invited to submit a sketch for the new rector's gown - and it was expressly said it should have sleeves.
(And I am grateful for that - the original pattern is not one I am proud of, these many years later. How did it come to look like that? Read parts of the story here...)

Yesterday I delivered it. 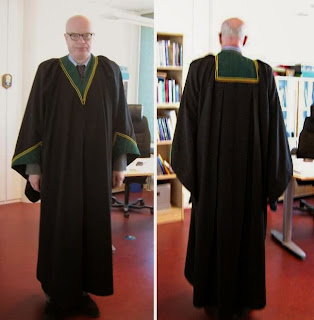 (unfortunately, the back view is blurry)

As you can see, it has elements of the original, and sleeves that are cousins to these.
Posted by Kerstin på Spinnhuset at 09:34 3 comments:

About dräll and other patterns

Starting with the word: dräll is a difficult word, probably coming from latin trilix, meaning three threads. (Note: in the etymology there is nothing at all that suggests "pattern".)

In Sweden, (the unqualified word) dräll has often been used as if meaning patterned (any kind of pattern). Sometimes, the word is qualified to "äkta dräll" (true dräll), when referring to a pattern where blocks of warp-faced structure contrasts with blocks of weft-faced (either turned twill or turned satin - thus multishaft).

As multishaft looms were not the most common, but the wish for patterning was, several methods for patterning on only 4 shafts were developed - as they were developed to mimic "true dräll" they often are referred to as "simplified drälls". Examples of simplified drälls are daldräll (overshot), jämtlandsdräll, sålldräll (Ms and Os, I think), kuvikas (S&W)... All of these have one principle in common: there is one warp system, but two weft systems, one of which gives plain weave.
There are many patterns named after a province (daldräll, jämtlandsdräll), a village (rovadräll, tynderödräll).
Other "meaningless" names are fattigmansdräll (poor (wo)man's dräll), soldatdräll (soldier's dräll). Another thing they all have in common is that the names do not really denote a specific technique...

There is also halv-dräll, which only has two blocks. There have been several "inventors" of that technique, one of whom was Wilhelmina Bergman. She published "Den lilla vävboken" about 1878, where she claims to be the "inventor" of a way to weave dräll on just 4 shafts (and she got a patent, valid for a number of years, 5, I think). This method is very much alike to what we call halvdräll today, with the difference that she did not use two different yarns for weft. (In fact, several old books do not) Over the years (the book was reprinted many, many times) she "invented" 4 ways to thread her... weave (she doesn't give it a name). Here is a screenshot of all four: 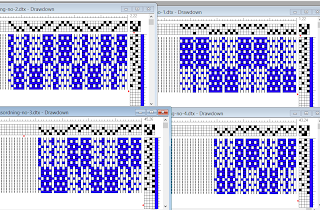 (The one in the lower left corner will not give a true plain weave, because the threading does not follow the "odd-even" rule)

At some point another "name" cropped up: five-shaft dräll (femskaftsdräll). These were obviously done on five shafts (with a special five-shaft pulley, pictured here - scroll down a bit), and were woven in some kind of lace weave. As I am notoriously hopeless with the "names" of lace weaves, I'll leave it there... (An example can be seen on my website, here - at the end of the article.)

There were also a couple of ways to add shafts, dräll pulleys or "two-tier pulleys" (lunor, in Swedish). I have written about both kinds here. These were (still are?) quite common, even though countermarche looms had begun to be used already in the 1840-ies.

EDITED TO ADD: there is now a special page on my website which deals with dräll pulleys: http://bergdalaspinnhus.com/artiklar/cb-looms2-e.html
Enjoy!