The fan fabric is done: inspected (several mistakes... some mis-sleying, some treadling mistakes, some must-have-been-a-bad-shed, one end not caught for long stretches), some repairs (only broken ends, the mistakes were too difficult); washed; mangled.
(I'm hoping I can get at least one shirt without glaring mistakes - perhaps it was A Good Thing I used such a busy/uneven pattern?)

So what have I learned? I think the most important thing is not to sley three per dent, because 1) it is very difficult to get it correct and 2) all too often the three ends did not separate when crowded.

I would have used a temple, had I but planned better: just five centimetres wider, and my biggest temple would have worked. Or: just 10 cms narrower, and one of the shorter temples would have been enough.

I also have learned to look better at the yarns when doing fairly dense setts - some of the spools had twisted-together ends, when they might have been knotted for better strength. I might have seen the knots, but the twists just separated. 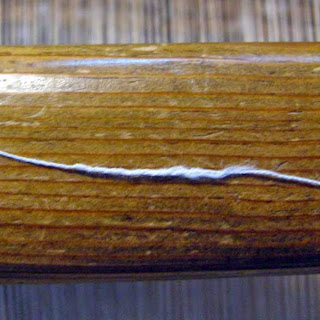 Perhaps also it would have been better with fewer shafts? The more shafts, the more difficult to optimize the sheds. Here I had 8 shafts, and after too much fiddling I decided the top of the sheds were "good enough"... wrong decision, obviously.

It was "interesting" to mangle a fan fabric. As you have seen, there are small bumps in the cloth when weaving. They are not all gone when washed, and even knowing the trick of only smoothing to the sides (never along the warp) when rolling, some bumps wanted to stay.

No matter how tight one tries to make the roll, after a couple of passes it has loosened - partly because of the back-and-forth motion of the mangle, partly because the cloth flattens. Because of the persistent bumps, I re-rolled several more times than I normally do. The result is ok, though.
(But I "cheated" and pressed after mangling, also to help with the after-drying...) 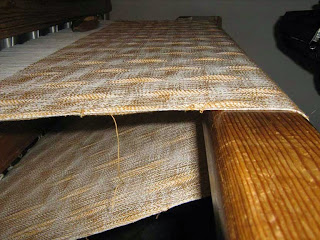 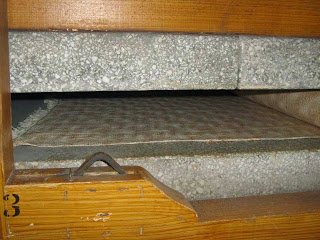 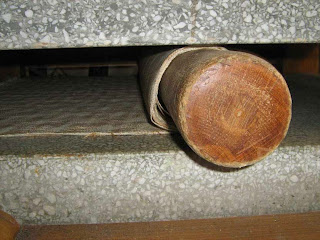 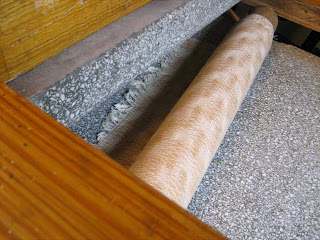 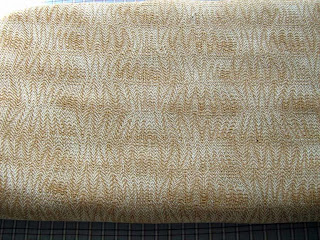 Now to decide what kind of shirt to make, to go with the sort-of-diagonal-ish pattern.
One of the obvious choices is a not-really-shaped top, but there are five metres of fabric...
Perhaps some kind of kimono (or do I mean bat-wing?) "over-shirt", perhaps? I'm not sure about set-in sleeves with a fabric like this - thinking that probably they have to be matched in some way.

The story of the little warp that grew


This happened many years ago (maybe in the late 80-ies?).
A weaving guild I was associated with decided to do a vadmal project. I don't remember how many participants, or how many warps. But I do remember there was a lot of research done, and many discussions with spinning mills (I think we had two or three "custom" mills in Sweden at that time). It was decided we should order our yarns from Solkustens spinneri (at that time they were located outside Oskarshamn). So we ordered "warp spun" singles in white, also some ombré yarn (grey -> white -> grey).

All warps were wound 20 metres long.

The cloth from the loom I wove on came off as 22 metres. Plus thrums, and the dimensional loss we all learn to estimate at some 10%.

No, it wasn't mis-warped; the yarn had stretched. (IIRC, most cloths came out slightly longer than the warp length.)

It all ended happily: we went to a hammer mill deep in the woods, we hammered for hours (and hours), came home and made coats and other clothing.
- the ombré users noted that the white and grey portions had shrunk differently and pressed for hours, in hope to flatten their fabric.
All of us noted that the selvages were longer than the rest of the fabric. Some of us found ways to utilize the flaring edges, others tried to press them flat.

(Many years later, I did it again, with some other friends, different yarns, different mill - read about the vadmal adventure here (in Swedish here).
The flaring edges from my first experience made me fold the fabric in a different way this time, which worked: the edges came out nearly the same length as the rest, but instead we got "in-and-out" waves.)

So what has this to do with anything?

But when I finally cut off this fan-reed fabric, it was a little shy of 6 metres (and I might have had maybe 50 cms more).

Considering I thought I had warped around 4 metres, the result made me remember the vadmal warp. In this case I guess I made two turns (and then some) on the warping mill instead of one turn (and then some). 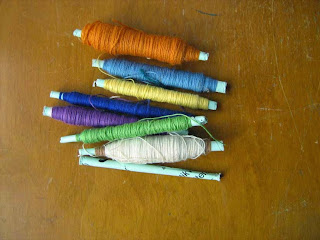 Some waiting to become cloth: 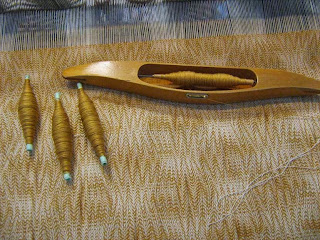 Making the next batch: 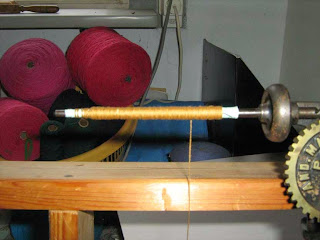 I like to make three at a time, making them when the fourth quill is begun, and a new treadling sequence is about to begin (with the reed adjusted and the warp advanced, of course).

... this warp is taking forever... but maybe it doesn't help that I do lots of "whatever takes me away from the loom"?
Posted by Kerstin på Spinnhuset at 13:19 2 comments: