This is a very old lampshade, it must be at least 30 years old. The construction of the shade itself is very easy: because of the pattern of this fabric, it was made as a cylinder with a channel for a drawstring at each end. The cylinder is slightly bigger than the wire construction, and sewed with attention to the pattern. 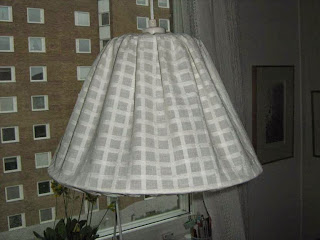 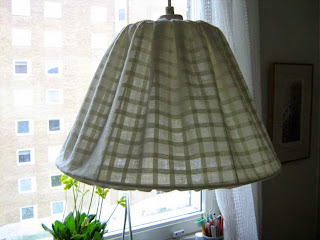 The fabric was bought.

The warp is a thin cotton. I think the warp yarn is the same all over, but it is hard to tell. The weft is the same, except for the closer bands: that yarn might be a thin singles linen. 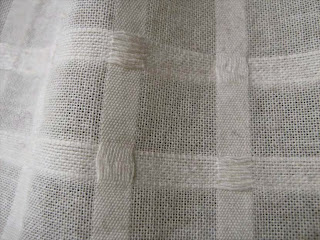 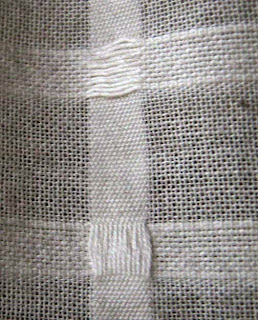 Here is the drawdown: 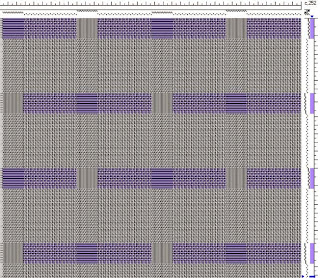 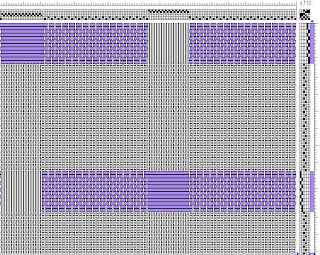 I gave the presumed linen a different colour, to make reading the construction easier. (The detail picture does obviously not contain a whole repeat - fill it in yourselves)
The crammed warp stripes has 24 ends each; for more open parts I did not even try to count the number...
Also, I did not check the sett, but my guess is that the crammed stripes has double the number of ends per unit (this is the reason I left every other "heddle" empty).

The same goes for the weft: the crammed bands have 12 picks, the two first end the two last in each band go in the same shed. I guess that the linen weft is double the thickness of the other yarn (and I think the other weft is the same as the warp).


(Hands that create) - the exhibition to commemorate the 100-year jubilee of the local Hemslöjden branch opened today.

The idea, when first announced, was to find 500 "creators" in the county, and let them choose one of two options: either a box 40 x 40 x 20 cm, or a "stick".
I first thought to use the box, but when I understood that everything in the box had to be glued down so that it (the box) could be handled any whichway and still look "good", I changed my mind - it had to be the stick. One could make anything suitable to hang from a stick, with max measurements of 80 x 160 cm.

This exhibition is what I made "The first daffodil" for.

The local paper (which I read hours before the opening) was disappointed that nobody had "dared" go "outside the box". (Somebody might have told it that the makers were warned anything "sticking out" would be rejected...)

Well. I arrived at the opening, there were talks, a performance (wood-turning on lathe and piano music), and then the doors were opened.

My disappointment was the "airiness": I had anticipated a "massive attack", box-upon-box-upon-box-upon-box, sticks, more-boxes... (A rumour said there were "only" 300 participants, all done - which might explain the, um, sparseness.) 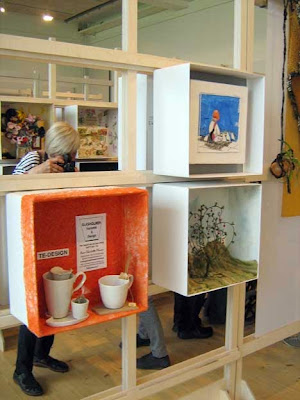 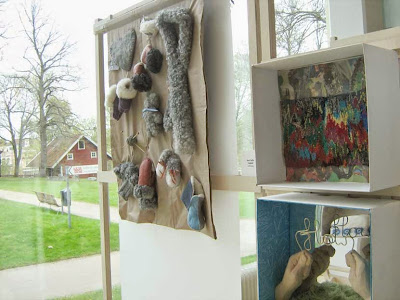 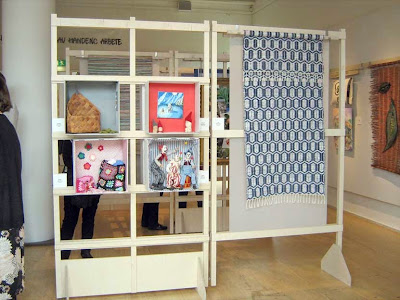 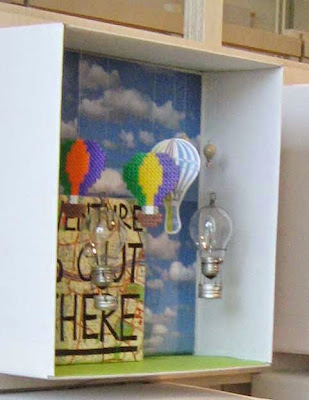 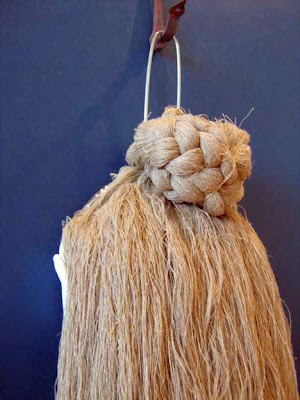 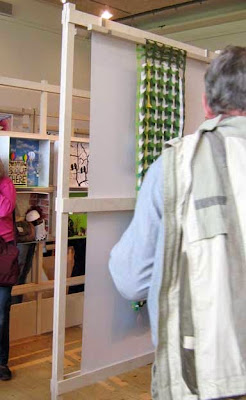 The public was there, though - not only the chosen 300; my guess would be double, at least. (This explains the odd photo-angles, but I hope it shows that all kinds of "making" was represented.)

I could probably have found a water spout nearer to the action, but after seeing so much people I got homesick. But on our afternoon walk we got our fill of running water - we "jumped the gate" and investigated the new walking trail that will be inaugurated tomorrow: 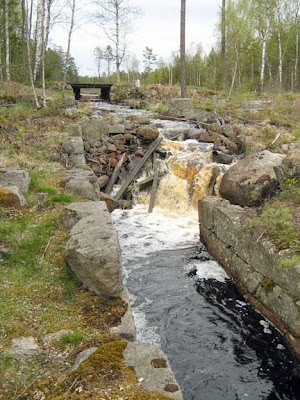 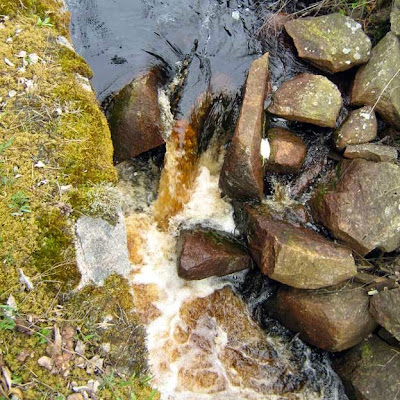 Posted by Kerstin på Spinnhuset at 19:44 No comments: 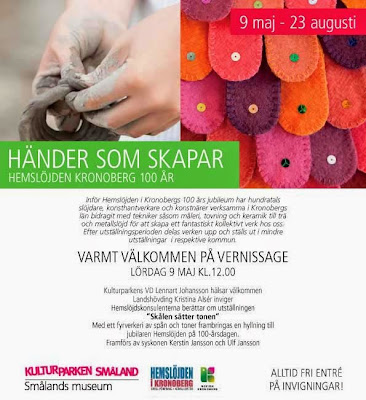 Read more here and here.
Posted by Kerstin på Spinnhuset at 09:38 No comments:

May the fourth be with you! 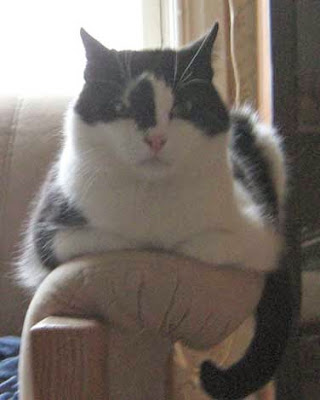 Posted by Kerstin på Spinnhuset at 18:03 No comments:


or: what excessive googling can lead to...

Someone asked me about "the Falkirk tartan", could I help explain?

I had to admit that "the Falkirk tartan" wasn't in my cache memory, so I would have to get back later.

There were a gazillion hits on "Falkirk tartan". Here is a picture, snagged from the National Museum of Scotland enlarged to double size (click to maximize): 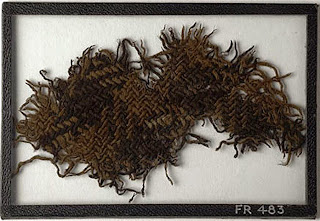 Some manipulating later, I decided this was as "improved" I could get it: 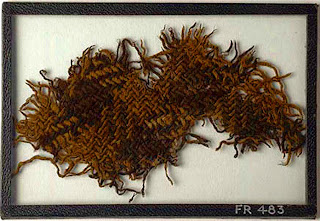 So, obviously, this is a straightforward 2/2 broken-reversed twill, treadled straight. (Well, who knows which direction is which, and it probably was neither "threaded" nor "treadled" as we understand the words nowadays, but the structure looks like this) 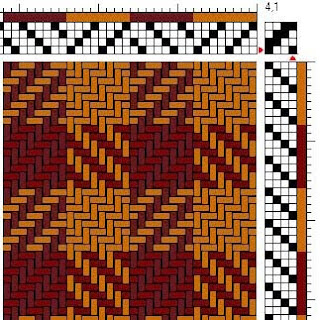 However, several hits used this same sentence to describe it:
" Although small, it is of a type known as weft-woven (or dog-tooth) check in woollen fabric. It has a simple check design of natural light and dark wool."

Er, yes. Of course it is a weft-woven check (I mean, all cloth is woven with a weft, yes?). But just how often do we come across the combination weft (hyphen) woven? By then, my google-fu had deserted me, I just could not convince it to search for "weft-woven" (as in weft-hyphen-woven). Tried some other search engines, with the same result.

So: is there anybody out there who can tell me what exactly "a type known as weft-woven (or dog-tooth) check" means???

Giving up on that one, I went on to "dog-tooth". Maybe I shouldn't have done that... as usual, "trade" has its own definitions, sometimes not agreeing with "handweaver" defs.

According to my usual (handweaving) sources, hound's tooth is a colour-and-weave pattern, a 2/2 straight twill with 4-and-4-ends/picks. If the twill is broken/reversed, it can become a shepherd's check (but by now I have run out of stamina, and I can't remember which of the other three quadrants is what I think of as shepherd's check, and, besides, does it really matter?) 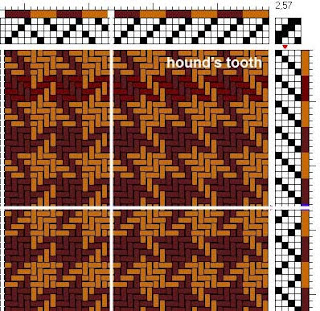