how to make it bigger...

I got a question: how to plan a patterned doublewide weave?

As usual, I answered "Make a paper weaving". 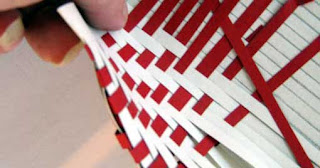 It has now resulted in an new article on my website: "To weave double width" (which also got a part 2, or it would have been way too long).
(Click here for Swedish version.)
Posted by Kerstin på Spinnhuset at 15:08 No comments:

We opened the co-op for the four days of Easter holiday.

What a difference, both with spring and the painting we have done! 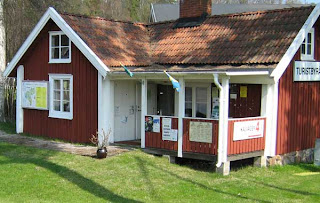 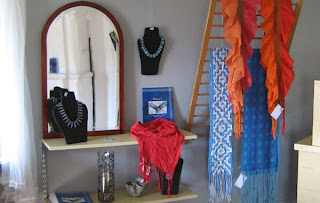 We will not be regularly open yet - it will probably be some week-ends, until the real tourist season begins.

Watch this space!
Posted by Kerstin på Spinnhuset at 15:03 2 comments:

I can't really blame the sheep for wanting to get out. It really is a lot greener on the outside (but all that is green is not grass, what should be "lawn" is mostly moss).
This is what I saw from the upstairs window a couple of hours ago: They (actually, just this individual) kept escaping last week, so on the Saturday we spent hours fixing a better (bigger) pasture. There's not much grass there, either, but it certainly looks greener. See the line between the winter paddock and the "pasture"? 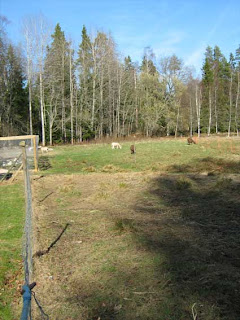 But... the ungrateful creature decided "lawn" was better, after two days on the greenish pasture. I could not understand how she had got out - the fence is well over a metre. But I was lucky: she wanted in again. Tried the gate first (maybe it would magically open?), gave up that and went to a special part of the fence, flattened herself completely and wriggled under. (I had never imagined a sheep could get that flat!)

... so I found some pieces of reinforcement bars (is what the dicitonary calls it?) and made some oversized staples. They "only" go 20 cm into the earth, but maybe they will hold a couple of days, at least. 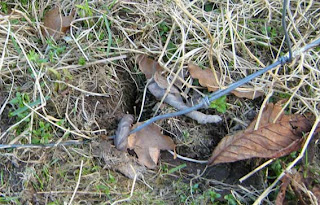 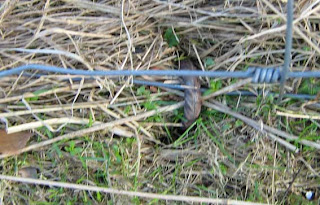 Life is never dull with livestock (or perhaps I should call them "woolstock"?)!
Posted by Kerstin på Spinnhuset at 17:42 2 comments: 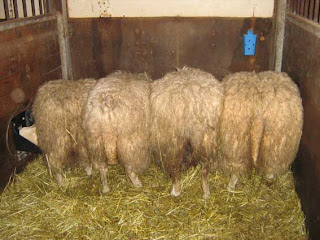 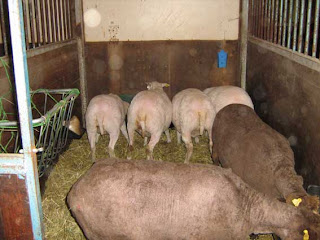 (those pink things can't really be sheep, can they?)

The shearer had a special table, to have a better position when working. 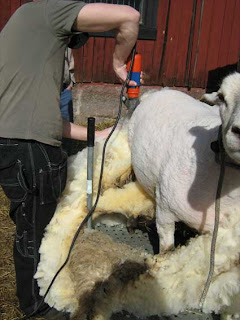 One-by-one there emerged some small, pinkish animals - pigs, perhaps? When the first was "done" and released, the others almost did not recognize their comrade, and there was a lot of running and head-butting. 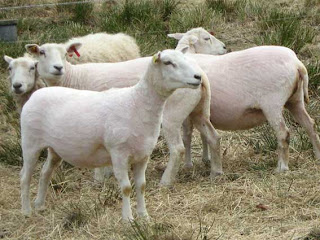 Obviously they liked to be naked. The immediately tried to escape (and succeded).
Stupidly, we had left the plastic easy-to-move fence over winter, and it did not survive the heavy snow. We did make a smallish paddock with electrified wire, which worked fine as long as they were all woolly. Naked, they could crawl under... the bottom wire was a bit high, now the snow has melted.
When we had fixed the "winter" fence, they accepted to stay inside. Until... one managed to climb the stone wall (something they never even contemplated when woolly). She told the others, of course, and it took me a couple of hours to put up another piece of temporary fence.

The whites all are crossbred - we were told they were mostly Finn, but crossed with Texel (and possibly Shropshire). To keep track of what the wool looked like, and which fleece belonged to which sheep, I took a lock from each, fingerspun a short piece and labeled the sample. It appeares that out of four sheep, I have three different wool types. 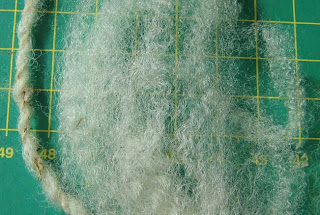 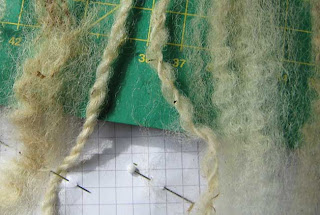 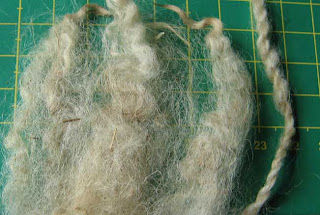 (The two brown are Finn, and their fleeces are quite alike. And looks like typical Finn wool :-) 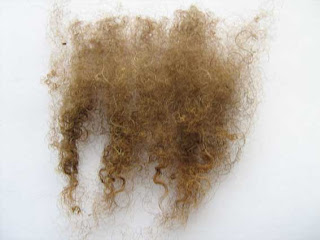 But, before I can do anything more, I have lots of wool to wash...
Posted by Kerstin på Spinnhuset at 14:11 1 comment: