Putting on the tension

The double flyer wheel is now dusted, and the wheel that drives the flyers can be taken out. So far I haven't been able to get off the bent nail that holds the other wheel in place. Of course that nail sits on the treadle-side of the axle... It looks like I may have to saw it off.

The dead leather bearings for the left flyer are out (and some of the paint with them, but that couldn't be helped). I think I probably will have to change the other (painted) bearings, too.

The left flyer is now tied in place with cords, to make trying out different placements of the (probable) tensioner possible.

There are two possible ways that I can think of. 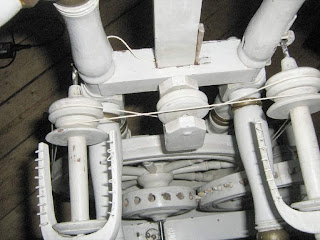 Or it wasn't correctly mountetd. If the tensioner is mounted the other way. It can then depress the drive band to create tension - but both turns of the band have to go under the pulley, which doesn't look right, either: 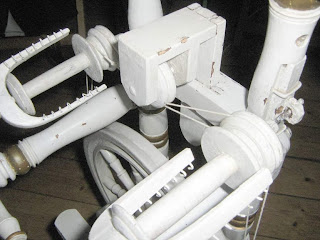 I have also found that the right-hand distaff is not original. The right-hand finial (the non-threaded one) is "clumsier" than the other (see pics in the first post), the distaff arm is slightly thicker and the distaff istself has too many knife marks (it has been carved after the turning).
I have, of course, tried to find pictures of DFWs.
On those which have included distaffs, all of them have had only one. Why is that? To me, it made good sense to have two: even on the most perfectly dressed distaff it could happen that the spinner got hold of "both ends" of a fibre?

The last about double pulleys

First of all: I now own one double pulley! It was there, just beside the double flyer spinning wheel - it rather seemed like a "double" day. Until I asked for the other pulley... the dealer didn't even understand the question: why should he have a pair?
Anyway, it followed me home (even though the pulleys won't turn): 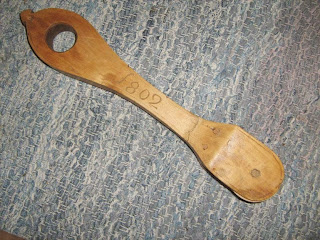 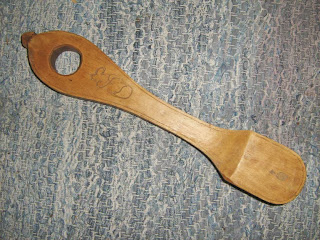 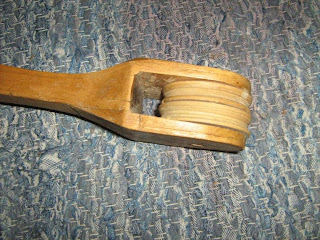 In the last post about double pulleys I wondered about Grenander's sentence "[...]with two pulleys on two axles on the same level [...]"
Jean graciously sent me a picture of this kind of double pulley(s): 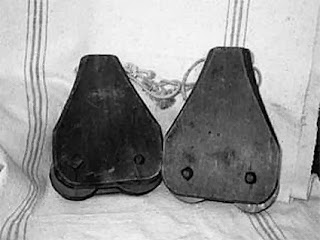 Thanks, Jean - I had never seen such pulleys before, but apparently they existed even here.

Anyway, when I unearthed my folding CB to ready it for a demo, I decided to try to rig a "double pulley" simulation, to see if it would work with the crossed cord tie-up.
I thought I would just tie four cords over the castle, like this: 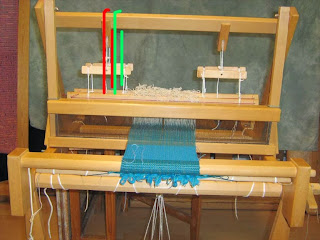 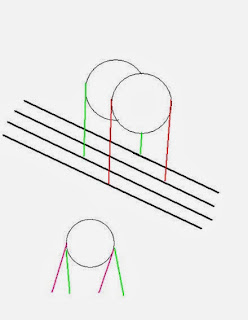 Half an hour later I decided I wasn't very interested, after all. (IOW, I couldn't get it to balance/work...) The horses went back on, and the demo went considerably better that it would have with the crossed cords...