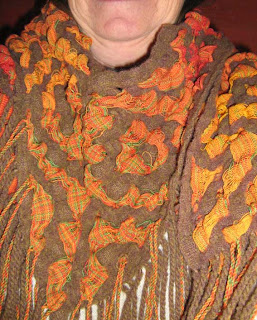 There is another method to weave V-shawls, one I have heard of, but never tried. As I still thought it would be interesting to make a V in this technique, I decided to try it.
I wound another warp, twice as long. Threaded the same pattern as the "summer skies" shawl, using 10 shafts.
Wove one "leg" of the V.
Measuring out warp long enough to cross the warp and leave some for fringes, I put in a couple of tabby shots, then cut off.
Re-tied, wove the other leg of the V.

Now, the exciting part: trying out a new technique. It sounds easy: put the woven part beside the loom, take one cut end and weave in. Take the next cut end, weave in. 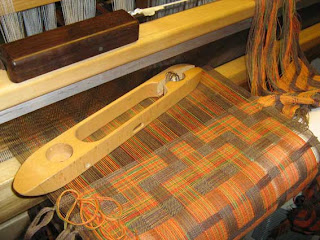 Well - it sounds easy, but is a little more tricky to actually do... I was glad I had made the tabby picks, I can tell you! I also was glad I had my special horsehair shuttle.

Just off the loom: 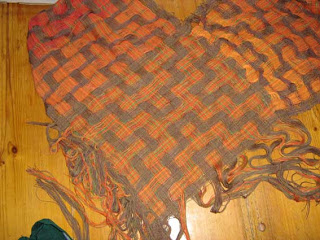 There was a lot of "massage" required... it was (as I suspected) difficult to join the pieces with the correct distance.
If (big IF) I will ever use this method again, it will probably be with a piece of more "normal" cloth (normal, as in woven all the way to the edge...)

After wet finishing, it looks quite ok - IMO, of course. (Those sharp of eye may notice that, in spite of trying to concentrate, I managed to join the first woven leg with the reverse side up...) 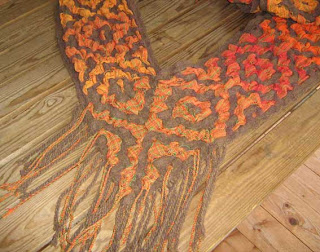 When this was just made, I thought it would be nice to make a V-shawl in the same technique. Someday.
The day dawned. Now it was autumn, and the yellow-green-orange leaves looked inspiring. 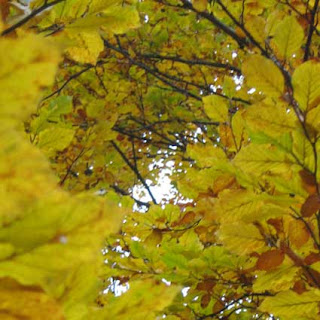 As the "summer skies" scarf is an 8-shaft design that in reality requires 10 shafts (2 extra shafts are needed for the rightmost stripe, if you don't want to cut the weft after every cotton block...), and I "only" have 16, I had to find a design that takes 6 shafts + the two extra.
I thought that would be a piece of the proverbial cake. 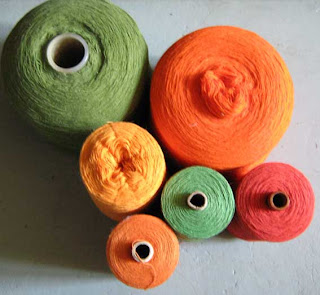 Before I had the design done, I selected the yarns, and wound the warp. As it was an experiment, I settled for scarf width, rather than shawl width.

The designing proved to be difficult - there aren't many designs possible with only three blocks. But, as I already had the warp on the loom, I went ahead anyway. 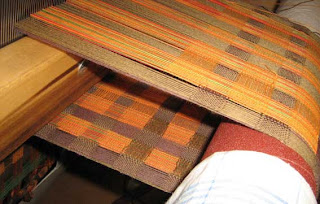 When I came to the weaving-together part I noticed that, somewhere, I had made a mistake... but, perhaps, it would not look too bad after the wet finishing? 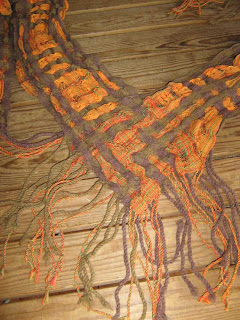 It did. Look too bad, that is... 6-shaft designs are not good for this kind of technique, the non-shrinking layer has to be more interlaced with the shrinking layer. The mistake helps somewhat - the strange assymetry adds some interest, but, on the whole, I consider this a mistake not to try again.
Posted by Kerstin på Spinnhuset at 13:18 No comments: 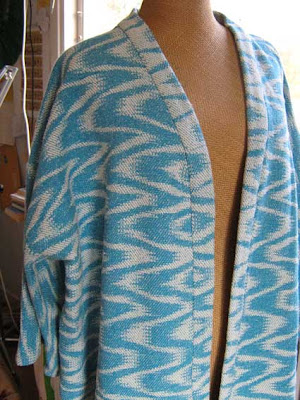 This is a bathrobe which is inspired by sea surf - the foam that washes in and out with the waves.

As I did not have much of the sea-coloured yarns, I had to plan the sewing pattern for least possible waste. I tried several layouts, but decided this needed the least amount of cloth: 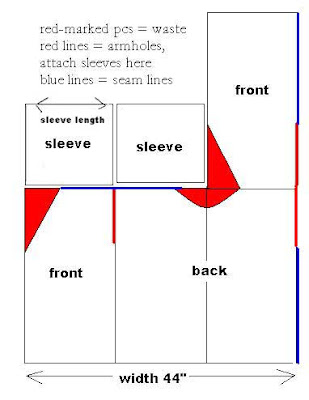 I would have liked to make proper felled seams, to make the robe reversible, but the cloth had too much bulk for that. I could have trimmed the seams with some kind of band, but decided on a "false" felled seam: trim and serge one seam allowance narrower than the other. After serging the other, fold it over the short one. Press. Topstitch.
This means I sacrificed the reversability.

Seam from the inside:

Seam from the outside: 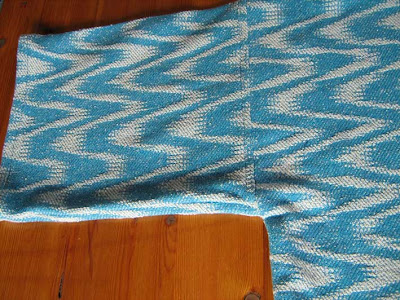 Details about the fabric:
The warp yarn is a “mystery yarn” I once bought at a flea market. I had always thought of it as being cotton, but when I started to handle it I decided it must be rayon. The thickness of the yarn is more or less like a cotton 16/2. I warped with two colours, and threaded them “random”. The set was 10 ends/cm.

Weft is a cotton bouclé, also of unknown number.The average thickness could be like a cotton 12/2, perhaps. For the tabby I used the two warp yarns, wound together. Pick count was approximately 8 pattern, 8 tabby per cm.

Here is the draft: 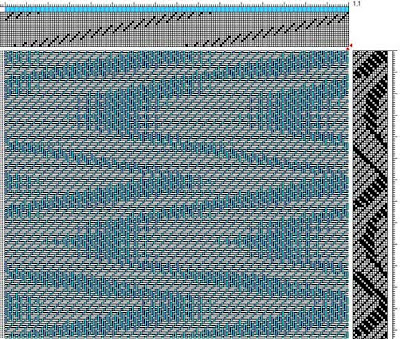 I added tabby, partly to lengthen the pattern, partly to reduce the bulk. Also I did not have to worry about the warp floats, which are on the long side for these yarns :-)

The fabric is slightly different on front and back: 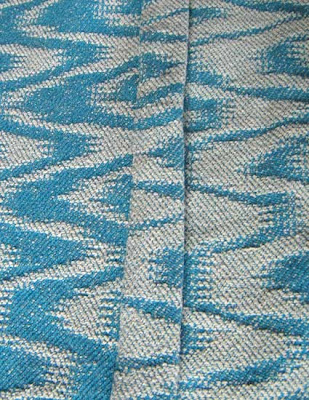 This robe was made in 2007, when our guild celebrated its 10-year anniversary. It was shown in the july exhibition - click here for more pictures. (The umbrella is also of my creation)
Posted by Kerstin på Spinnhuset at 13:43 No comments:

The 3-band shawl idea - now taken one more step. I wove it on the same warp as the sherbet shawls.
This is what it looks like, pinned to the wall: 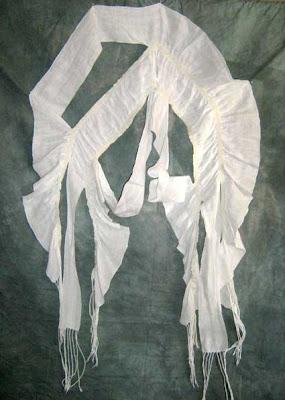 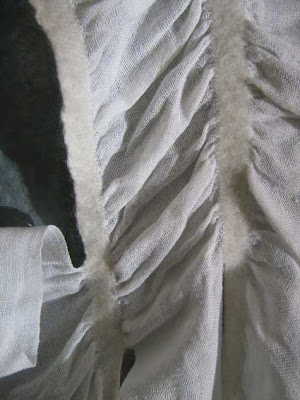 There are several possible ways to put it on.

First - donned "as a shirt" (both arms put through openings, with the full width as a back piece): 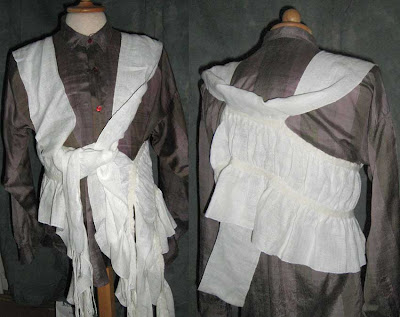 Second - with the head put through one of the long loops: 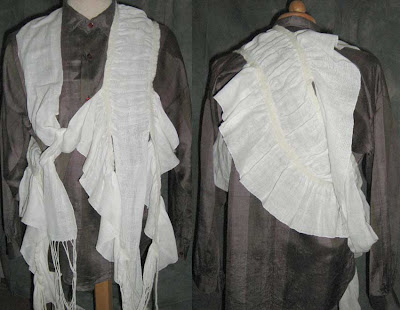 Third - one arm through 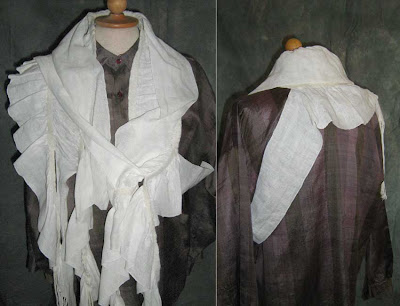 I still think this idea is worth exploring further, but next time I will probably do it without the shrinking stripes...
Posted by Kerstin på Spinnhuset at 15:21 No comments:

For this summer season I made a frilly shawl model - two narrow wool stripes in a cotton warp. When the wool shrank, the "frills" developed.
With a white cotton warp and pastel weft they look (to me) like sherbet and whipped cream... 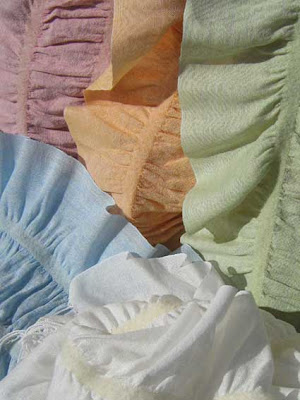 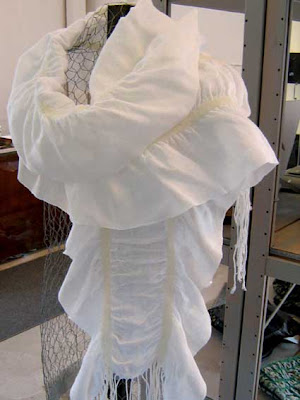 I used linen for weft, as an earlier experiment had told me that with a cotton weft, the "frills" got too droopy. 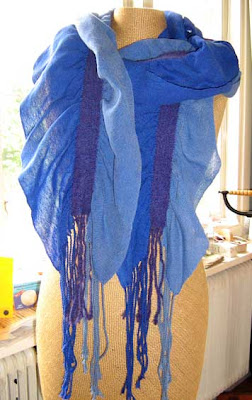 Earlier experiments also had told me that the wool stripes would not shrink if woven in plain weave. I have experimented with warious structures for the shrinking stripes, but I have found that 2/2 twill is good enough :-) 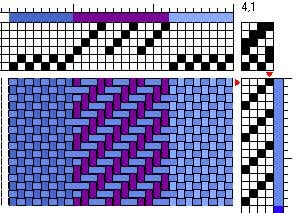