This is a top of my mother's: 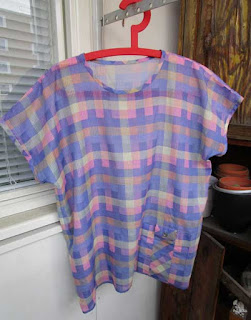 She made it ages (20? 30?) years ago, from a remnant. Assumed cotton, but who knows, these days? It has a lovely hand.
I have always liked it, and always thought, carelessly, that it must be some kind of crackle-ish structure (although, who would have thought industry would make crackle-ish fabric for yardage?).

So, getting one step nearer: 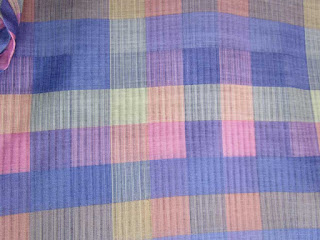 Hm. Compare front and back ('cos this fabric has distinctly different faces). 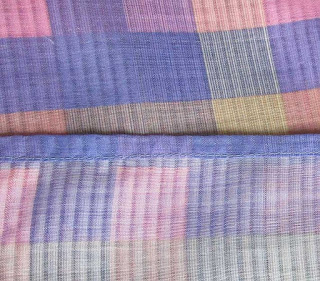 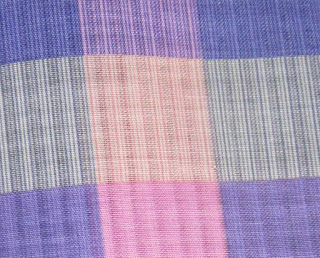 It certainly looks like plain weave, with a pattern of crammed-and-spaced warps... except is does have blocks of some sort?

Hm. Double hm. We can (sort of) see that the warp colours appear to change when the (weft) blocks change.
Or, that's what I think - 'cept I can't understand how, as the whole shebang still looks like plain weave... and the back doesn't really show any weft "blocks"?

The fabric can have been rotated, of course: white warp, coloured weft.
How many colours in the weft, then? (How many wefts can a modern loom handle? And it also has to handle the crammed-and-spaced effect.) And why weave something so complicated, when a multi-coloured warp and constant # of picks per cm would be so much easier? - could it be because this particular mill just had got this very ultra-modern loom, capable of handling a gazillion of wefts and varying the beating-up force - a kind of "because I could"-result?

Against the light (and now all pics start to be blurry... try holding a piece of almost see-through fabric I one hand, while trying to get your camera to focus with the other hand, and you'll see what I mean. First pic to illustrate my point... :-) 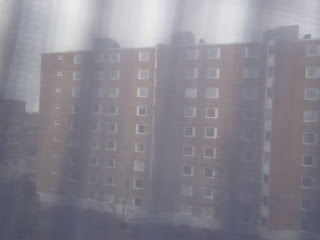 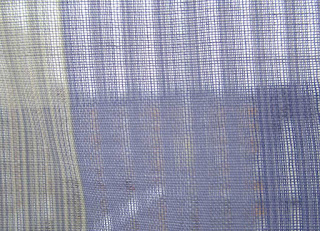 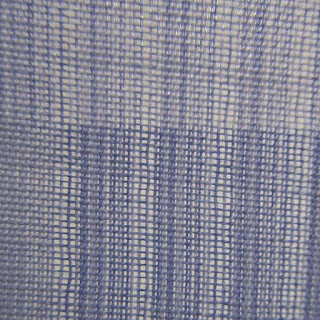 And in the last picture it looks like the cramming shifts... regardless of if in the warp or weft direction, HOW??? (click pics to biggify)

I still think it looks like plain weave, crammed-and-spaced, except it appears impossible to achieve the warp-stripe-colour-changes (that are, I think, essential to the overall colour block idea) with such a simple structure...

The warp colour-"changes" might be some colour-and-weave thing, with the warp being end-by-end... except that to make the "other" colour get to the surface - wouldn't that need a more complex structure?

EDIT: for those guessing at some kind of leno - no, I thought about that. Unfortunately the photos aren't sharp 'nuf to blow up more - .
Posted by Kerstin på Spinnhuset at 10:40 4 comments:

my new, ok a new, website, of which I happen to be responsible: Bergdala glastekniska museum.

Most pages are still in Swedish only, but some have been translated. The link takes you to the start page in English - for Swedish, click the "på svenska" in the upper part of the navigation column.

As my glass English is not the best (I have been using this page a lot, but what do I know...?!?), I hope you can help me out... all and any thoughts and comments are welcome!

Due to other concentration-consuming activities, I totally forgot about "April spools day" this year.
So, a bit late, a picture to combine spools and glass: 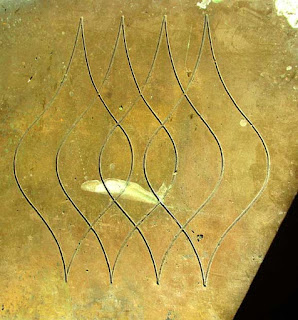 This is a plate used for pantographing a pattern onto several (in our case 24) glasses at the same time, making them ready for acid etching.
(On the off chance: should anybody "out there" recognize the pattern, I would very much like to know "all": name, designer, time, picture(s)...)
Posted by Kerstin på Spinnhuset at 08:36 1 comment: