It was a nice and sunny day... 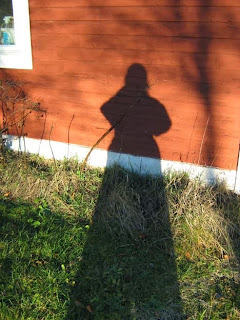 and we decided to take a little trip. Once we reached the destination, it was much colder and windier than at home, so the walking was cut much shorter than we had thought.
When we saw the sign to a flea market we hadn't been to, we went there instead.

On top of a shelf I spotted something 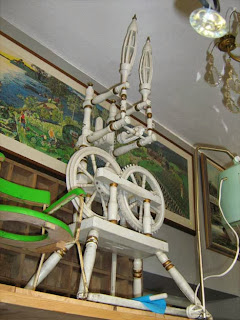 It lacked one of the flyers, the paint job was sloppy and it was too expensive for a decrepit, albeit interesting, spinning wheel. Then I spotted the other flyer, found that the bobbin turned freely and the drive pulley screw was not rusted - and it was threaded for spinning S.
So I took it down.
Everything that should turn, turned. Some things not supposed to move, moved a bit too much, but on the whole, it seemed to be (nearly) in working order.
It came home with me.

On further examination, the paint job was more than sloppy, and also consisted of at least two different paints. The outer white flakes, under that there is another (whiter) white. In some places the inner white has flaked, too - there seems to be a reddish paint under that.
At least the outer white was painted on without disassembling, but I managed to unscrew the flyer assembly with patience and some grease.

The missing left flyer's what's-it-called (the leather pieces) will take some fiddling to replace, as they, too, are "painted in".
Also the drive wheels will not come off, because they are secured in place with nails in the back, and one of the, hm, "stops" on the front is missing, too.

The "accelerating" drive wheels are interesting. I have seen something like this many years ago in Ångermanland (which, perhaps, tallies with the "prime linens"... Grenander wrote some about double-flyer wheels, but of course I have returned the book now. Maybe I have to borrow it again...). If I measured correctly, the fast wheel has a ratio of 2,5 compared to the slow. 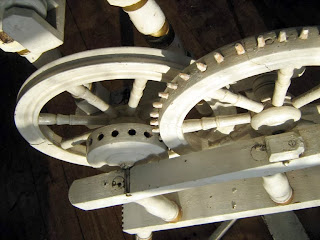 I suppose this is the tensioner for the drive band. It moves freely, fastens with a wedge. (Hmm - wedge? Really?) But how it the drive band supposed to go - over or under? If it goes under, it is difficult to replace, as the pulley doesn't come out? 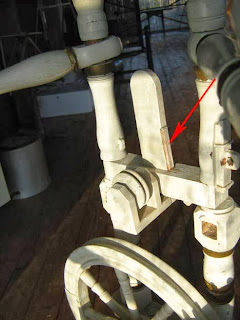 And, at the back there is this little thing, about 7-8 cm, pivoting not-quite-in-the-middle. What can it be? 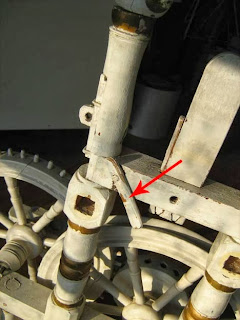 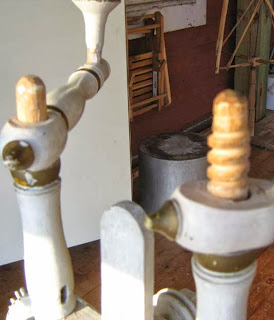 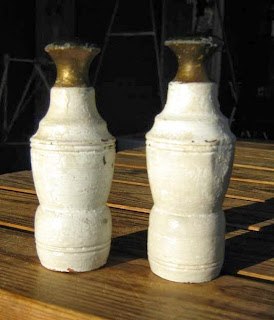 And the flyers are painted, too. Even the hooks. 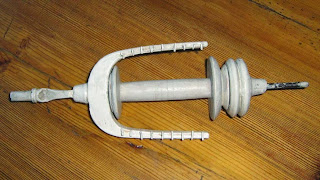 On double pulleys and no horses (warning, long)

(I should have been sewing, but the pins are too fiddly for the wrenched wrist. So I have been reading, instead.)

I started with Gertrud Grenander-Nyberg's Lanthemmens vävstolar (1974, ISBN 91-7108-076-7). On pages 287 f she writes about double pulleys (my translation; my comments in italics):

For plain weave, threaded on four shafts, there was a pulley type seldom used nowadays, namely two pulleys mounted on the same axle. The pulleys can be of different size. For the tying, the outer shafts were tied with the cord over the bigger pulley, which made the shaft tieup clearer (simpler?)

Important words here: CAN be of diff size. In most (all?) pictures I've seen they have been of the same (or so near the same as possible) size. (Had they been different size, they could have been called "horizontal dräll pulleys"? Has anyone seen an example of that (ie with more than two pulleys)? Edit: here.

The Finnish textile technician Helvi Pyysalo has showed that two pulleys on the same level can be used for four-shaft even-sided twill by connecting shafts one and three over one pulley and shafts two and four over the other pulley.
With this method follows that, when the shafts are lowered in pairs in four different combinations, the cords on both pulleys will move, which is (recommended, necessary? - "good") to get a clear shed.

I don't understand that: does she say that for EVERY shed on a CB loom "both cords should move"? If so: why?? Or what is it I don't understand here? With one pulley and horses that is not always the case, but sheds can be good anyway.

This can happen not only with two pulleys on two axles on the same level but also with the pulleys mounted on the same axle like on a double pulley.

Is there a difference in appearance in the two described above? (for "double pulley" she uses the Swedish "parblock", so in the text there is a distinction between the two types here.) ETA: see picture here.

It is likely that the double pulleys were used in this fashion in older times for weaving even-sided twill. With the pulleys on the same level the upper tieup was lower than if it was accomplished with several tools on different levels. Double pulleys were therefore an advantage when using the oldest looms which have low castles. This can be an explanation to the numerous double pulleys from the older times.
Nowadays, for four shafts, usually only one of the pulleys is used in combination with horses.

Background, about "premielärft" - roughly "prime quality linen cloth": in 18th century the "powers" divided the country and decided Ångermanland was the region to grow flax and (spin and) weave linen. To make the people more enthusiastic about it, certain standards were set, and those who fulfilled them got extra pay.

Anyway. According to Grenander, weavers of prime cloth were specialists, using special looms. Those looms were often shallower than "allround" looms - sources from the time state that an allround loom was usually about 2 1/2 aln (about 5 ft), while linen looms were only 2 aln (4 ft).

The reasoning behind that is (apart from the fact that German linen looms often were shallow) that the "free" warp is shorter, and therefore less exposed to wear (p 99).

Something I don't understand here: as linen is not elastic, shouldn't it benefit from a longer "free" warp, by distributing the stretch over a longer section?

(She goes on to say that plain weave needs less loom-depth than multi-shafted cloth, which is of course true.)

She also thinks that the double pulleys, at least those with short uprights, were used primarily by these specialist weavers.

(To me it is not clear exactly how she came to that conclusion.)

On p 103 she writes that, because of the fineness of the prime cloth, the warps had to be distributed over four shafts, and therefore the double pulleys were "the most efficient". Thus looms with double pulleys were, together with very fine reeds, the most typical tools of a "prime" weaver.

I'm still unsure of why double pulleys are "the most efficient"...

Anyway, it is apparent that she has changed her mind over the 25 years between her thesis and her last book - from thinking that double pulleys were, in effect, "old-fashioned", to thinking they were the mark of a specialist.

And this, my friends, was all handspun singles!

In Sweden, everybody knows how to tie the horses. They "must" be parallel, but opposite - like this:

(well, they can be the other way around,too)

Then I found a picture on the 'net - a picture that can't be copied, only linked to.
From what I can see, the horses are tied in a pattern I have never seen before:

Let's see if this gives the right photo:

This photo of Museo-Laboratorio di tessitura a mano Giuditta Brozzetti is courtesy of TripAdvisor.

Or is she using just three shafts? I can't see the fourth, but it also does not look like the horses are tied two-to-one-shaft...
If they are, they still look like a "different" style.

This is how three shafts "should" be tied, according to Swe traditions:

Either tie one shaft to both ends of one horse, the other horse to the two other shafts (works best, IMO), or tie both horses to the middle shaft.
Posted by Kerstin på Spinnhuset at 16:00 2 comments: