Time for the V. Maybe I'm just out of practice, but I thought I had problems I don't usually have. 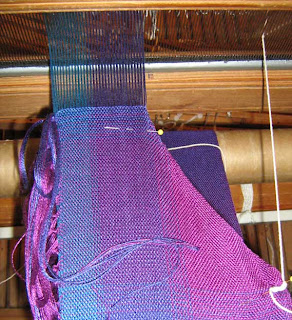 Also, my usual finishing manipulation was nearly impossible because of the tight sett. (The fold often needs slight adjustments to some of the ends.) So, for short, the "dry finishing" took a lot longer than I am used to. And I had no idea whether I could clip the woven-in ends or not. (In the end I did not) 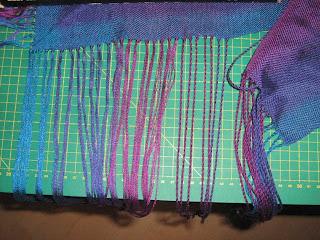 Finally, it was done, and all fringes were twisted.

Before wet finishing, two things were very noticeable: it was extremely sturdy, also very heavy.
Into the washing machine it went, and came out feeling much the same. No shrinkage, no blooming (but I knew that). Also no drape...

Pressing did a lot. Now, it is still heavy (of course), but it does not feel "sturdy". It also does not drape as I had expected (but it is plain weave, which does not exactly help - but from all the "rave reviews" I had expected more.) I may have to try mangling it, but that is for another day.

I wonder how the knots in the fringes will hold up? They look half-chewed-up just with the first washing. How does the rest of the world treat tencel fringes? 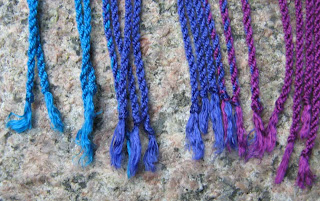 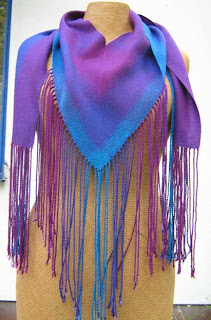 - And, I may have invented a new way of wearing a small V: 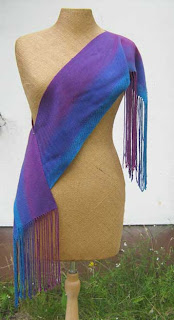 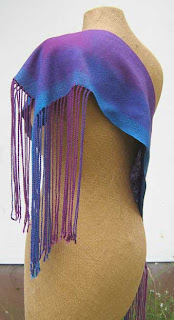 So what have I learned?
- Tencel is not a forgiving yarn, so it is probably not a good choice for V-shawls.
- Tencel is heavy, which means I will want much finer, if I'm going to weave something "serious".
Which adds up to: I'm not a convert (yet). (But I have a cone of white 30/2...)

For Charlotte: this yarn was given to me by Laura Fry - I asked for it, just because I haven't seen any Scandinavian place offering it fot sale. But it is supposed to be produced in both the UK and in Austria...
Posted by Kerstin på Spinnhuset at 12:20 2 comments:

The three cones of tencel 8/2 had been sitting on a shelf for maybe 2 years.
Now I wanted to make a smallish V-shawl, and I thought maybe it was time to try this yarn. There has been lots of talk on the 'net, and maybe 2 years is a suitable ageing time - .

No way I was going to warp with just one end, but, at the same time - to make three spools of just a couple of meters each - so I just made one extra spool of each. And it linted... I noted also that the yarn had a low twist.

So I wound a warp of about 180 cm. The recommended sett was 20 ends per inch, which converts nicely to 8 ends per cm. Pre-sleyed, ready to "beam": 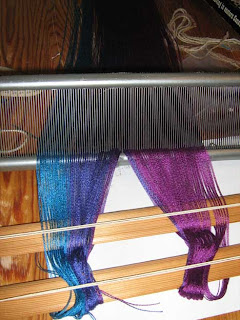 Beam, in quotes, because on my extra long loom a warp shorter than 2 1/2 metre will not reach the beam. There are ways to fix that, of course: 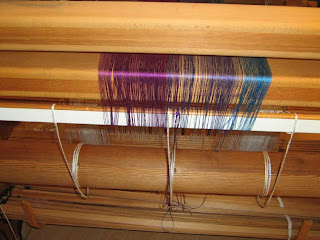 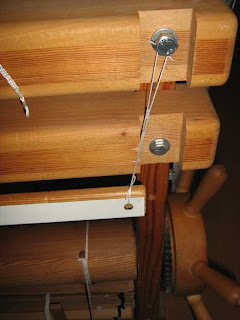 Threading a warp that is not stable takes some extra care, but is not really a problem. Threaded, sleyed and tied on - a few picks of each colour in the top layer, to determine which to use as weft: 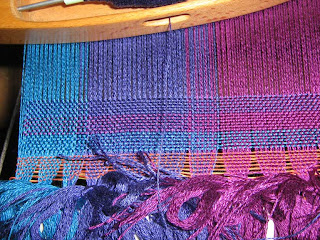 Weaving the "arms" was quick and easy - but the warp felt somewhat dense. OTOH, tencel/rayon is slippery, so it probably would be OK. And, after all, the whole piece was to be seen as a sample, anyway. Interestingly, it linted less when weaving.
Posted by Kerstin på Spinnhuset at 11:36 1 comment:

When you are a success...

... you get asked to let your exhibition hang for another month. 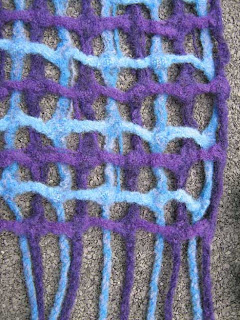 (Actually, I was their "last resort". The exhibitor planned for August had to resign, and they like to have something going on. And I certainly do not complain!)

Maybe this is a better option (if, of course, I can work out a system - wool, linen, cotton, or perhaps red, yellow, green?) 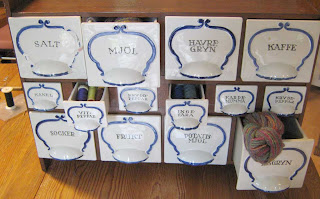 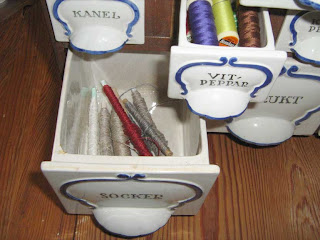 Time will show... it's a long time to next April - assuming Meg will host another spool's day.

Posted by Kerstin på Spinnhuset at 18:32 No comments:

And just because I managed to capture the sheen of mangled linens (in the last post), I'll dedicate a whole post to just them:

The picture is turned to make it as big as possible - click to make it even bigger!
And yes, they are different - I often like to make "families": the warp stripes are fixed (of course), but the weft stripes are varied - one placemat has even-sized stripes, one is "tromp-as-writ" until the size was right, one has just two sizes of stripes and so on.

A word I have problems with

Whatever is the correct English - today I hung my exhibition at the library in Lessebo. It has that title... say: Checkered? (with the question mark) 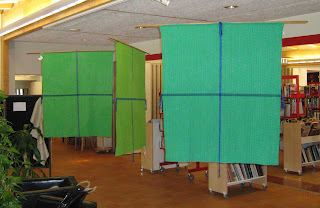 These have been published - find them at Weavolution (or, for Swedish readers, as the weave of the month for June 2010). 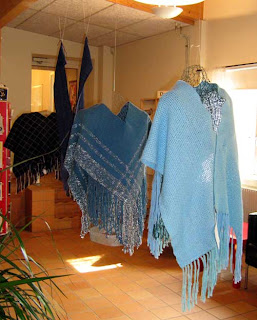 4 V-shaped shawls.
A detail showing the "silver" coins in the small one (which also shows the, er, inconsistencies): 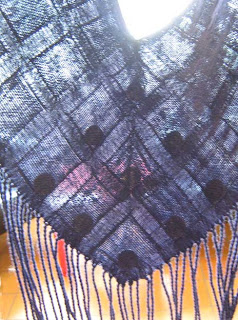 (You can read more about these here and here.)

The back wall with morse shawls - not a good photo, I'll have to get another one: 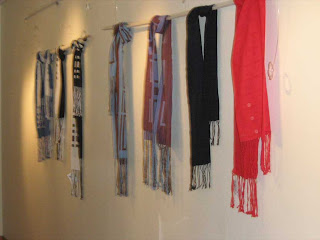 I now have another picture, but I'll leave the unfocussed one for the "overview" idea. Here is the new pic: 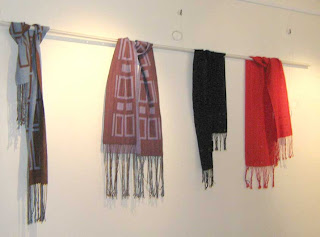 (And I still coulndn't find a way to redirect the spotlights - the ladder was too low, today as it was the other day... I did try to poke at them with a stick, but that wasn't "precise" enough. Oh well.)

And a couple of the screens -one with a "stone wall" 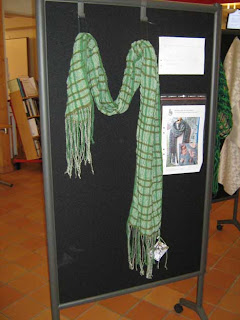 and another one, showing "checkeriness" (is that a word?) of a turned satin (handspun linen - mangled, of course! 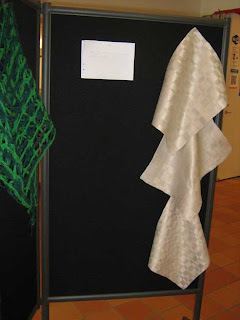 There is also a chair and some miscellaneous double shawls 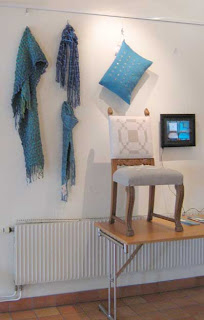 There may be a "program" or two - watch this space.