I have been pondering possible changes, to make it into a clothing quality. Could I use a thicker yarn, or two ends per heddle (would perhaps give a little more flexibility/"drape")? Or could I just sley denser? But would the binding (structure) work at the extremely high sett?

There was still lots of narrow white warp left, threaded to an 8-shaft point. I re-threaded about half to have two ends/heddle, then sleyed the 2/heddle as 2 working ends/dent; sleyed the other half with some with 3 ends/dent, some with 4/dent (which, nominally, is the same as the 2/heddle part).

The result? I think that the 1/heddle, 3/dent and linen weft may be a good place to start. There will have to be a bigger sample woven and properly finished before a final yardage is woven, though. 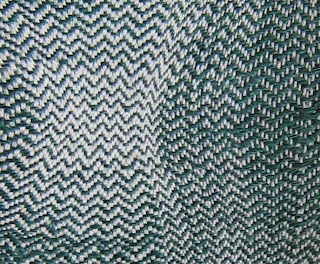 Daff completed, and handed in. (There is to be a big jubilee exhibition for Hemslöjden Kronoberg 100 years)

Hung as a curtain, to show how much light it lets trough (left), and as a room divider: 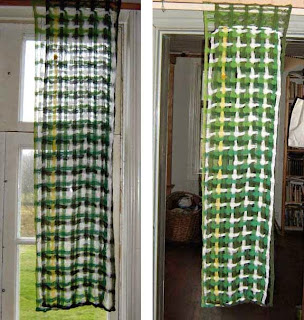 Here are some construction details. First, if there has to be a hem at the bottom, the layers have to be woven separately. I also chose to weave them simultaneously, to make them even at the bottom. Thus, the start sequence:

It could be done with only one pick at a time, but it is so much faster to weave two picks in each colour.

When the hems were long enough, I switched to the "body plan" (here shortened; I had 24 ends/picks per layer). I put in three "empties" between colours. The turquoise pick in the middle is to remind me to (and facilitate) pass the light green shuttle from top to bottom, to match the unwoven warp. 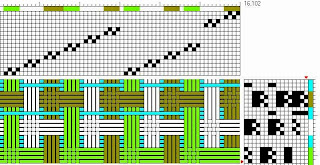 When I got to the upper end, I wanted to make a sleeve for the mounting dowel (provided by the organizers). Decided to end the middle, white, layer with a hem in the middle of the sleeve. This meant a white-hem-but-outer-layers-going-on (still shortened): 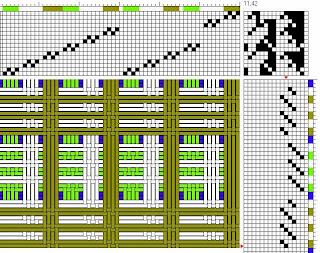 Which then gave way to the two just-green-with-empty-distances part: 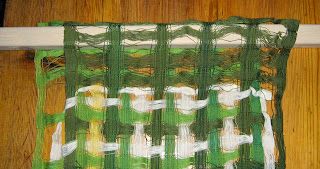 Yes, I did not need to use 12 shafts, but from the beginning I had planned for a different enlacement of the "layers".
(I did weave the whole shebang "backwards", according to the software: "reverse direction) 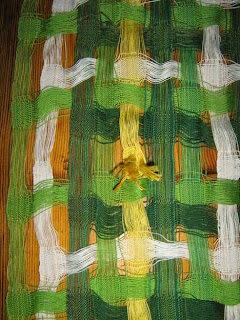 (And nobody has commented on the hems... yet)

- maybe I should also add: 100% cotton, 24 ends/"column", also per inch, same in weft. Yarns used were mostly 16/2, but there were several both fatter and thinner, total of maybe 12 colours/nuances.
Posted by Kerstin på Spinnhuset at 10:29 6 comments:

A moment of suspense

Done: hemmed (but not showed to the hemming police, so it might still be rejected), put in mesh bag, put in washing machine.
Out of the machine. 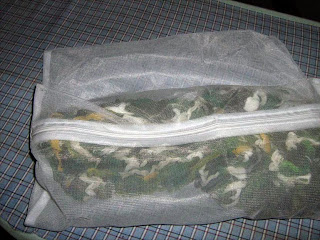 Dare I open the bag? Deep breath, shake fingers to loosen them up, get the pins at the ready... 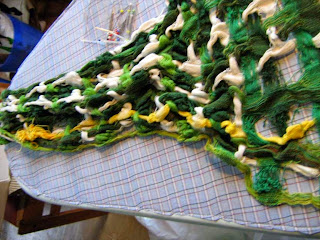 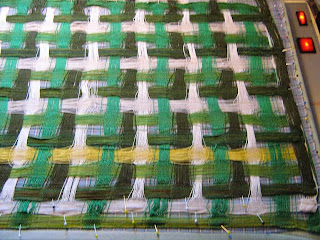 I pinned it from the bottom, for as far as I could get on the ironing board, pressing (but not really hard). Folded gently, pinned next section...
Got to the top, where there is (will be) a sleeve of sorts, for the mounting dowel. 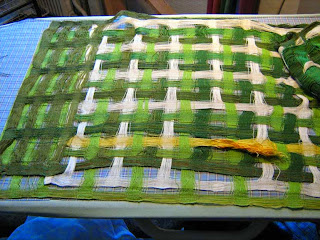 There are two snowdrops and one daffodil, but I haven't yet tried to untangle the "petals". 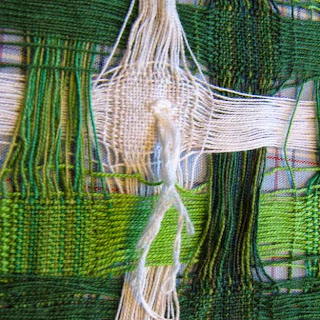 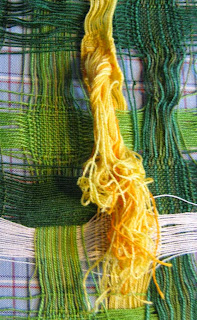 Now it is hanging over a shower rod to dry.

As there is more warp on the loom, and as one never can know what happens with the weather (and thus with the outdoor daffs): 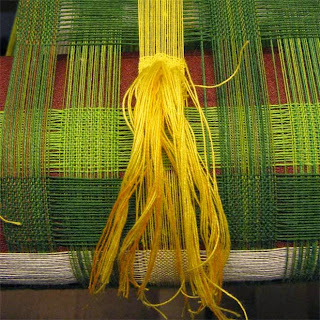 I guess it will be trimmed some, before the whole thing can be called finished :-)

The first snowdrop, the first daffodil and a mystery solved

The first snowdrop is outside the front porch: 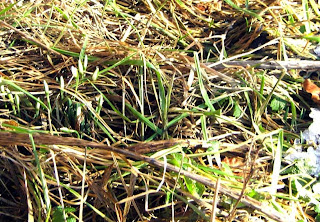 On my other blog I have a label for the first snowdrop. I haven't had that label for more than 4 years, but it sure seems as if they start earlier and earlier...


"The first daffodil" (which may come to be the title of what is on the loom): 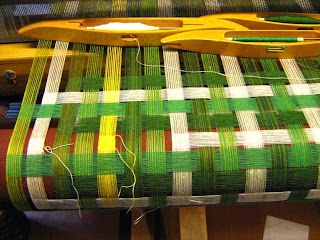 
And the mystery:
I have noticed that hand-throwing shuttles on the AVL makes me tired much faster than on weaving on the old CM.
Today it dawned on me: the shuttle race is in the way!
On the CM I can hold the beater away with the thumb of the catch-hand, and put the hand with the palm under the shed opening. This way the shuttle flows right into the hand - but with a shuttle race, I have to catch the shuttle as it comes along the "shelf".
Also, the AVL beater is heavier than the other, so the thumb has to stay in its "holding-away" position a tad longer. So to catch the shuttle, I have to do the actual catch with the fore-finger on top, which in the next instant means I have to shift the grip on the shuttle to be able to throw it into the next shed...

(I tried to get a pic of this, but would have needed an extra hand for the camera)

... and some commentary, now on my website: here for English, here for Swedish.

If you see something wrong, or disagree with me, please send an e-mail (link on the page)

I have also some older texts for download (they are all on the page, but in the middle of the text) - collected here (English version, but there is a "button" at the upper left for toggling between languages. In fact, the button is there, same position, on all my web pages.) 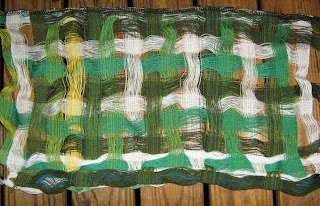 The warp is on the loom, the serial-to-usb works even for weaving proper, but the structure will be changed some.
Maybe the result will be called "the first daffodil".

(Sample above is hemmed but not wet finished. Once I saw the hemming idea worked, I was just interested in the float lengths vs how I think it will survive the "muggle" handling. Decided shorter are better.)