More on patents and mangles

Jean noticed what should have been obvious to me, too: the patent drawing is different from the "real thing". This made me read the patent text more carefully - and it turns out that the machine in the drawing probably was never built. It is couched in some complicated language, but essentially the text says "this is one possible construction".
Last, in the text, are three patent claims (is that right? "patent wishes"?) - 1) a tabletop mangle with a lower roller lifted with help of a two-armed swiveling lever and a spring, 2) same as 1, with the addition that the two-armed lever is angled and 3) same as 1, with the addition that the arm which connects with the spring is longer than the other arm.

Here are a couple of detail pictures: 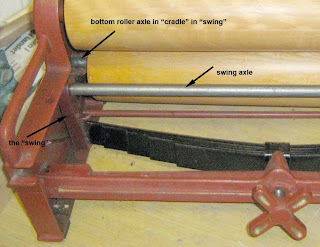 How the spring is mounted: 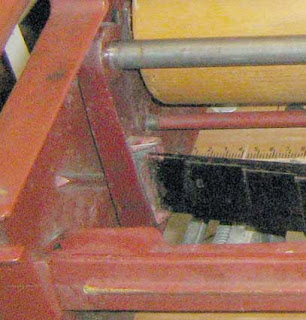 The rollers (and the "swing", or two-armed swiveling lever) exposed: 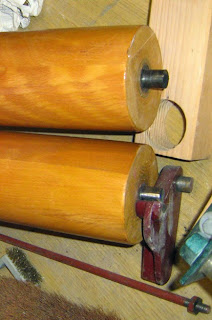 (yes, the picture is turned - this is the way the rollers go when the mangle is operational)

And now we all can see that the actual construction is even more different from the patent... And, yes, it is the right patent, because the patent number is written on the side piece: 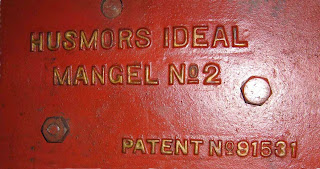 As for "apron" or no apron - I don't know. Before the mechanical mangle, there was the roller and the "plank":

Anyway, from what I have read, these were used either "as is" or with a special "mangle sheet": roll the cloth (with or without the protector) as tightly as possible onto the roller; grab the board, lean hard on the board and roll in the same direction as the cloth had gone on; when you reach the end, slide the roller back towards you; repeat.

Next came the box mangle - like this or this (or, for the scary pictures, this!). From what I understand, one of the ideas with the mangle sheet was that you could load several smaller pieces in one go - but I think that it also helps with the "sheen".

All the older "small" mangles with the big spring on top I have seen have been without apron. Come to think of it, mine may be one of very few having the apron.

All modern mangles have it, though.

As for adding one: I think the important bit is getting the roller smooth again - no ridge, no screw heads...
Posted by Kerstin på Spinnhuset at 11:15 2 comments: 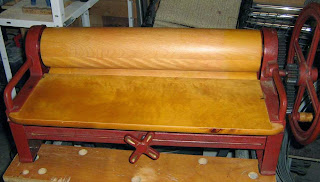 this one compact, and patented.
The patent is interesting, as it is granted in 1937, but valid from '34. It contains a drawing, a very enlightening one (as you can see): 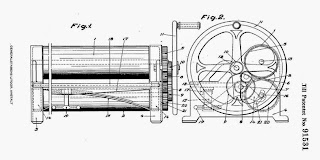 It was a bit fiddly to get apart - and I couldn't get the right-hand piece off. Or, well, I decided I did not need to get it all apart. (The cog wheels are very securely mounted) 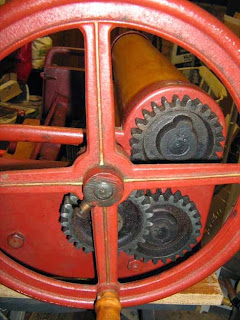 (So why take off the left-hand piece at all? 'Cos the rollers needed some work, that's why.) 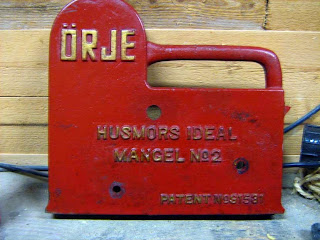 The spring is, well, a standard one: 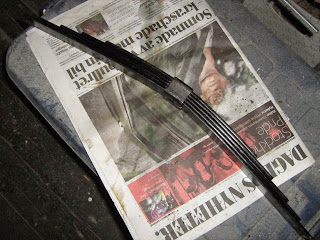 There are some "golden" details: 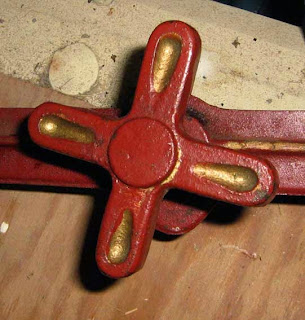 The rollers, after some sanding and lacquer: 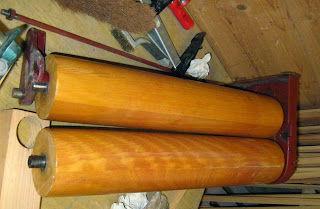 Now all that remained was to put it together again. Should be a piece of cake, yes?

Well.
It really wanted to have four pieces in four holes at the same time - the back connexion rod, the upper roller, the bottom "swing" for the bottom roller and the front "spring-holder" all connect to the left side, plus the bottom roller needed to be in its cradle on top of the "swing".
Everything would really have been easier if I could have had the spring in place, too, but I only have two hands... After much fiddling (and some new words) I managed to get the spring in place, later. (This type of spring isn't one one just "wrestles" in place.)

Before putting the table in place: 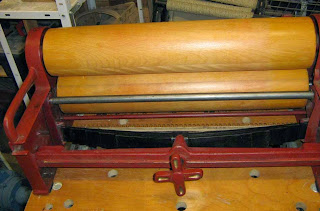 (When do I have 'nuf mangles, you ask? Well, I like to rescue them - and on occasion I do re-home them. This one has just moved to Denmark, and I might consider selling this one, too - weighs about 25 kgs, so pick-up is a good idea...)

Picture perfect - but I forgot :-(

Meg (over here) called all weavers to publish "beauty shots" of something woven.

I decided to participate, but... I forgot. What can I say? Old age, other things to occupy my mind, or just hopelessly sloppy?

Anyway, too late or too late, here are my contributions: 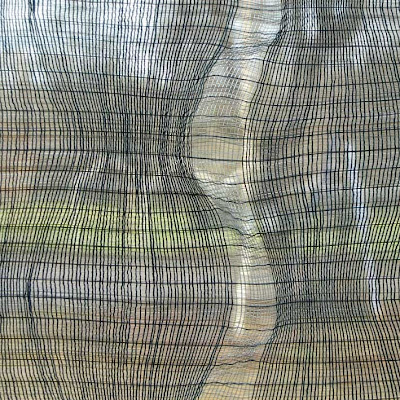 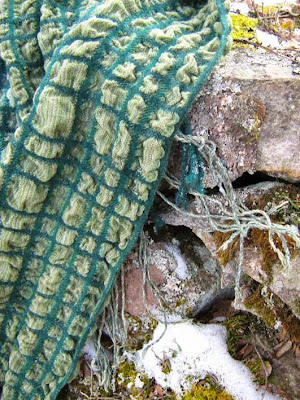 More differential shrinkage ('cos it photographs well... or, at least, looks interesting) 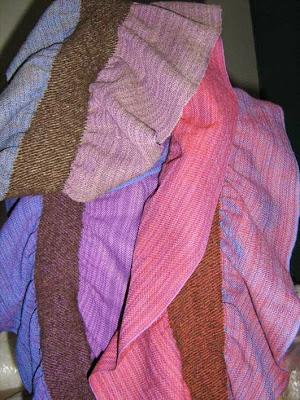 Even if I am too late, kudos to Meg, and get over too look at the other contributors! (link at top)


Last year, when Laura and I were in Macclesfield, England, we saw a small piece of cloth described as "double-sided damask", also said to be "the same technique as used for cloth of gold". I had never heard of "double-sided damask" - to my mind, the nature of damask is to be double-sided. Jean gave me a tip: Murphy's "A Treatise on the Art of Weaving" (1824), but it is too complicated for me to understand. (Yes, I *have* tried several times :-) So I just dropped the problem, after all we have all seen strange labels in museums, yes?

However, yesterday someone posted a link to an article in NYT (or something), I went on from there and landed on the site of Thomas Ferguson Irish Linen - and they have a definition of "double damask" (link goes to the definition of "ordinary" damask, but both come up on the same screen).

I'm copying some of the text, and want discussion:


Linen damask is a figured fabric made from one warp and one weft in which, generally, warp-satin and weft-sateen weaves interchange. Twill or binding weaves are sometimes introduced.


I have no problems with this - sounds like "ordinary" damask, which incidentally is double-sided, or maybe I mean reversible.


What is the difference between Linen Damask and Linen Double Damask?

Double damask is different from ordinary damask in that it has a lower warp thread count than weft thread count; this allows a dense high thread count fabric to be produced, as the weft yarns are beat up tight in the fabric. However, it is a much more expensive way of weaving because it takes longer to weave a given length of fabric. Also, to allow this dense packing of yarn a looser twill weave is used than in ordinary damask.


(there is some more text, but this will have to do for now. You can always use the link above)

So: ordinary damask is a warp-faced structure contrasted with the same structure, only weft-face, regardless of "thread count" or "balance" (same # of ends and picks) - but double damask is UN-balanced? And therefore better, because it has more picks than ends? And it is (always?) woven in twill? Because twill is a "looser weave" than satin? Huh?

Further down, they mention that they use finer yarns for the double damask, which gives better pattern definition. I am OK with that, of course finer yarn give better definition, but...


As stated earlier, to allow the dense packing of yarn, a looser twill weave is used when weaving double damask than in ordinary damask. This requires a high thread count to stabilise the fabric. With a low thread count this was not the case.
These poorly made fabrics were sub standard, and normal damask was in many instances a better buy. This forced the hand of the Irish Linen Guild and they brought in a minimum thread count for double damask.


(Unfortunately, the Irish Linen Guild does not tell what kind of counts they used for their definitions - at least I can't find them.)

Conclusion: still confused, perhaps more than before (when I could still blame the museum label).

Or: can it be another of these different culture, different language things again?
I sometimes discuss fabrics with my neighbour, the cloth merchant: he is a textile engineer, trained in industry. We can usually (but not always) agree on plain weave, but in industry there are (apparently) so many more parameters in industry a "trade name". (Edit to make sense!)
Sometimes they (he) use a structure name when they mean to include a lot more information: fibre content, weight...
And sometimes they use a structure name for something quite different: "cord" comes to mind. At least here I Sweden a "cord" in a fabric shop is what we weavers usually call "corduroy".
In the UK, a "corded silk" (at least in conjunction with academic dress) is typically a warp rep, very seldom woven of silk. (Yes, I have analysed a piece, and burnt it.)

Words and their meaning

or: can a dictionary ever be enough?

This is going to be difficult - trying not only to write in English, but also trying to understand whether cultural differences also influence the meaning of seemingly easy words.

I have been hanging out on different internet forums since '96 (I think) - most of them using English as the common language, most of them with a majority of participants from north America.

On to the next word. "I am restoring this new-to-me-loom - it isn't complete, so I'm going to buy a reed."
I (the Swede) understand "restore" (in conjunction to things, such as spinning wheels and looms) to mean essentially "repair", "mend". The first online definition I find says "bring back (a previous right, practice, custom, or situation); reinstate", and the first 8 synonyms are "reinstate, return, repair, reinvigorate, regenerate, mend, restitute, reconstruct".
Not one of these words indicate (to me) "buying a reed", ie get a piece of equipment that, while being essential to the functionality of the item, is something not "native" to it. There are so many different reeds out there that I would never consider using (and many of mine that a rug weaver would never consider using) that to me it becomes apparent that a reed is not "native" to a loom.

I have come to understand that "restore" is another word with many different meanings. Cultural differences or individual? (I'm not talking about sawing off a rotten piece of wood, to replace it with a sound piece, here.)

Or - a "principle": to measure a warp. Whether it is done by using a mill or a board (or a myriad other "methods" used around the world) is a question of "method". Or?

I have written about "weave structure language" before, here and here, so now I will only include five "very different" tieups.

Question of the week: are they different, really?