Spotted on a countertop:

a different take on block weave. 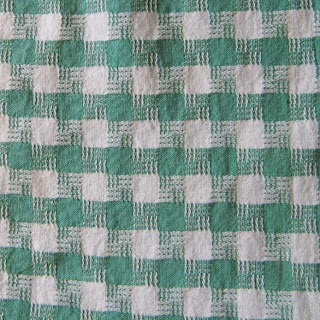 I didn't have a measuring tape, but each (tabby) square is approximately 1 1/2 centimetre. 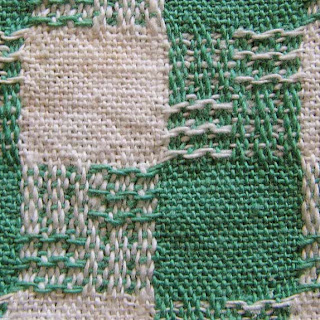 Also, I did not look ar the back - I just assumed it would be totally reversible.
Started to count threads, from the photo. There are 30 ends in each tabby square, and the patterned squares are "different" - there is a slight warp emphasis on the vertical striped part, but the horizontally striped part does not have the same structure.

Try as I might, I could not get the analysis right, or at least could not make a reversible structure.
I settled on a compromize: 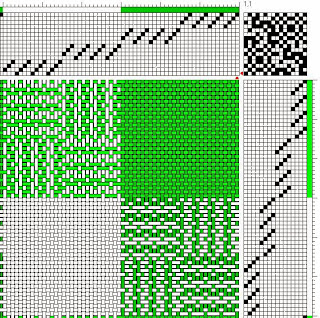 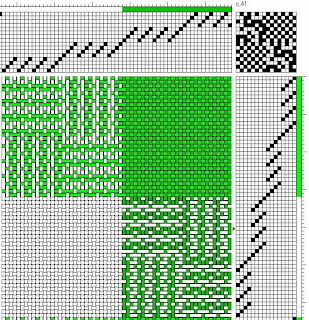 The patterned squares are now a variant of the "rackel" weave described on this guild page, combined with tabby - and I think it still gives the same overall impression (as the original piece of cloth) 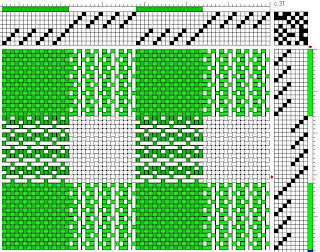 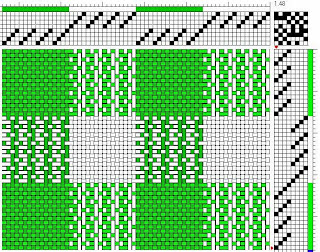 With cotton 16/2 sett at (say) 12 epcm, each square will be a generous centimetre square, after wet finishing...: 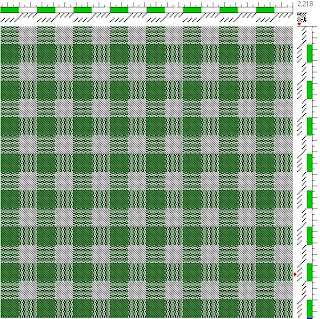 It turns out my DFW is a modified Mager clone.
(Who Mager is? Wait and see, I'll have to read the whole book first.)
It also appears that is it a flyer-lead, bobbin-drag (is that "Irish tension"? I always get confused about the brake type wheels and their terminology).
But there is still one mystery...

Here is the overview of the construction drawing: 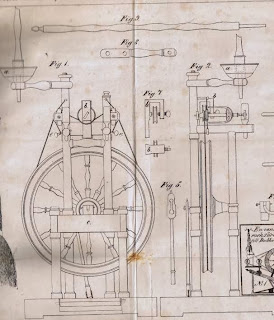 The tensioner pulley should be mounted top-down, and apparently wedged in place. (Though the wedge can't be seen, but there is no other fastening shown either) 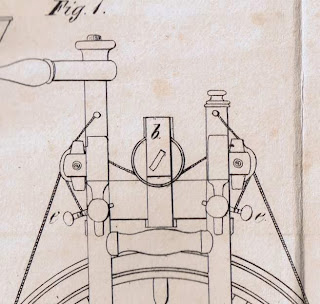 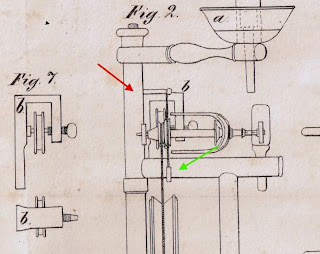 This explains two mystery holes I have - where the green arrow is, mine has holes on both sides. BUT: there should be holes where the red arrow is - holes pointing forward.
On the right-hand maiden (is it called maiden even if it is an integral part of the structure?) there is a hole on the outside, but on the left side there is no hole at all.
(And: "maidens" or "uprights" - they seem to be one and the same piece of wood going from the table to the top. No way these "maidens" have been/can be made to turn!) 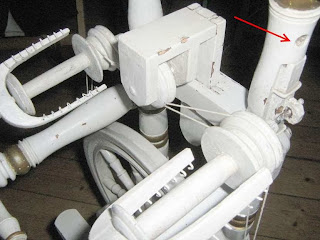 Speculating: can it be that there is just ONE brake-band, braking both bobbins at the same time? It would, I think, make the adjustment easier?

(And I still haven't made the axle retainers, so I can't try it out. Yet.)

Posted by Kerstin på Spinnhuset at 19:27 No comments:

Look what I found in a local, um, curiosity shop (she would be offended if I called it a flea market - ): 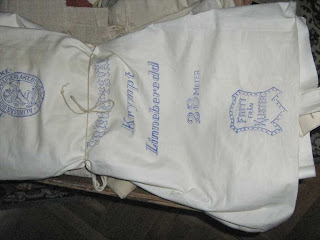 The printing says, from left to right: (logo) pillowcase material (with a rather odd spelling: örngåttsväf When was it spelled "örngått"?); shrunk; linen finish (what is that? Calendered?); 28 metres; free from sizing. (I should mention that it is cotton.) 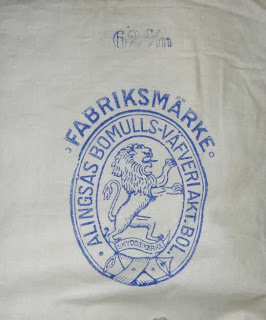 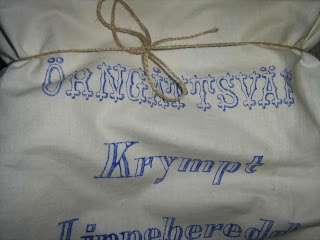 The "bale" now held 12 metres, according to the label. Even with a very nice hand, what could I do with 12 metres of pillowcase material (this means it is 62 cm wide - or 62 c/m, as the print says)? So I let it stay at the shop...
Because of that, I can't give you a thread count - but I doubt it is less than 40/cm. On the other hand, it is machine-spun.

Come to think of it - how many textile-y "everyday" words are there that are mis-used? Bed linens became cottons many years ago, but are still called linens. A friend of mine (a weaving teacher) says it is quite ok, that it is in fact standard in industrial parlance, to use the word "silk" for any very long fibre - extruded viscose, for instance. (Like "silk velvet")

Posted by Kerstin på Spinnhuset at 17:25 No comments:

What I have been doing - nerd alert


It all started with the DFW (Double Flyer Wheel).
I wanted to know where it came from (or, at least, from whereabouts in the country this kind of accelerated driving was known). I had seen something in a (borrowed) book - had to buy it for myself. Was sort of disappointed - there was a wheelwright mentioned, that much was right, but, as it were, only in passing. He had a name and a year (Abraham Hedman, 1738), but that was all there was.
I (thought I) knew I had seen something like it, many years ago, in a museum. Thought I knew which museum. Wrote to them. Wrote to several more museums, while I was "at it". Result: nothing, nada, zilch. A month later, ONE of the (by now 6) museums answered: "I don't have time to go out in the storehouse to look".
Meanwhile, I got a couple of obscure books on ILL, one of them very dull-looking: Den Ångermanländska linslöjden, en historik. (The linen works of Ångermanland, a history). It is a dull text, but once I started to really read it I found lots of, hm, nuggets(?). And lots of food for nerding...

I did several calculations, approaching from different angles, 'cos I was thinking I had made a decimal error somewhere.
But - all of them came up more or less the same. There were several examples described, and they all came out with a yarn count between approx. 120 to 150. Handspun!

A picture from the book, divided in two to make it possible (I hope) to read the writings. 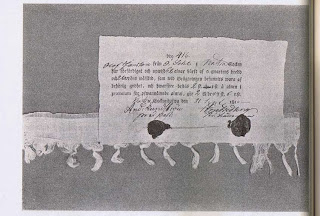 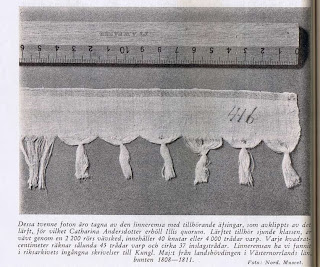 The caption says, roughly;
"These two photos show the strip, with thrums, cut off from the cloth for which Catharina Andersdotter got the Illis Quorum [a royal medal]. The cloth is of the seventh class, is woven through a weaving reed of 2 200 dents, contains 40 knots, or 4000 ends of warp. Every square centimetre thus counts to 40 ends of warp and circa 37 picks of weft. We have found this linen strip in the royal archives [... something "administrative" I can't translate] 1808 - 1811."
I wish... Or, on second thought, maybe not :-)

Nothing much. This book tells about several "spinning schools" and some competitions - it seems that the DFW spinners always won, but that did not convince "the people". One of the arguments was that a DFW is harder to spin on (heavier to treadle, needs more concentration), and therefore, even if you are more productive/efficient for the first hour(-s - the competitions were 2 hrs), you can't spin for as many hours as a "prime spinner" usually did. Right or wrong?

Anyway. I still don't know anything about my DFW, it still doesn't work (too cold to do what needs to be done on it, the workshop is unheated) - and the only accomplishment I have done is to amass a lot more "worthless knowledge".

Here is another picture from the book: 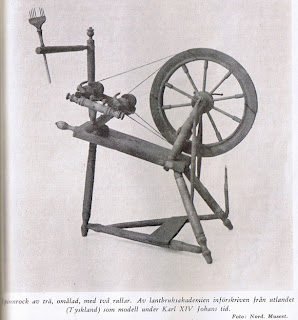 which shows another principle for a DFW: one MOA, two flyers. Therefore it has to have two drive bands, I think - and imagine tying two drive bands so that the tensioning works for both, at the same time...?!?

Waiting for more ILL books, and perhaps I have to do some "hands-on" museum search, and...

Yes, I'm still here.
And one of these days, I'll tell you about what I have been doing: nerding. (Can it be used as a verb? It certainly feels like it...)

Meanwhile, let me present one of my old spinning wheels, name of Findus (not a very good pic, but the best I could do - many discarded pics before this...) 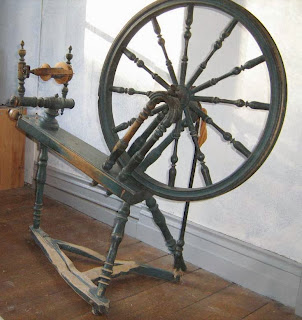 Here is the maker's mark: 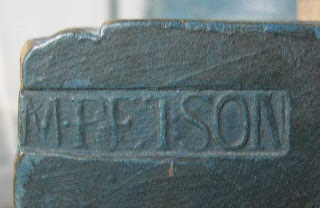 For the Swedes, it will now be obvious (I think) why he is called Findus. For all others: Findus is a cat who owns an old man called Pettson - many delightful (children's) books, issued by Opal bokförlag. (It seems some of them are translated to English. I highly recommend them to all cat lovers out there, no need to have children as an "excuse"...)

Since I love both Findus and his old man, and it did not work to link to "his" pages on Opal, I decided to help you non-Swedes with a link to amazon - here goes: http://www.amazon.com/s/ref=nb_sb_noss_2?url=search-alias%3Dstripbooks&field-keywords=Nordqvist%2C%20Sven

Posted by Kerstin på Spinnhuset at 13:47 No comments: