Regardless of the loom type(s) used – all fabrics must have a wefting order.
All the “recipes” have a tie-up given, so, obviously, they are meant for a treadle loom.

This is another of the handwritten drafts: 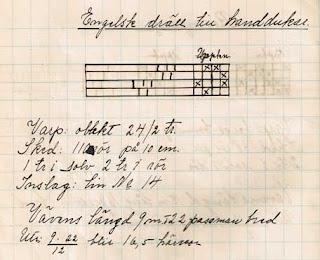 So – what happens if this gets treadled straight?
(I know which version I would prefer, anyway...)

So, again, I asked my guildmates. They were all, at first, convinced that “straight” is the way to go, if no order is given. Until... vivid discussion followed. After a while, the prevailing ideas were that, for 4-shaft threadings the treadlings were probably straight, but for more shafts, and/or “complicated” threadings tromp-as-writ was probably where to start.

But, again: this is now.

Earlier this year, I was looking into Hulda Peters Vävbok, printed in 1925 – a slim volume with 90 threadings/tie-ups, but nearly no treadlings. (That resulted in an article on my website – found here) Many of her treadlings were tromp-as-writ, or slightly modified, without mentioning that “little” fact.
It turns out that many (most?) old-ish “pattern books” that I have lack treadlings, but most “real” books (hardbound and more pages) include them.
Isn’t that odd?
Especially as the older (pre-1900) books I have usually have treadlings...
Posted by Kerstin på Spinnhuset at 12:57

I usually start with tromp as writ and then start playing but that's with the advantage of computers and dobby. A 16 shaft treadle loom might lend itself to something more 'straight forward' so to speak - in terms of production, anyway.

I guess there are a lot of possibilities and people have there own favorites. A good friend of mine and well educated in weaving always speaks about a "practical" tie up, that means a tie-up that suits for the following sequence of your feet. You start with one foot at the outermost left then the other foot at the outermost right, and you work yourself through the treadles inwards alternating the left and the right foot.
The reach that treadling sequence, the tie-up has to be changed to suit for it.

This is really interesting, Kerstin. I'd never heard of Tromp-as-writ, here in the UK when I learnt to weave in the late 60's. It wasn't until I discovered Margeretta Porter-Davidson's book (apologies if her name is spelt wrong, a friend is borrowing the book!), in the 80's, that I read about it. At lot of those weaves are quite old! Maybe she used Tromp-as-writ for want of any treadling plan?

I always start with a straight treadling and then anything goes!

I wish I had the time to have a go at your challenge, myself.

Alison, I'm glad it's not just us "dumb Swedes" who hadn't heard of tromp-as-writ...
Hmmm - come to think of it: maybe that is behind the North Am idea about crackle? That (forgot the name), who perhaps did not speak Swedish, found the jämtlandsdräll idea (with tie-up, of course), but did not understand the (for us) "obvious" way to treadle it, and so had to come up with the three-colour sequence and the tromp-as-writ treadling... which is unheard of here in Sweden.
Now I get other ideas...