Six selvedges, but how many layers? 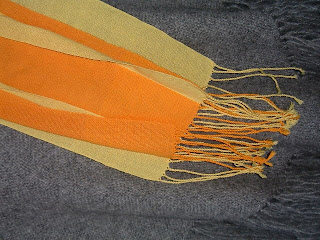 Some years ago I was a member of Complex weavers' double weave study group. The challenge was "3-D-construction".
So... my idea was to make a shawl: two layers, with the bottom layer forming "fins" coming up through the top layer. Like this:

After much tinkering, I had a draft. NOTE: the colours are there only to make it easier to "read" the structure. In the draft below, the bottom layer (yellow in reality) ha a brown warp, the "fins" have a red warp, and the upper layer (orange in reality) is purple. I gave the six yellow shuttle passes three different colours. (Click on picture to get a larger version)

It was time to weave - and IT WORKED!!
Below is the first yellow pass - from the right selvedge through the first fin: 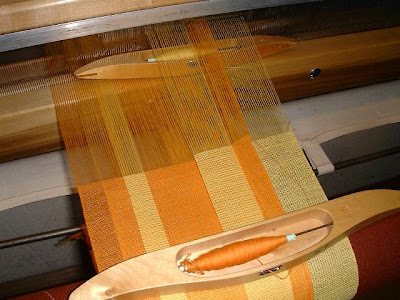 Below is the tird yellow pass - the first fin is done, now the shuttle goes in the lower layer through the second fin: 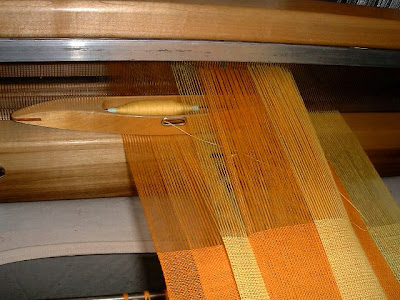 The first orange pass - from right to left, just a straight layer: 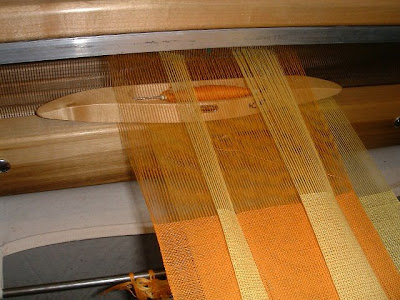 Unfortunately I hadn't really paid attention to the reverse side of the construction. Construction-wise, it looks kind of okay - but it is boring... a boring flat yellow layer.
This is (so far!) the only shawl I have made that has a very obvious "wrong" side...
Posted by Kerstin på Spinnhuset at 18:01