Shrinkage of cotton - mercerised vs un- 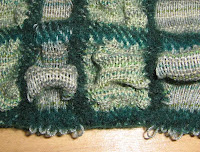 I have been doing a lot of differential-shrinkage shawls lately. They have all had a shrinking warp of wool, and a non-shrinking warp of cotton of different grists. Some warps have also contained up to about 30% singles linen.
Woven with non-mercerised cotton or singles linen they all turned out fine. Then I found this mercerised cotton, which had such a nice colour... and decided to use that, too. Of course I knew that merc cotton seldon shrinks, but I had thought it would be trapped in the shrinking warp. I was mistaken. The merc cotton all came out in little (or not so little) loops at the selvedges.

Conclusion: do not use merc cotton *if* you want shrunk edges...

Question: what would have happened if I had not placed a shrinking stripe at the edge? Would there be loops, if there had been weft stripes of this yarn and an ordinary un-mercerized yarn? Does the above phenomenon mean that one should never mix mercerized and un- in the weft?

You can see more differential-shrinkage shawls here.
Posted by Kerstin på Spinnhuset at 09:28