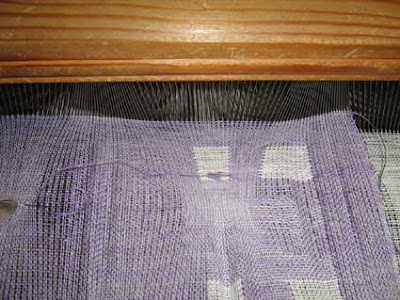 Some time later, I decided to try the fan reed on a Morse shawl warp.

I had a white cotton warp, on which I had woven some pastel-coloured shawls using linen singles for weft. So I re-sleyed to the fan reed, decided to stay with the linen weft.

As usual, I started with the bottom layer. All was ok.

Soon the web reached the breast beam. As usual with the fan reed, the cloth makes small folds where the wider parts (where the "fan" makes the web wider due to the more open dentage) have to be accomodated to the narrower parts.
Would that become a problem? 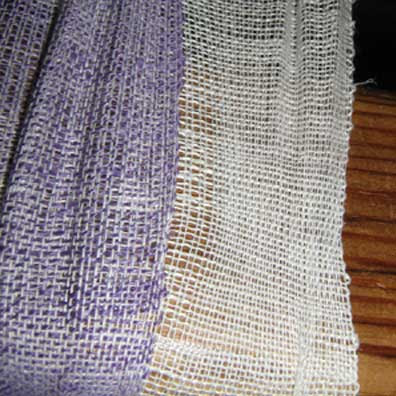 To make the message connected to the experiment, I had chosen "wriggling". And wriggle it did! To get the best wriggles, I found I had to move the reed every 10 picks (10 per layer, that is). I also found I had to advance the web at the same rate. So I wove 10 picks, advanced the web one or two "clicks", moved the reed, wove 10 picks...

The tension problems I had anticipated did not occur (or maybe I did not notice them - the fell looked all wriggly, too) 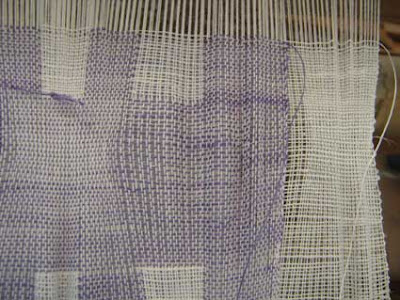 When it came off the loom it looked... like this. The bottom left selvedge wasn't a total disaster, but not very good either. Many folds, and sharp. Well, it was good enough to finish, anyway. 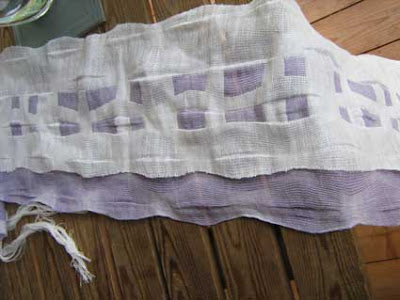 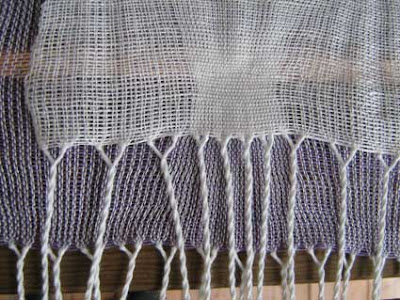 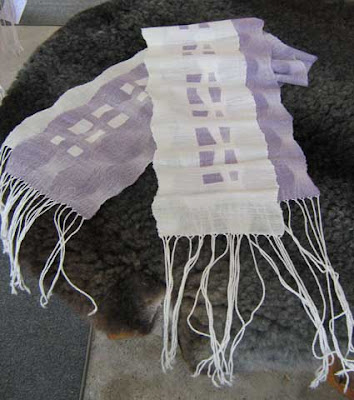 A detail of the bottom left selvedge (that was bottom left on the loom, that is!) - it could be better! 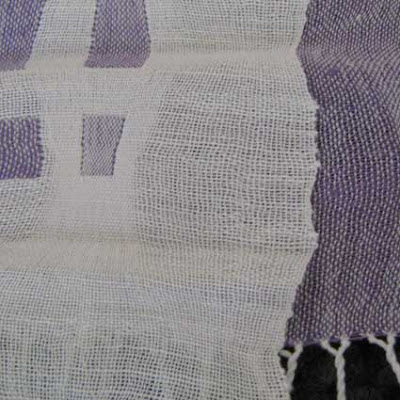 But... all of a sudden this occurred to me: it is always said, about knitted pieces in museums, that they have "evened out" by time. All knitted pieces look more than perfect - but "don't despair - they probably knitted with uneven tensio, too - it has evened out by time". And I have always been reassured by this - maybe my knitting will look perfect in a hundred years time, too.
And, as if this is not enough, myself, I have always said that minor unevenness in woven pieces will come out with successive launderings.
So what happens if I combine these thoughts with a fan-woven shawl in plain weave?
Will the wriggles still be there, in a hundred years? Or should it have been woven in a gauze structure, to better lock the warp/weft intersections?
Hmmm...
Does this mean I have to put this shawl in every wash I ever do for the next, what?, year, 5 years, 10 years to find out?

And - even more important: is it interesting enough to bother with? I can't decide...
Posted by Kerstin på Spinnhuset at 14:41

I think this is very cool - much the most interesting thing I've seen done with a fan reed. :D

Thankyou so much for this inspiring post. I was given a small fan reed 8 years ago and up till now haven't known how to weave with it.