...that the AVL was not quite as, er, "sturdy".
The Other Loom has perhaps 4 bolts, and they have to be taken out on only one occasion - when it is to be completely dissasembled.
I have woven on this loom for close to 30 years now, and have never had a problem with the reed falling out, for example. The breast and knee beams lift out easily, the beater lifts off... and no tools required. But it hasn't got a fly shuttle...

Today I shifted from the double fly shuttle box to the single - at least 6 bolts to take out, plus several other small screws and things that require tools. Then, of course, the bolts and screws have to go back in.
The beater top has two bolts, and to change the reed there are many more (9? 10?). To be able to thread at a reasonable rate, the breast beam had to come out - more bolts.

Don't get me wrong. Once "done", the AVL does nearly everything I ask of it - and with the fly shuttle and the auto-advance she is fast, too. 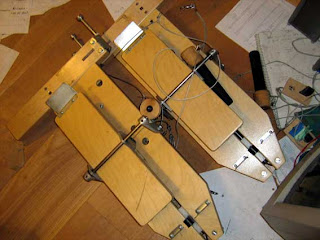 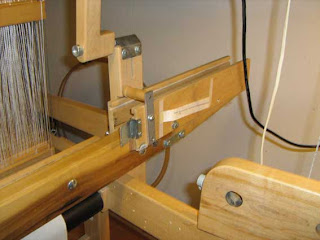 As I could not (easily) adapt this pattern to full inches, I spread the warp with empty sections between the stripes. By mistake, I started sleying "straight", which means the left side of the warp is about one inch wider on the beam. Had I started the sleying just half an inch to the left... but I decided it will not be a problem. Time will tell... 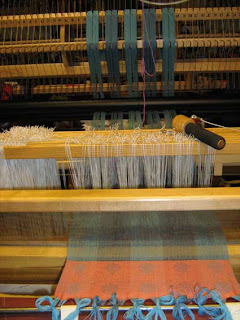 After having got the auto-advance set and the pattern/threading checked, I stopped for the day. 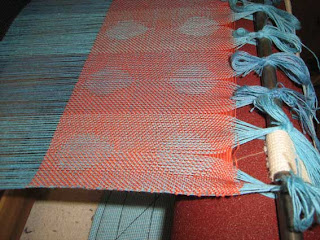 (no, I will use a somewhat less orange yarn tomorrow)

(I've better confess: it helps to have a club when taking out/putting in the wedges of The Other Loom. But a clog will do, in a pinch)
Posted by Kerstin på Spinnhuset at 23:29