So the next try was more... ordinary?
Straight pockets, plain weave between them, coins (but only at the ends). 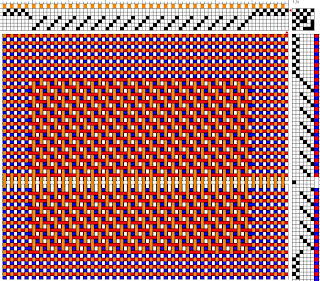 The coins give a nice weight to the ends, and also add glitter. They are almost impossible to photograph, at least the glitter :)
Some examples: 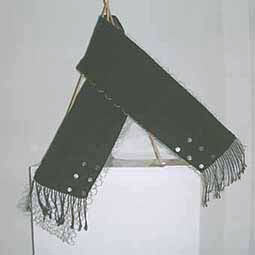 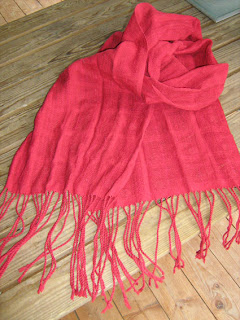 (Yes, there are coins in there) 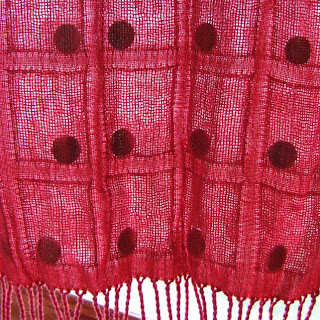 I have tried various "dragon scales" (fillings?), but coins still remain the best. I have tried sequins (for instance here), but they have no weight - and also do not like to be machine-washed, and can melt if pressed with a too hot iron.
I have tried finding mirrors, but can only find thick, single-sided and square. Had I found round mirrors I might have tried, but square with rather sharp edges seems to invite disaster.

I also tried stringing beads and let that pick "float" between layers, but did not like the results.

Another idea, still to be tested, is to have (coloured) warps floating between layers. Something like this: 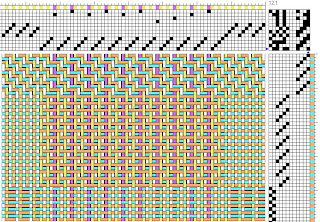 As you can see, I haven't thought enough on this... but I think that at least the cross-wise one-layer areas have to be twill. -There are several more variations outside what is pictured here, including point threading/treadling. And it still remains to decide what kind of yarn would look nice for the "floaters".
Posted by Kerstin på Spinnhuset at 16:09

I have woven double weave with ribbons in the pocket. One face was cotton and the other fine silk so that the ribbons would show through. It all worked and there of several variations on this technique scattered around. The ribbon is woven into the selvedge but hangs loose in the pockets
Can send a photo if you thought it would be useful.

How interesting! Another thing to add to my "to weave" list -- thanks!