How did we ever manage to experiment with strange ("new") structures before there was weaving software?
The answer (true for me, anyway) is: we didn't. Or, at least, I did not do it often – or, at even lesser (probably nor correct English, but you get my drift, I hope!) I did not often experiment with several layers.

This began with Maja, again. Her honeycomb isn't very interesting, except the quality: she used cotton 30/2 for warp anf weft, doubled for the outlines. (Ok, 30/2 doubled is double the thickness, but in most examples I've seen the difference has been a lot bigger than that.)

I have never woven honeycomb. One of the reasons is that I don't like structures with a so very obvious "wrong side". So I started to speculate... what if?
What if I tried to make a "back" – would I still get the weft distorsions?

This is the original draft 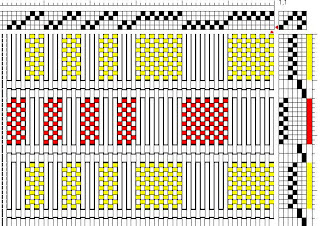 First, I tried with making the cell weft make cells on the back where it would have floated (back side to the left, right side to the right):

Only one cell weft, binding either on the right side or on the wrong. I decided I would have to use double outline picks (two each side), or the outlines would never distort. (As usual, the colours are there to make the draft more readable. You may not agree, but I find it easier, anyway.

Then I thougt that perhaps the non-floating weft would prevent the distorstions. New try: 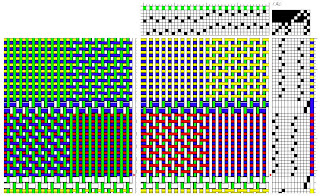 Here the cells occur at the same place in both layers. Both warps, and both wefts float at the same time. To make the layers connect, I used only one outline weft, picking up one end from each layer.

Dear readers, especially those of you who have woven this structure: what do you think of my chances? Will any of these drafts give me distorted weft (except the original)?

And what did they do for the selvages – were they just hemmed? As I have shafts available, I think I will try to get a small selvage. Maybe some basket weave?

Posted by Kerstin på Spinnhuset at 10:50

"futte" could be a misspelled Swe - futtig meaning "of no importance", which probably sums my idea up?

Well, I thought it sounded ruder than that. :) Will you have the sample ready for the trip?

I will not ask you how... but: obviously nothing beats being a "native speaker". It took me hours (until now, actually) to associate both (all three?) words to "futile".
I guess this is what a native speaker woulf call a "duh" moment...