The three-layer false doubleweave got another washing, this time with a gentler program (I did not want it to shrink further, I just wanted to get rid of the pressed look).

Of course I forgot to measure brfore, but it can't have shrunk much (I think). However, the pressed end still showed as flatter than the rest. I think the mangled end reverted to "almost untreated".
I let it dry out completely. It then had this, um, slightly hard hand that line-dried things can have.
So it got re-moistened (not much!), put in the mesh bag again and was sent into the dryer for 10 minutes (no heat, of course). I think it improved the hand some, and it got more difficult to recognize the pressed end..
I also retrieved the "failure", wet it through, let it become almost dry amd mangled it properly. It came out flatter than before (of course!), but not as flat as the pressed variant.
Gave both to several people for hadling, and again got most votes for the mangled.

- my problem is that I still like the look of the un-treated/tumbled so much better!

I also tried to fix a threading/treadling (for three layers) to make the right-hand edge easier to shuttle.

For the "summer skies" it was easy - I just put the outer band on it's own shafts, and added treadles as needed. (I wove it on the dobby, but think it is easier to see what happens if shown in treadle mode). 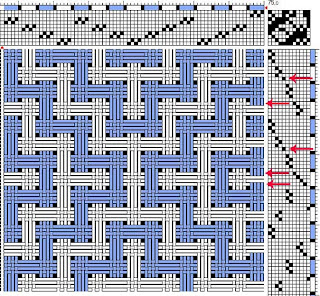 (I opted for the easiest lifting, which is why the white "back-and-forth" ends come out over the edge. After all, I had 24 ends/picks of the cotton, so it made quite a difference. What can I say - lazy?)

So I tried to do something similar to the three-layer one. But I only have 16 shafts, so I had to restrict myself to the two outermost bands. I could not find an easy way, but after a while I think I found a work-around. It has to be woven on the dobby, and would rely on a couple of "empty picks" to make me notice when the light blue should cross to the other side. 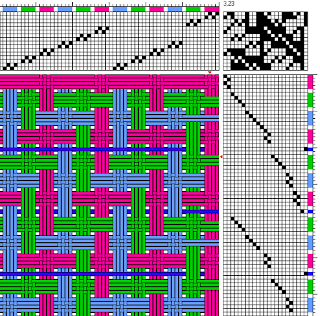 From the bottom up:
The blue comes out on top of the green (it should go over the red, too - for some reason I didn't see that before making a picture of it :-(
It comes out over the green, because the unwoven blue warp goes over the green.

The green comes in fron the bottom, goes out on top, because unwoven green goes over red.

Before the red picks, the blue should cross to the underside - the two outer bands go up, to make that easy.
Blue stays on the underside for the red band.

Before the red, the blue should come up - outer bands go down to make that easy.

Posted by Kerstin på Spinnhuset at 17:29

Interesting - I can only assume that the pressing has somehow 'set' the wool into place...

Seems like we both have been spending a lot of time at the computer to make our time at the loom 'easier'. :)
cheers,
Laura