(sounds like a variant of "how long is a string", doesn’t it?)

On yesterday’s sample, I did notice a difference between the width of the max top position and the max bottom position. For some reason, I did not draw any conclusions from it.

Today, when I had started the "real" piece (maybe to become the next sample, who knows?) I payed more attention. Noticed I could make another hole – not quite high enough, but better than nothing, perhaps?

Made the new hole. Yes, it made a difference: 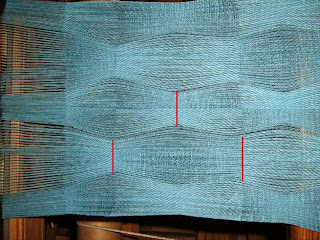 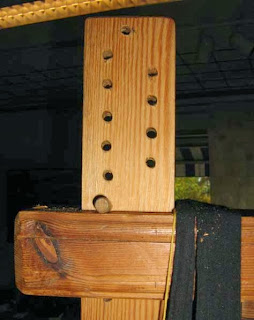 Weaving is slow. After every 8 picks, I have to stand up to shift the beater height - . At some 10 picks per cm it means I have to get to my feet more than 200 times for a scarf length.
"Excercise is good for you", right?
(and I already would like to re-thread, to see what happens if... there is a stripe in the middle of one section, or maybe an assymetric stripe, or... Maybe I could start with making stripes like that in the weft, instead?)

To answer Jean's question: I just use the outer holes, so I'm using 7 positions. As for the "good shed" - well, it isn't. I help it along by wiggling (if that is the word) the warp by hand for the extreme positions.
I know that there are special fan-reed beaters out there, but I haven't seen one other that on a line drawing (which also had a price on it - no way I was going to pay that much for something I almost had, anyway).
Some people use elastics (instead of a regular beater), but I don't think I could conscentrate enough to have control over my "positions".
Sara of Woolgatheres use texsolv cord - she has a video on how she does. You can find it here.
Posted by Kerstin på Spinnhuset at 17:08

Kirsten-
I assume you are familiar with the Danish weaver Karen Rios' work with the fan reed. On one of her old blog entries (12.4.10) she shows a photograph of a loom modification for raising and lowering the reed- it's a home made device that looks pretty simple to execute- That said, I haven't done it yet- I just repeg the beater like you do (except I don't standup to do it)

Yes, that is the thing I saw the drawing for. (Link to Rios' pos) She also writes, in essence, that you can use the holes in the beater instead. I saved my money -