On request from Meg I continued looking in the museum catalogue.
And I found two more "interesting" descriptions:

The [weaving] reed sits near the cloth beams [yes, plural - my note] in a weaving loom, directly in front of the shafts. It's function is to divide the threads.
The rectangular reeds consist of a wooden frame, into which thin blades of wood (in one instance metal) are mounted with a textile band.

Material: wood
Technique: carpentered [my dictionary says "carpenter" is a verb, so it must be correct...?]
Function: weaving

Shuttle. A cloth consists of two thread systems, warp and weft. The warp is tensioned during weaving and is crossed at right angles by the weft. With the help of the shuttle, the weft is inserted from side to side between the warp ends. The weft can go over and under the warp ends. With a treadle loom the lifting and lowering of the warp ends is done by the treadles. The shuttle is [quill-shaped?], with a hole in which a dowel is fixed. The weft is fastened around the dowel. One [of the shuttles] is patterned in two places.


In all fairness: at Murberget, they have elected to transcribe the text in the old paper catalogue. These two artefacts have no pictures, but in many instances they show the handwritten paper entry, often from the 1920-1940ies. Here is one example.
(I have often marvelled at what the museum generalists came up with a hundred years ago... but that is another story.)

So, Murberget uses the original texts/descriptions - most other museums do not. I remember looking in the Nordiska museets paper catalogue, and... let me say I can understand why they do not transcribe indiscriminately.

However, what is interesting about yesterday's post is that it is written after 1991. As I recall, there were several books about spinning and spinning wheels out by then, even written by Swedish authors... And even generalists should be able to read?

Now, to cheer us all up, a picture: 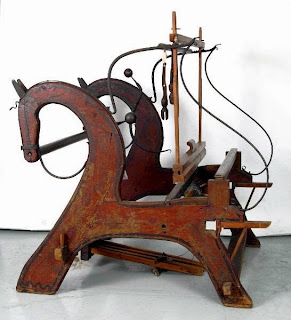 The picture comes from here.

Posted by Kerstin på Spinnhuset at 16:37

Oh, how charming! Wouldn't you love to weave on this every day? :D

Reminds me of the, um, rustic loom I saw in Finland, made from whole logs. With bends in appropriate places. But this loom is adorable.

Carpenter is a noun, the name of a profession. One who practices the craft of carpentry (fine woodwork) is a Carpenter. It falls within woodwork, along with joinery, which refers more to, say, putting up walls and things. I suppose a loom could be built by a joiner, but a shuttle would need a Carpenter. The loom you pictured would need the efforts of both, and an ironmonger by the looks of it too. Very cool loom

Though intriguing, the descriptions here aren't as far off as some I've seen, most often describing weaving tools as spinning tools, or in a couple of instances, "textile-related". Thanks for these. I'm happy to report my wefts aren't affixed to the dowel. :-)