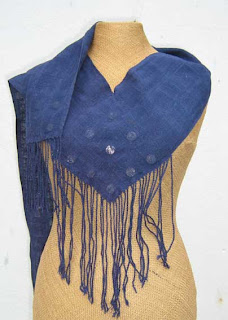 It has six coins at the beginning of the legs, and nine at the actual V.

As it happened, I had problems this time, too. Different problems - and of a nature that, again, the applying of brain (beforehand!) should have avoided them... (Question to self: will I now remember to concentrate on what I am doing?)

To begin with, it was smooth sailing.
Then...
I had attached the warp sections to the beam without first making a knot (in the warp). I have done this several times, and got away with it. (Is what I think now - then I thought "OK, now I see that it works without the extra knot".) So one section slipped out of the lark's head at the beam end...
I managed to fix that.
Wove on. Until... another section came loose. (I should have anticipated that, if I had Applied Brain - and fixed all sections at the same time.) 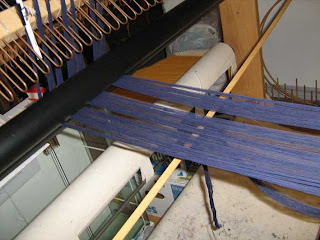 With much muttering and fiddling I took every section out of its "noose", put in the missing overhand knot, put them back in the nooses. (Yes, I also re-did the one fixed with a pen, in the top left in the picture above) The tension was, much to my surprise, almost ok. Only one of the sections needed special treatment. 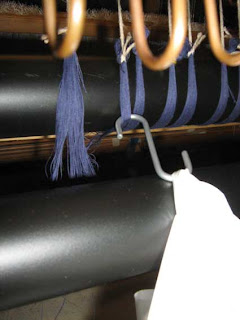 But I will remember to put knots at the end of the warp before beaming in the future... (I hope!)
Posted by Kerstin på Spinnhuset at 20:41