The making of a "design feature"

This time, things did not go as they should...

I knew the draft was correct, 'cos I had already used it. So, when it was time to start the join, I did not apply my brain... and started the join from the wrong side.
At first everything looked ok. When I was to insert the coin in the folded pocket, I noticed... nothing. When I was to insert the second "fold" coin, I did notice: the pocket was not open the whole way! When starting from the wrong side, what happened was that the pocket layers changed place at the fold.

Darn and drat! What to do?
Unpicking was out of the question - as, if for nothing else, nearly 2/3rds of the warps were cut off...

Hmm... How about making a "design feature"?
After the second pocket was done, I cut off.
Twisted fringes - very long fringes - I had a thought they might be useful...
After trying various arrangements, I settled for this one: 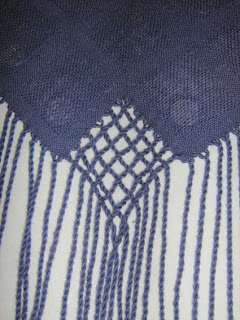 I "wove" the missing square with the fringes - and I am quite pleased with the result: 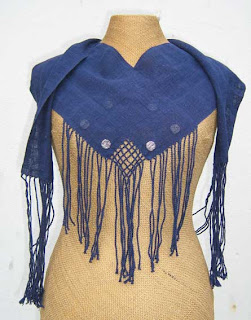 Posted by Kerstin på Spinnhuset at 20:34

Necessity is the mother of invention! And it looks great, too. :)

Now that is a happy accident! It looks lovely to me.

What a "lovely" mistake! I really like the scarf this way.