or: because I could

When the guild decided on "bags" as a theme, I was not very interested.

Some time later I found a box of un-interesting cotton that had been sitting around for a long time. I thought I could try another exercise in 3D weaving - a backpack woven in one piece.

Remembering the scarf with fins, I thought I would try to construct a backpack "with volume". Like this:

So the first thing to figure out was how to accomplish that. This is how:
(as usual, I use different colours for different layers, to make it easier to read the drawdown)

As I could not figure out a way to attach a flat bottom without sewing, I decided to start with a single layer, which included all warp ends. At the sides, there were to be four layers, so for the beginning of the bag I devised some kind of basket weave(s):

I warped with purple for the "whole" layers, and a lighter lilac in the pleats.
Started weaving - and it worked!
But... it was not very interesting. I did not like the yarn, I did not want a backpack... just wanted to see "if I could". As it would fit with the guild theme, I wove on.

Finally the bag part was "big enough".
I cut the "bag" warps of the outer layer, left the purple "pleat" warps. I also cut the lilac warps, and the bottom purple "pleat" warps.
This meant I could weave the flap as a continuation of the bottom layer, and the straps as a continuation of the outer (upper) layer. It would have been a good idea to use two more shafts, so that the straps had been on four separate shafts... which is why the flap-and-straps diagram below has 4 strap picks to 2 flap picks. (Yes, I tried to open the strap shed, using right shuttle, then left shuttle, beat and so on, but I liked that even less.)

And I wove. And wove. Until, when the straps were about half of what they should be, I cut off.
Threw the whole thing in a corner, tried to forget about it.
After all, I had accomplished what I wanted: to see if I could.

Half a year later, it is time for the guild exhibition, and I figured I could try to tidy it up... This is what it looks like: 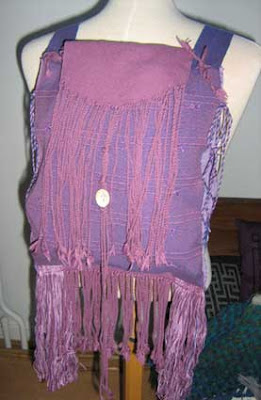 There are three knots in the "closing fringe", to accomodate for different amount of contents. 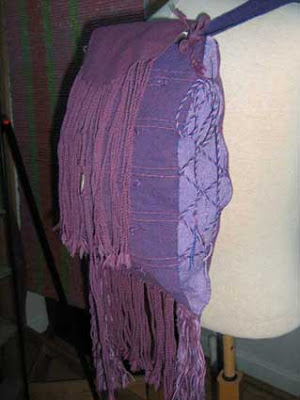 The guild exhibition opened on Saturday - pictures here (in Swedish) and here (in English)
Posted by Kerstin på Spinnhuset at 12:16

Fun! And it worked, which is even better. :D
Laura