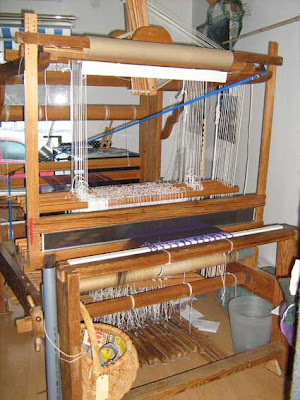 It is interesting how many ways there are to think about weaving on a shaft loom.
I am from Sweden, where we have woven on floor looms since... a loong time. Those looms were of the counterbalance type. In the late 1700s countermarche looms begun to appear. There is also the "middle" type - counterbalanced multishaft looms. The ordinary CB loom could easily be converted, one just added a multi-level pulley (drälltrissor, in Swedish) and some shaft bars.
Drawlooms existed, but were for "experts".
Above is a picture of my first loom. It is by now probably 100 years old. It is unusually deep, but otherwise typical. When I bought it, I got three generations (incarnations?) in one: there was one set of pulleys for 8 shafts and some horses, one set of dräll pulleys for 10 shafts and a countermarche.
Some sticks and things had been lost over the years, but I could set up a 20-treadle, 13-shaft CM loom without problems. It has got yet another incarnation from me - I replaced the tatty countermarche, and also got a double back beam. It now has 16 shafts and (the original) 20 treadles. 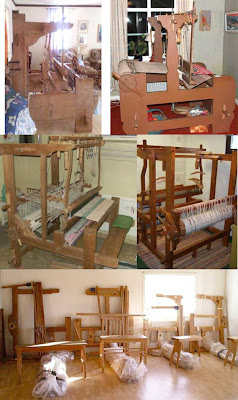 Above is a collage of pictures harvested today from one Swedish second-hand 'net site. All of these looms are old, some very old - and all are typical. (Click on the picture to enlarge)
In the peasant community spinning and weaving was concentrated to the winter season, so warping mills and looms were constructed to be easily dis/assembled.

Modern Swedish looms are still built in this pattern:

Above left is a Glimåkra standard, above right is an Öxabäck Cyrus.

From what I have read, all warping was done "back-to-front" - ie one wound a warp on a vertical warping mill, chained it off, and by the help of a reed or a raddle (and a friend/child/husband) wound the warp chain on to the warp beam. Then the warp loops were cut, the heddles threaded, the reed sleyed, the warp was tied to the front rod. The warp rods were attached to the beams with cords.

When the warp was in place, and under tension, the "upper tie-up" was done: the shafts were attached to the superstructure by the help of pulleys and horses, or the dräll pulleys, or the countermarche mechanism. After that, it was time for the "lower tie-up", or treadle tie-up. Both tie-ups were done every time, for every warp. When I went to weaving school we had to strip the loom(s) down to the bare frame when a warp was cut off - no shafts, lamms, treadles left in place. Why? - because this warp required 6 shafts/treadles, and the next might require a different number...

If the loom did not have lamms, there were several ways to facilitate tying several shafts to each treadle. The easies way was to put the treadle cords trough a ring of some sort (often, I have read, a piece of a cow's horn - but it could also be just a "ring" of yarn). Another way was to attach "shaft horses" under the bottom shaft bar. (This "shaft horse" is just an extra stick, giving better room to attach several cords to the bottom shaft bar. It also helps the geometry, some, by distributing the downward pull over a longer length.) I have never heard a Swedish weaver use an expression like "direct tie-up loom", even though I have known weavers who preferred to use both feet.
(For lots of interesting reading on traditional Swedish looms and weaving practices, see: Grenander-Nyberg: Lanthemmens vävstolar, ISBN 91-7108-076-7, printed 1974. The book has a summary in English.)

The first time I came to the US was for Convergence 1990. I saw so many ...things I could not properly relate to. I mean - I was a weaver of more than 10 years, I should know a loom when I saw one, right? And yet, here were all these small things: narrow, short (shallow?) and about knee high - surely they must be meant for children? Or do all Americans have extremely short legs? 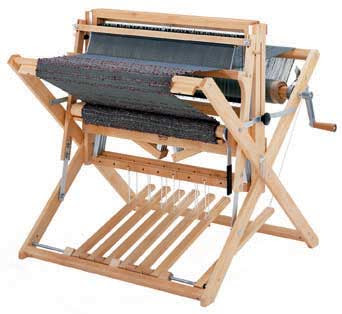 In 1996 I started to hang out on internet lists. There were so many discussion threads that I just could not understand. I understood the words, but they had some strange meaning: why would one need/want a "manual" for a loom, for example? By then, I had woven on, oh, I don't know, a dozen or so, looms. I could dis/assemble any one of them in less than an hour. They were all constructed to the same principle, even if some had the ratchet-and-pawl mechanism to the right, others to the left. Some had both warp and back beams, some had no back beam. Some had the treadles hinged at the front, most had not.
But a "manual"?
(Little did I know... some years later, I was thankful of the manual that came with the AVL, a loom that takes more than an hour to assemble - maybe even for a veteran.)

Another thing I could not understand was the idea of a "universal tie-up". It must be so much more efficient to do a tie-up that suited the project and its treadling order? And why on earth would one try to tie the treadles without a warp on the loom? Surely, it would have to be re-done, or at least adjusted, when the warp was in place, anyway?

Then there were the always reappearing discussions on warping - B2F, F2B. Huh? At long last I found out what F2B meant. To me, it sounded like a recipe for disaster: to cut and tie the loops before the warp was safely on the loom... surely that was asking for trouble? (I still haven't dared try that method, even though I have an idea that would depend on it... because I am not confident that I could tie the knots at the exact place.)

And the winding of a warp... Imagine - there are weavers out there that, apparently, never use more than one end at a time? And who are nervous about how to keep the warp order, if not using a one-by-one cross? When winding on a warping mill, I usually have 4 ends at a time - but it would not even occur to me to pick a thread-by-thread cross... and I have never had any problems. True, I have never made a warp longer than 26 meters this way.

Over time, I have learned to disregard some discussions, but now and again I can't help marveling at the fact that the seemingly "same" tools and procedures can be so different... and yet produce the same results.
Posted by Kerstin på Spinnhuset at 11:39

Yes, two of us took all afternoon to assemble an AVL.

Cultural differences are so tricky. As you say things look the same or similar, but perspective is from a different point of view. Learned that on my first trip to Sweden when I stayed on a U campus for 3 months immersed in Swedish culture. :}

I am one of these americans who has woven on a "toy" loom (mighty wolf) for 30 years. I have purchased an old Ulla Cyrus, and am crossing the cultural divide in the opposite direction. And wondering - why is there no manual for this loom?

I just set the CM mechanism on top of the loom this morning, and am a little terrified. But I think (hope) I will be able to logical it all out. Thank you for your amazing blog.

Leslie,
you ask "why no manual" -
(As I have no connexion with any loom manufacturer, the true answer is "I don't know", of course)
But my spontaneous thought is "why would any (Swede, I guess) need a manual - all looms are put together (almost) the same way".

So again, it must come down to culture.

Re tying up a CM: the most important rule is to have a tensioned warp on before trying out the tie-up: the warp is important for the balancing.
Then I have two personal principles: it is the *shed floor* that is important, not how it looks when no treadle is lowered, and: do not believe that the counting of holes is the ultimate answer. It certainly is a good place to start, but hardly ever (in my experience) the perfect place to find the perfect shed floor.

Good luck - with patience the first time, you will love your CM!

Thank you, Kerstin. I did put on a tensioned warp, followed all I read, and I can weave plain weave!

I did discover that the texolv heddles that came with my old loom are of two similar, but not exact length. And my upper and lower lamms tap each other a bit - so I need some additional work. But I am encouraged. Thank you so much for your excellent blog.

Talk about serendipity! I just came across this blog and this post when searching for something about why treadles might be hinged at the front or the back of the loom - but you have given me at least 3 ideas for my current project of adding another 4 harnesses to my loom!