Cultural differences: from the outside looking in

Late in 1998 (the 13th of December, in fact) I was approached by what was to become Växjö university. At the 1st of January 1999 they were to achieve university status, and they were to have the big inauguration at the beginning of February. They had decided that they wanted their very own academic dress for their professors. Was I interested in making them? I was.
So I went to town, to see their prototype. For various reasons, it was not useable as a model. So... was I interested in giving them a proposal? I was.
But.
What did I know about academic dress? Well - nothing at all. I knew that most Swedish universities did not use specific academic dress, apart from doctor's hats. I knew that there were "gowns" used in the UK, but had no idea what they looked like - except there was a lot of fabric, and weren't they black? Google? Yes (or was it Yahoo then?) - but there wasn't very much Out There 10 years ago. Library? Yes - but what to ask for? People? Yes - but where to find them? And it had to be done in six weeks...
I borrowed all books I could think of, I went to the cathedral to look at their wardrobe, I 'phoned several universtities, I found a couple of Brits. And I also had to take into consideration what the Växjö people wanted.
I came up with an idea, with no historical roots at all: 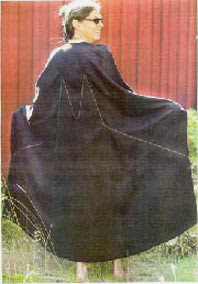 After some minor tweakings, the model was accepted, I found enough fabric (where do you buy 80 meters of fabric, any fabric, and have it delivered between christmas and new year?), made the gowns. 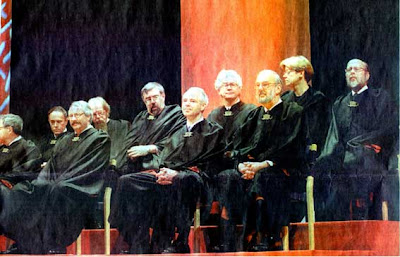 Several months later, I found a Yahoo list about academic dress. After a while, I dared participate on the list... The poor list members - they must have thought they had got an idiot (or at least a complete ignoramous who could barely read) among them. I had to learn a new vocabulary ("undress", anyone?), a new way of looking at pictures (the difference between a Burgon-style hood and a full-shaped one)...
In the year 2000, the Burgon Society was founded, and a year or two later I dared to join.
Now I am a fellow of the Society (and proud of it - thank you for having me!), have read a lot of literature about academic dress and its history. I know a lot more about the history and usage of distinctive dress for academics and clergy in Sweden, and I have designed gowns for a couple more universities in Sweden.
But.
Whenever I visit the Burgon Society's gatherings, I still feel an oaf... I recognise the words (well, many of them), but I'm not quite sure what they mean. I know a simple hood when I see one, but am unsure of how to distinguish a full hood from an Aberdeen style one...

I wonder which is the most interesting perspective: to be inside a culture, looking out, or the other way around? What I know is that there is a lot of head-shaking going on, whichever perspective you have... 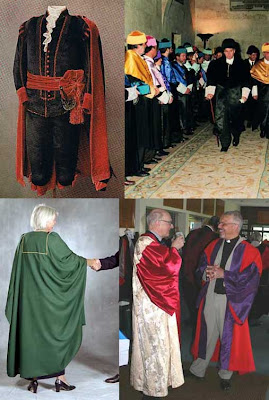 Examples from Sweden (old and new), Portugal and England.
Posted by Kerstin på Spinnhuset at 09:30

I think that's one reason I like reading Terry Pratchett - he turns accepted conventional 'wisom' on it's ear and makes you see things from a new perspective.

Congrats on the latest commission!

Just to say that I have enjoyed all your posts about cultural differences, and agree with many of your observations.