About 10 years ago, I acquired a computer-controlled dobby loom.
I had been using a multi-shaft loom for many years, so I could not imagine that designing for a dobby loom would be a problem - after all, a dobby was meant to make things easier, right? I had some weaving software I had used for years, and...

The first couple of warps were a piece of cake, as the saying goes. All problems I encountered could easily be called "user errors" - after all, the whole loom was new to me.

So. Time to be a little more adventurous. Something with blocks, perhaps?

I started with something familiar to me - a turned twill. I did realize the "problem" before I started to weave: for the first time in my weaving life I had to decide on the number of picks per block (and write them out, all of them), before weaving... Well - no problem, really: a two-block design, just weave a sample with the assumed number of picks per block, then, perhaps, tweak the charted design.

I have already described one of my first tries to weave summer-and-winter, here). While proving confusing, it was also reassuring: now I understood both about s&w AND how to handle dobby designs, right?

Right.
Next idea: now I could easily plan a whole long piece, borders and patterns and total length and... AND the sofa needed a cover... 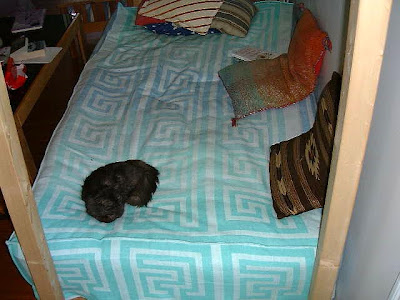 Starting the sampling was easy. I had a fair idea about sett and such - it was "just" the actual pick count to determine, and to convert that number into actual length (it had to fit the sofa), and to make the design AND the pick count AND the desired length to converge... Mere calculus, should be another piece of the proverbial cake, right?

Right.
It turned out that I wanted 6 pattern picks per each 4 pattern warp ends. This was not the standard number that the weaving software offered. As I thought ("knew") that I knew the ins and outs of the software, I "knew" that I had to fix that pick count manually... That was fun (NOT!). (Now I know better - nothing like starting to design for a dobby to make you understand about the "hidden" finesses in your weaving software! Mine has several...)

Well. The sofa cover came out OK - it fit the sofa, the mistakes are not too obvious, it still serves its purpose. AND it was (reasonably) easy to weave, compared to... for instance this: 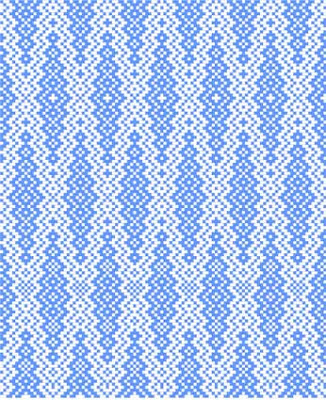 The real nightmare when using a dobby (compared to a "foot"-loom) is when something goes wrong. OK, it sounds easy enough: reverse the direction, and unweave "until done". Reverse direction again, and resume weaving. It is amazing, how easy it is to lose control when reversing...
Well. I think I'll leave it there.
The blue-and-white fabric made a jacket, mistakes and all: 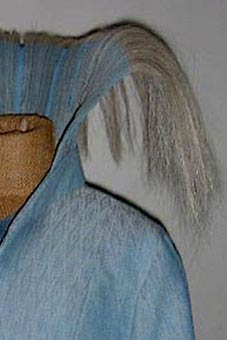 Posted by Kerstin på Spinnhuset at 15:44

The jacket fabric looks gorgeous - can we see a pic of the entire jacket? The collar looks interesting - horsehair weft, right?

Thank you! The jacket made it into Vävmagasinet last year (nr 4/09) - mostly because of the (elastic!) horsehair collar. I'm not a good photographer, but I'll see what I can do...