Meanwhile: while using the valet

For the first many years of my weaving life, I used warping sticks exactly as I was taught: for the first round, place the sticks so they nearly touch each other. * Proceed with making 3 turns, 4:th turn put warping sticks, but not quite as many. * Repeat from * to * until done.
I noticed that, for narrow warps, I had issues with the edge tension more often than not. When I analyzed the situation, I found the reason:
as the first part of the warp was beamed, with sticks, the sticks would bend slightly.

Here, I use three cords from warp beam to "apron bar". (Never use more fastenings than necessary, or the tie-on bars can warp!) 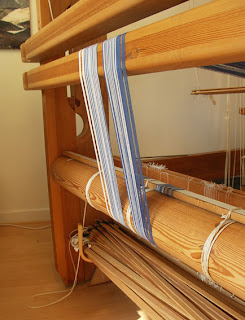 When I used warp sticks from the very beginning, they would look like this (exaggerated, of course):

The pressure/tension on the warp would cause the sticks to bend slightly - and that would often cause different tension on edges and middle.
So - nowadays, I divide the warp (to get away from the middle cord), and wind on enough that the warp is more even with the height of the beamed cords, as seen above.

When I think the surface is even, I introduce the warp sticks. (I would never beam a warp longer than 3-4 meters totally without sticks!) 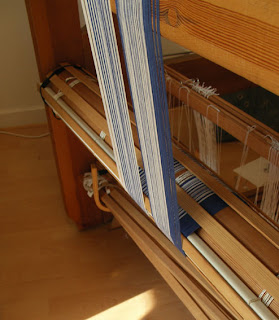 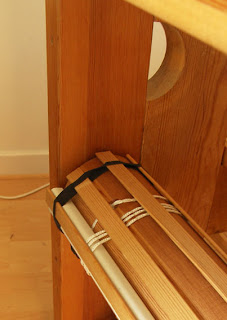 When weaving, I try to do "the same" on the cloth beam - ie no sticks until "level". This usually means I'm using (say) two pieces of heavy paper/cardboard plus one piece of lighter paper for the protection of the beginning of the cloth. When I think the cloth beam is about level, I put another "mat" of sticks - and that's it.


As you may remember, on this double warp I had two sets of lease sticks , each suspended from it's own "hanger".
The warps were offset a bit, and the blue warp (or, at least, the lease of the blue warp) is under the white.
Now, when threading (from the right), obviously I start with the white warp - there is a single layer of white to the right. I pick the white end "randomly" from the 4-end cross. (Quotation marks, because I try to get them in order - if I see a twist, I try to avoid it.)
When I start threading the double layers, I pick one end from each cross, threading end-on-end. I have never had any problem from the fact that the crosses do not correspond - . (And yes, I leave the lease sticks in, still in their holders - but I make sure they are well back towards the back beam.)

Sorry, no pictures from the threading - but here is an article about how to derive a double-layer weave where the layers change places.
Posted by Kerstin på Spinnhuset at 18:16

Thanks for the wonderful explaination of how you warp. It's very different from my method so I'm very interested to follow the rest of your process.

I've found exactly the same problem when using the warping sticks provided with my Megado - the edge threads drop away from the main body of the warp (if that makes sense). You don't necessarily notice this until you're weaving away and find your selvedges are slowly becoming tighter and then tension becomes a problem in the main body of the weave with loose threads and difficulty getting a good shed. I now get round this by going back to using paper. For some reason I don't have this problem with paper.