At the beginning of the new year, it is time to study the statistics from the old.

But first a short story:
in the middle of the autumn, I went to a weavers' meeting. There, we were, among other things, introduced to a New Important Project: a national crafts assoc has decided to promote handweaving.
They had several reasons for this - the first mentioned was that there is nothing about weaving to be found on the 'net ("If you search for weaving, you get no hits").
Another reason mentioned was that there are no weavers in Sweden anymore, and, after all, Sweden was once famous for its weaving and weavers.
Also several techniques (among them trensaflossa) were "dead", and needed published instructions.
So, the proposed main goal of this New Project was (among other, smaller, goals) was to create a 'net portal to contain "everything" about handweaving - .

At that very moment I searched (Google) for "vävning", with no qualifications, and got about 63000 hits. Among the first 50 hits about 4 were about other things than loom weaving (weaving intrigues, weaving horses, which probably is called something else in English, and two hits for dictionaries).
"Handvävning" only yielded about 1600 hits, of which about 30 of the first 50 were about weaving, the other 20 were from yarn sellers.
As it happened, my guild had had a program about trensaflossa just a week earlier - and, lo and behold, our page about trensaflossa was already to be found - on 3.rd place among about 850 hits. (Ok - our page wasn't there when she prepared her talk...)

Now I have been looking at 'net statistics from 2010.
I have my own web page, but I am also responsible for my guild's page.
Vi KronobergsVävare has had web presence since late 2003. We have accumulated about 100 different pages, of which maybe 10 has a content other than weaving (a few annual meetings and so on), but I really try to make sure that there is some weaving content on every page. We have an index page (in English - for Swedish, go "home" and choose "register") which lists content sorted into weave techniques, material, dyeing, ergonomics, theory, ideas, guild projects and exhibitions, curiosities. (Granted, some of the pages/meetings fall under more than one category.)
We also have a fairly large links page, linking to many "foreign" organisations.
A number of our pages are also translated to English.

So, what did I find in the statistics?
We had 2300 Swedish visitors, 470 from the US, 380 from the rest of the world, making up a total of about 3150 visitors. That makes an average of between 8 and 9 visitors per day. Those visitors viewed a total of 13150 pages, which gives an average of 4 pages per visit.
We had a total of 100 (clicked) outgoing links (I have no idea of how many links there are on the whole site), of which only 35 had more than 10 clicks. 35 had less than 5 clicks - of which 18 were to foreign organisations/resources (such as Weavolution, Complex Weavers, HGA, GCW, Atasda, Italian and French sites... AND handweaving.net). (No, no links here. You are all invited to use our links page, to better the statistics for next year... ;-)

What can I conclude from that?

Combining the "information" from the Project Person above with the fact that only 1/3 of our links have been popular, perhaps I can say that Swedish weavers don't care about a) information available on the 'net and b) weaving in other countries.
(Yes, I know: English is a foreign language to us, and the study of English hasn't been mandatory in Swedish schools for more than about 50 years...)


Combining the above with the fact that my own site has had 3600 Swedish visitors and almost the same number from the "rest of the world" - well... that was the reason why I decided to write my blog in English. And, in fact - this blog has had more than twice the numbers of visits from the US (only) than from Sweden (1550 and 650, respectively).

So, again: who is interested? And of what?
... looking at keyword statistics for the guild site, the vast majority is after free weaving patterns/instructions.
Most just search for vävmönster, vävnotor (patterns, drafts) but several add "gratis" (free of charge).


There has been several discussions here in Sweden over the last couple of years about the "fact" that there is no handweaving information to be had on the 'net. And that that is especially unfortunate, as all "youngsters" are supposed to search facts on the 'net only (supposedly they can't read books?). Said youngsters have complained that us "oldsters" (if it isn't a word, then it ought to be!) do hoard our information/knowledge, and besides, we only weave boring things like tablecloths.
What I'm wondering is: HOW can us oldsters "share" - if a) books are "out" and b) the 'net is "out", too?

To add some weaving to this (over)long post, here is a boring old thing (sunscreen?), woven on a boring old countermarche, using 4 shafts (but could have been only two...): 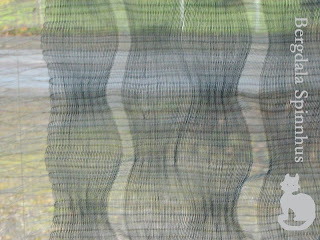 Mercerized cotton 50/3 and fishing line for warp, white horeshair for weft; tabby, but woven with a fan reed (sorry, I won't disclose the sett :-) - there is a limit to what I want to share...)
And: no, on account of the fishing line, it could never be used as a tablecloth.
Posted by Kerstin på Spinnhuset at 19:59

You are right, Kerstin. There is a curious disconnect between the information that's actually out there and the people who are supposedly using or researching it! Like you, the majority of my readers come from the US. Yet Vav magasinet is popular in the UK and US also Swedish weaving is seen and appreciated, especially the versatility of Swedish weavers, and other Scandinavian weavers! It seems to us that weaving is very much alive and kicking in the Nordic countries! And contemporary!!
Stacey Harvey-Brown
www.theloomroom.co.uk

"And contemporary", you said - not sure what this means in connection to weaving, but comparing what we (both me and guild) do to the young'uns ideas about 1) rag rugs, 2) table runners, 3) tablecoths - on my site there is nothing of that, on the guild site we have several rag rugs, but no runners...
And yes, weaving is certainly alive - if we don't count the possibilities to get higher education...