When I first learned to weave, there was one method (and one only) to get the warp onto the loom (onto the warp beam, that is): using helpers.
Here is an illustration from my Cyrus (Manual of Swedish handweaving) - mine is printed in 1980, but I'd say the picture is a little older... 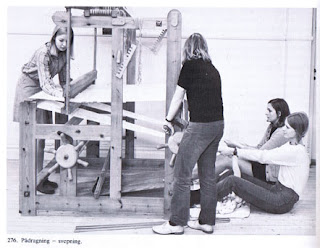 As you can see, it takes 4 persons to get a medium-width warp beamed - 3 if it is narrow, and more if it is wider.

This method has historic roots. It is described in many books (among them Grenander-Nyberg, Lanthemmens vävstolar). - often it it said that there were just a few "experts" in every village, to be called on every time one wanted to start a new warp. Most older descriptions tell about how "everybody" came together to help "setting up the loom" - it took several helpers to get the warp beamed, it took two to thread/sley. (There were also several "magic sayings" - should one accidentally come upon a "setting up the loom", any part of it, one should hurry to take a few very high steps, saying "SO high shed, SO high shed", for instance. From Tillhagen, Vävskrock.)

Some years later the guild was collecting tips-and-tricks - and it turned out that more-or-less everybody had their own specials for beaming without help. (One of my favourites was to stretch the warp in front of the loom and place a vacuum on top of it...)

Then came the commercially produced "pådragningsknekt" - literally "valet (helper) for winding on". It is produced for sale by AK:s snickeri, and looks like this: 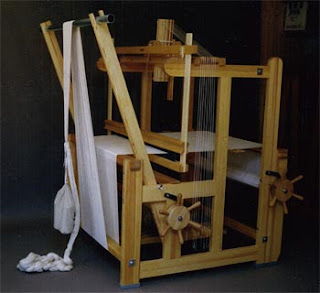 They recommned stretching the warp from the beam, through the reed (rough-sleyed; raddles are all but unknown in Sweden), over the breast beam, under the foot-rest, up over the valet and down to the floor again. Weights are attached and let ride up to the top of of the valet, then lowered.

I decided to make my own - after all, the commercial product consists of three pieces... Mine is made from 2 pieces of 2-by-2 (inches), approx 2 meters high. There is a hole near the top, where I insert two pieces of steel rod. Between them I hang a sturdy aluminium tube.
The lumbers are placed inside the loom frame; one rod is inserted; tube is held in place and the second rod is inserted. Took about 15 minutes to build (including fetching the drill); takes about 3 minutes to put in place... 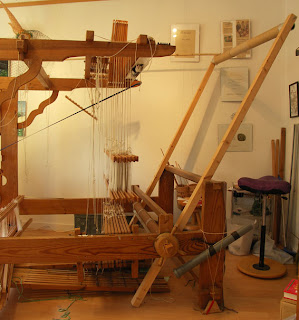 As my loom is not as "nice" (I mean smooth), I have modified the warp route - I let the warp go under the breast beam and directly up and over the valet. 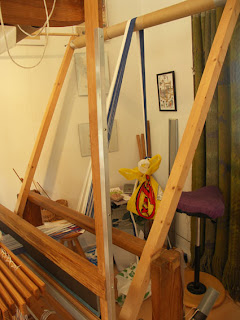 For the last bit of warp, I re-route the warp to go over the breast beam instead. Takes many moves of the weight for the last meter! 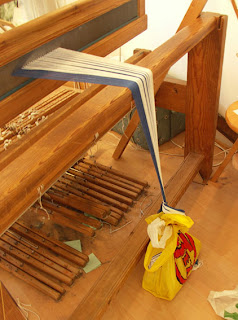 For weight, I use bricks in (as you can see...) ordinary plastic bags.

The advantage of this kind of easily disassembled warping valet is that it is portable, flexible... I can even use it for the AVL, if I want to. In that case, I lean the lumbers out over the track (or what's it called, where the tension box rides?). I tie the (rough-sleyed) reed to that same track. The beaming has to be done with more care
(ie more slowly), because the reed is not as stable as when it sits in the beater - but it works.

Perhaps I should warn you: aluminium will stain fabric. I've put paper on my tube, which also has another life: it acts as strengthening for the (too weak) knee beam.
Posted by Kerstin på Spinnhuset at 13:53

I am so glad you took me to the vavstuga where I first saw the valet. It's been a god-send and I love this system of beaming a warp!

That's really interesting and I must look at my looms to see if I can incorporate it. I can manage the two smaller looms but the Megado is a bit of a problem if I am not using the sectional warp beam. At the moment, a Megado warp goes through the raddle which is on top of the castle and then under the top of the castle (above the shafts) so that I can hold it tightly with one hand while winding the warp on. But There are problems doing the last yard or so!!

The beauty of this construction is that there is no need to clamp it down - and that it disassembles into 3 pcs that can be put in the corner.
It should be adaptable to all looms with some weight to them, I think.

I noticed you have the warp going under the cloth beam and no warp extensions. If you follow the same path as in the picture you posted, and use warp extensions, you can use the trapeze all the way until the warp reaches the length you want it to be.

Yes, I had extenders. When one broke, I never got around to make a new one... ordinary carpet warp will not survive long with the weight of four bricks!

you have either simalar tricks as me do use.. it`s funny all over the world thesame problems..

sorry, my english is not so good..
best wishes wiebke