Evelyn posted a question over at Weavolution. She asked how to treadle pattern no 44 (Hålkrus) in Vävbok by Hulda Peters.

The book in question is but one of many - in the early 1900s there were several small books containing "simple" (or perhaps "traditional"?) weaving patterns. They were often thin pamphlets (the Peters book is, in fact, unusually thick - all of 96 pages), often claiming they are describing "local" weaves.
This, I suspect, was the time when Daldräll ("overshot") was associated with Dalarna, when Jämtlandsdräll became "typical" of Jämtland, when Gagnefkrus was attributed to Gagnef, Östgötadräll to Östergötland, Rovadräll to Rova... and Smålandsväv to Småland.

Peters is, at the time, manager of the local Craft society shop in Skara. She is quite unique in that not one of her threadings has a geographical name.
She is also unique in that she does not give any treadlings... The detailed threadings are there, the tie-ups are there, and occasionally she gives some off-hand treadling instruction ("treadled back-and-forth").

The hålkrus, #44, has the threding and the tie-up. It also has a picture - (click to biggify):

As hålkrus usually has well-defined "holes", it is easy to doubt the name. Or, at least, to be confused... 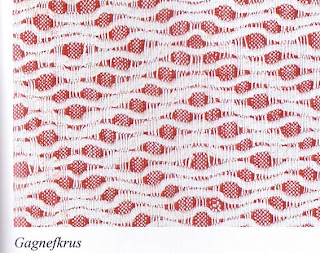 As I don't like to be confused, I did some research. It resulted in a new article on my web site - read it here.

I also wanted to know what you called it in English, I tried googling.
At handweaving.net I found an excerpt from Master weaver from 1954, titled "Hålkrus, or Gagnefkrus, or Spetsväv, or Lacey Weave, or Honeycomb". It says: " Strangely enough this weave with so many names, has none in English. In colonial times it has been called Honey Comb. Since then however the industrial weaving adopted Honeycomb as a synonym of Waffle. So if we want to call Hålkrus by the name of honeycomb, we must add Colonial, or nobody will know what we are talking about."
So, I googled honeycomb +weave - and, sure enough - most hits I got depicted what I would call waffle - this (scroll down a bit), and this - in fact, there are several waffles on this site, all labelled honeycomb.

(Please, can I have all possible names for the technique? Don't mind the language!)
Posted by Kerstin på Spinnhuset at 17:00

Very interesting to read your article and see the way you approached the investigation. Not simple, but logical steps and making use of resources.
Judy

Well - "reverse engineering" (in this case going from detail to profile) can be more or less straightforward. The examples I picked were not very complicated - but don't try a jämtlandsdräll (crackle) unless you have lots of time and a good supply of patience!

Hi Kerstin
Thanks for the comments on my blog.

I call this weave Honeycomb and first found it in the late 60's when at school.