In case you wondered:

I am not a collector.
The fact that I own 6 electric sewing machines, 4 treadle machines, one hand-cranked and 3 sergers does not mean I am a collector.

The other day I met with the glass-industry study group (don't ask - or, take a look at the glass portion of my other blog) we came to discuss collecting. They declared themselves to be collectors (of glass, mostly), and offered me a definition: a collector has no interest in if the thing (maybe I should say artefact) "works" - if only it looks "good".
And more: a true collector would never use the thing (artefact) - if s/he has paid good money for a (say) glass vase designed by (say) Gate, s/he would perhaps put it on a shelf somewhere, but would never even dream of using it to put flowers in. (Knowing some of the self-proclaimed collectors a bit better, I would suspect
the artefact would be placed in a box somewhere, the new owner hoping it could one day be sold - an investment, in fact.)

The idea of restoring an artefact is unthinkable, I was told.

So - I am not a collector.
Well - maybe this one is more for looks than for (even potential) use: 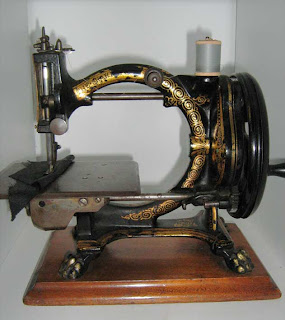 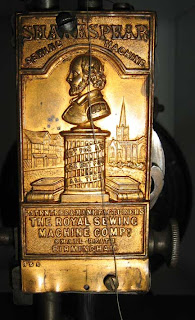 He is, as you can see, called Shakespear and was born in Birmingham. The manual that came with him is dated 1865 - but, according to this site that can't be true. I bought him for his looks - but: he sews! He is a chain-stitch machine, and it is awkward to have to dedicate one hand to the cranking.

My mother gave me my first sewing machine when she got a newer Adler. This is a Singer, and she got it from her mother as a treadle machine. Mother invested in an upgrade, and he has been motorized in all my life. He still sews beautifully, and I use him for "important" edgestitching. Unfortunately, the treadle is unconfortable if used for any length of time. At the moment, he sits on a shelf. 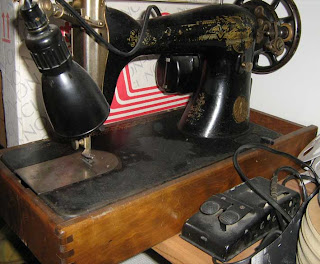 Later, I bought a Husqvarna (in 1972, if memory serves). She served me faithfully until last year - and I will probably have her repaired. (Why? because I'm an idiot - and found a new Elna for approx the same price as the repair would have cost. I suppose it works - but there are no feet for it. AND the "standard" feet that I have been able to mount on ALL the other machines don't fit. Sigh.)
When I started to sew professionally, I bought Princess Pfaff, but I also needed other machines - topstitching in grey, green and yellow took way to long if I had to re-thread for each gown. I had the Singer and the Husqvarna, but I also retrieved the old Adler...

In the meantime, as I had space, I found an old treadle machine - a Husqvarna Triumf - a machine with a shuttle (instead of a bobbin). After some, er, fiddling, he sews. The shuttle looks almost exactly as does a fly-shuttle for weaving - the problem was to figure out how to load the bobbin.
I know the Triumf was maufactured in 1889, but haven't found out for how long.
I especially like the plate with the recommendations of which thread to use with which needle! 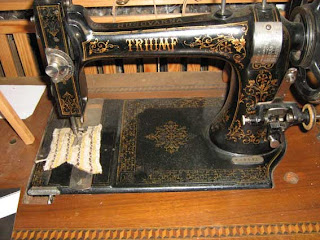 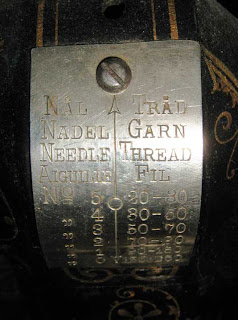 Then came the Sackmann's Victoria - I couldn't resist her, with all the mother-of-pearl inlays!
She also has a shuttle, but it operates sideways. Her needle/thread recommendation plate photographed better, as it is flat. (And I wish there was a better choice of sewing threads nowadays!) 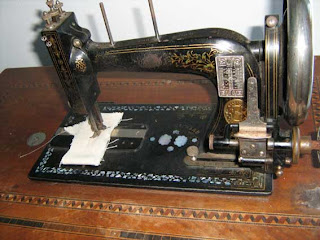 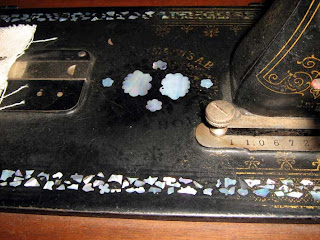 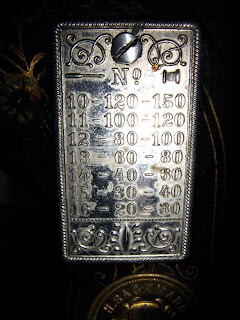 She also has another detail - a small grindstone to sharpen the needles! (It took a long time of gentle oiling to make it turn - but now it does.) 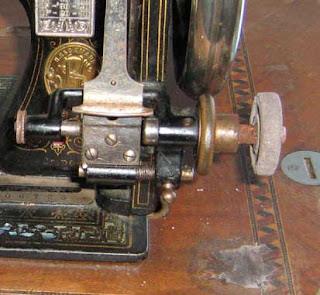 Some 'net-search results indicate that this was manufactured by Singer - but the picture on this site shows an inlay much like my Victoria's - and says she comes from Germany.

For some time I also had a Singer 29K70, like this, bought from the estate of a shoemaker. The most interesting feature of that is that the whole needle bar (or maybe just the foot) could be rotated - you could sew "forwards" and have the piece going "backwards". In my house, it was only used once - we repaired a sail with it. And one day, I had a customer who "gave me an offer I couldn't refuse", so it is now gone. Hopefully to a good home.

Anyway. As I am no collector, I can disregard everything, and just enjoy all my sewing machines - even USE them!

- There are other things I also don't collect - like encyclopedias. For readers of Swedish, the pages Kuriosa on my website have some thoughts on the use of encyclopedias through time...
Posted by Kerstin på Spinnhuset at 12:33

I just rescued a Sackmann Victoria B from an old lady's storage in Gothenburg and have been trying to find more information about it. Have you had any success?

The most I've been able to find is this ad from 1891 for "Singer Victoria" machines from Sackmann and the manual at the royal library in Stockholm. I'm going to be in Stockholm in a couple of weeks and will see if I can make a copy of it.

The confusing thing is that online I can't find any reference to a "Singer Victoria," and if it is a badged machine it doesn't look exactly like any other Singer model from the late 1800s. The closest I can find is the 12K, but it doesn't have that front needle–thread info plate that opens up to show the gear inside the arm.

Could it be a Singer replica, and the Sackmann ad called it a Singer to attract sales?

I don't know if you're as curious as I am, but this is a mystery to me.

Well - that's about as far as I got, too.
As I'm not a "true" collector, I'm just mildly curious :-) Should you find anything very special at KB, it would be nice if you told me.

Give her a pat from her old sister, and happy hunting at KB!

The link didn't work in that last comment… But here's the manual to the Victoria, courtesy of the Royal Library, på Svenska förstås.

I have a Husqvarna Triumph as well, but its missing it's shuttle and the manual. I haven't been able to find it... can you help me?

I don't have any extra shuttles, but I do have a manual (in Swedish).
If you want a .pdf, send me your e-mail address - kerstin (at) bergdalaspinnhus (dot) com