Let there be light!

For the longest time I have wondered why light reflectors aren’t incorporated into winter clothing. I have sewn on bands of reflecting material, I have embroidered with reflecting thread. I have experimented with needle weaving reflecting thread into existing garments – here I am, on a winter’s night, on the road outside my home (click to enlarge): 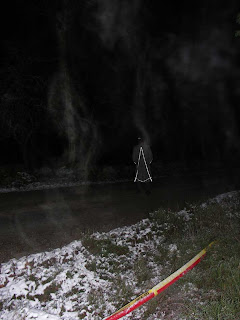 I have also experimented with using that “yarn” (really a narrow strip of PVC plastic, coated with reflecting material) to weave with – pictures without and with flash (pictures taken at the same time): 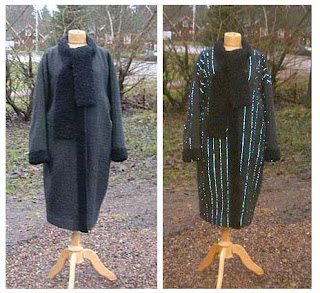 Before the yardage was made into coats, it was in a yardage exhibition at Convergence – it must have been ’04, I think. It was titled “nightly rainbow”. Here is a detail – top is the reverse (no flash), bottom the right side (flash), both on loom: 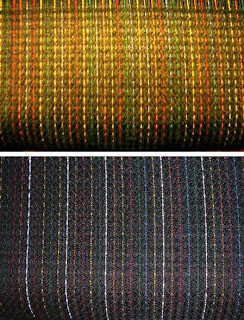 Basically, it is a waffle weave with the coloured and the reflecting ends placed so as to be on the reverse side most of the time. 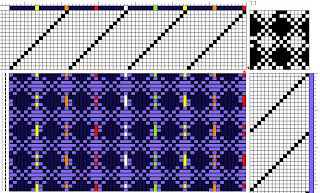 Now, I have just completed another reflecting experiment. This time I used a reflecting thread made to use for machine embroidery. I chose that to see what hand the fabric would have if it was used throughout (together with a woolen warp and weft).
First I tried it just “doubled”, but didn’t like the result. 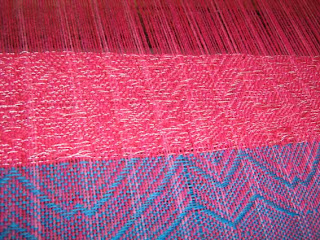 So... the next step doesn’t really lend itself to “production”: I tried plying it with the weft yarn. Of course (I knew it, but hoped I was wrong) the weft yarn became totally unruly... which meant I had to first unply, then re-ply the weft yarn. It worked, but for production? No...! Maybe I can talk some small spinning mill into making it for me? 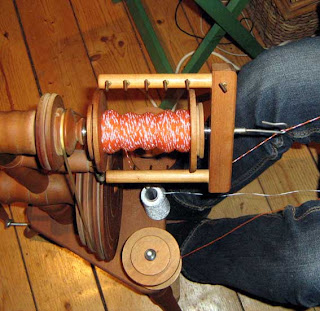 However, with a coat/jacket like this, one would not have to worry about being invisible! 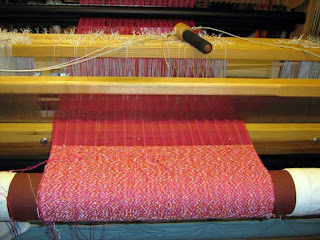 (Yes, it has been wet finished, and it handles quite ok. But it will take long before I will try to make a longer yardage)
Posted by Kerstin på Spinnhuset at 17:34

With long winter nights coming this sort of fabric is fabulous. Will be interested to see what you make with the fabric.
cheers,
Laura

well, this is (hopefully) just the beginning... there is a Project in the making. (Or not, as the EU's ways are mysterious, like the proverbial... well, you know!)

- at least I have several dog-walkers interested in something like this (dogwalkers are great, even if I *was* thinking of opera-goers) - if only I can match their, what's-it-called, price-...range?

I'm watching with interest! I have just been given some reflective yarn and I want to try and incorporate it into something to wear on dark winter mornings. Still thinking about what exactly that should be...

I have been running in the dark with some form of reflective gear for years! I remember a phase where running clothes were printed with reflective designs! Kinda fun and practical. Neat concept to play with, similar to the led lighting being integrated into clothing and also solar power into clothing.

Dawn, I *wish* I could find some reflective ...something - dye? paint? - have been searching for that for years! Printing (or painting) would be so much easier than embroidering, esp for one embroidery-hater like me...