Over at Weavolution there has been a fun event going for the month of October.

I “signed up” for a dare: to try the seersucker method that Cathie posted some time ago.

I had lots of other things to do, but, at the last moment, I managed to get it done!

On the Friday I dressed the loom. 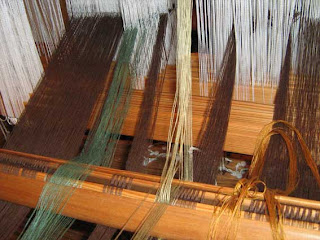 On the Saturday I wove it (and fringed it) 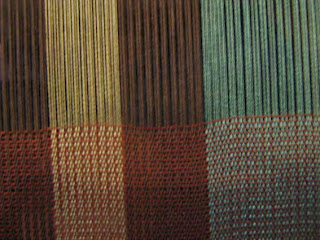 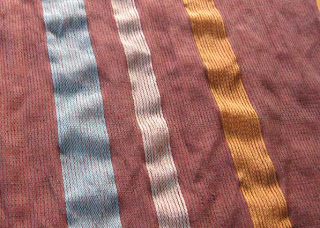 (which, considering what I also did yesterday, was a bit of a feat)

and today, after wet finishing, tumbling and some press it looks like this: 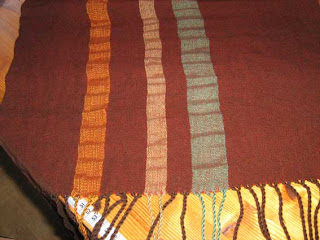 As the method called for the main warp to be tight, the “seering” (or is that the “sucking” ;-) ?) warp(s) to have a lighter tension, I decided to do 3 stripes, and to tension them differently. As I got confused with the math, I ended up with approx the same tension (weight/end) for the green and the taupe stripes, less for the gold stripe.
I cranked up the tension on the brown warp as high as I could.
(All warps are cotton – the brown is 16/2 unmerc, the coloured is 20/2 merc. All are set at 12 ends per centimeter. The weft is an unmerc cotton 16/2, and the whole thing is slightly warp-emphasis - I think I had approx 8 picks/cm)

Just for the threading, I had wound the stripes on the second beam, meaning to take them all off later, to hang freely. Then it dawned on me: I could let them form loops at the back, hang the weights in the loops – it would make advancing the warp easier, too! 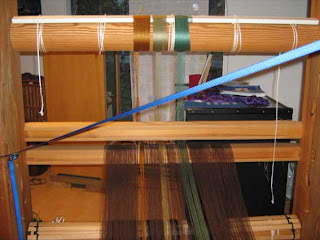 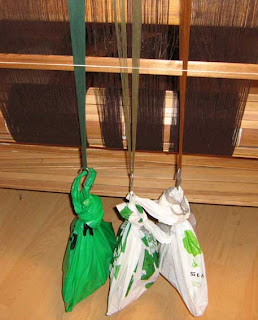 To begin with, I had too little weight on the stripes – after several skips I added to all three! 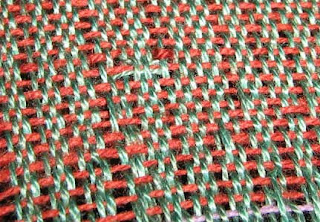 When weaving, the different tension did show up only when I advanced the warp. When cut off, there was just a hint of “something” in the stripes (see picture above).
So: my hope was the wet finishing would take care of the sucking... and it did. Some. 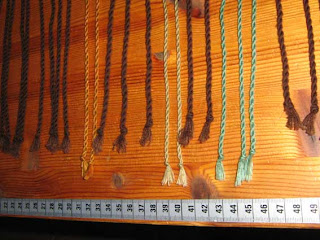 Try as I might, I can't get a good photo of the shawl (or "not-quite-rebozo") draped, the colours don't want to cooperate. But there are tendencies towards iridescence in both stripes and main part - maybe another day.

But there is some warp left over, maybe I should try with twill in the brown parts...
Posted by Kerstin på Spinnhuset at 16:17

Wow - you *did* have a busy day! :) I used Google translate which more or less did - although the glassworks became 'furnace' - but I knew what it meant. :)

The gallery opening wasn't until one o'clock, so I had all morning to weave! (But I admit to fringeing (sp?) until late)
And the theatre was quite "worth it", so "a good time was had by all"!

- btw, the glass pumpkin is a new design, just a week into production.