One neat trick – and a fly-shuttle mechanism

Starting with the "neat trick": over on Weavolution, Sally posted a trick to keep some order when weaving with several shuttles. Here it is – scroll down to the last picture.
As my warps often are wide enough to take several "idle" shuttles (and as I seldom bother about catching idle wefts... lazy, what more can I say?) , I seldom see idle shuttles as a problem.
But now – now I have the tail end of the honeycomb samples still on the loom (did I say lazy?) – and: the main reason for it still being there is that it is too narrow to handle the idle shuttles... So I adapted Sally’s idea (why didn’t I think of that, myself???) – here it is, not elegant, but functional: 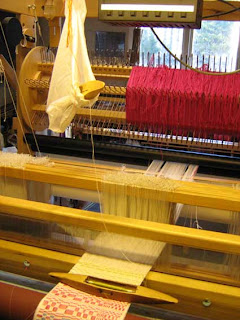 (No, I don't use the fly-shuttle(s) for narrow warps; it doesn't work very well and is far more trouble than it is worth.)

(Then, on WeaveTech, we got this link to a short video, showing a very elegant and simple solution. Enjoy!)

There is also a discussion going on Weavolution on flying shuttles and mechanisms for "flying" them. I tried to photograph mine, but there isn’t enough space behind the loom to get it all in one picture. (And, yes, there is way too much in the background to make a "good picture" - .)
Mine is a side-pull, which means you flick the handle to the right to propel the shuttle to the right, and vice versa. (With the center-pull mechanism, pictured on the Weavo thread above, you flick the handle downwards to propel both pickers at the same time.)
So: here is the left-hand side of the loom: 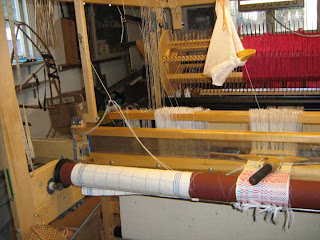 The right side (couldn’t get high enough contrast, so the cords are sort-of-highlighted) 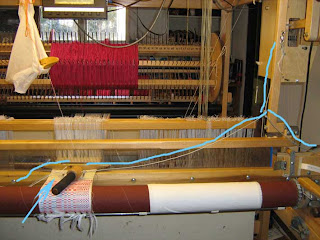 A detail from the right-hand side: 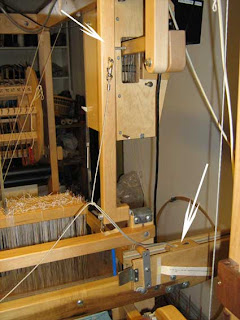 My loom* has an overhead beater – the top arrow points at the beater sword(?) – the bottom arrow points to the picker. There is no stop at the outside end of the box – the cord is short enough to stop the picker from falling out.

When I mount the double-box next time, I will take pictures of that, too.

* My loom is an AVL PDL - an older cousin to this one.
Posted by Kerstin på Spinnhuset at 17:02