There was a question over at Weavolution about
adding plain weave borders to a waffle weave.

As the asker had 4 empty shafts on her loom, I started doodling about other possible borders.

To take it form the beginning – here is one possible 4-shaft waffle draft: 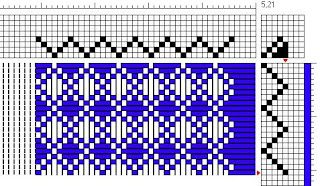 It uses five treadles, according to most(?) books/practices – which, had the loom been a "standard Swedish", would leave three treadles unused.

Adding 8 ends at each edge, we can easily get plain weave: 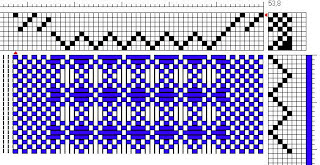 This only works because waffle with five treadles is treadled to a point - with straight treadling we would get two picks in the same shed every time we go from treadle 5 to treadle 1: 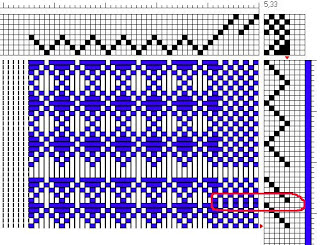 But... the reason I added the ends to all four empty shafts is that plain weave is not the best companion to waffle weave , because of the difference in draw-in/shrinkage.
So what about adding a twill border instead? 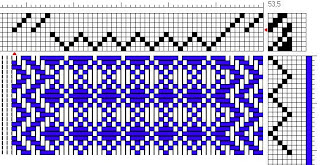 As usual, when treadling to a point, the outermost ends will not get caught when treadling in one direction, but the edge floats will not be very long , so in my opinion this will work in most instances.

This requires four more treadles, which would be a problem for the "standard Swdish" loom. As I understand it, US looms always (?) have two extra treadles. 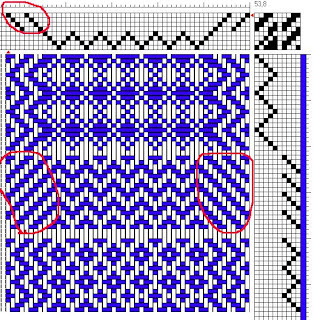 Note that I changed threading direction at the left edge, to make the twill line match (actually "oppose") the line at the right corner.

As usual, all pictures get bigger when clicked.
Posted by Kerstin på Spinnhuset at 11:16

Have you tried Laura's basket weave solution for borders on twills?