I had been thinking of "upgrading" this old idea - making it in wool-only. Would the pattern be visible, if doing it with the same open structure as the simple lattices?

Well, if I was in for a disappointment, I might as well try another idea: a three-layer all-wool version. 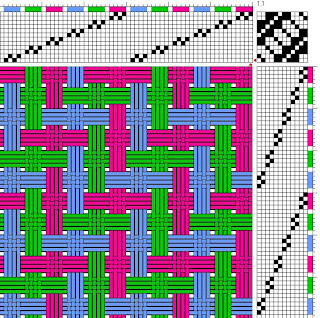 I decided to make the grids the same size as for the two-layer versions - would it be possible to tease the layers apart after the machine-finishing? Or would the whole thing come out hopelessly felted?

After pre-sleying it looked open enough: 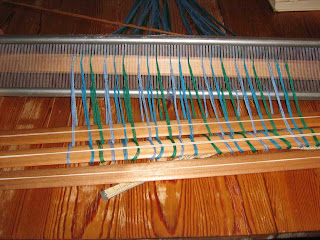 Of course, it was a bit less open on loom: 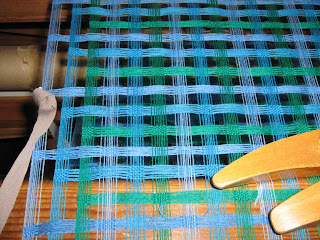 Both experiments fringed and ready for their bath - each in it's own mesh bag: 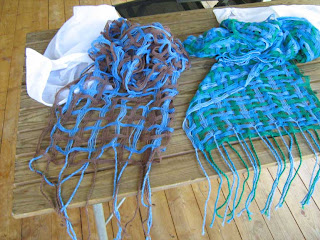 After washing, they both looked, well, tangled... 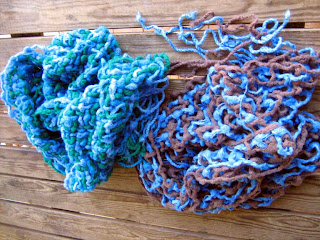 The brown-and-blue looked exactly as uninteresting washed as it did before. One disappointment done with. (Maybe I will look closer some other time, but for now it is placed in the "failure" bucket.)

The three-layer one was surprisingly un-felted - that is, it was quite easy to tease the layers apart. I liked the look, but we all know that pressing is part of the wet finishing, right?
I decided to experiment further, so I pressed one end as hard/flat as possible. The other end got treated in the mangle - but not very much. (As I wanted to leave the middle untreated, I had to wind it on and off the mangle many many times - it got maybe 6-7 short passes.) 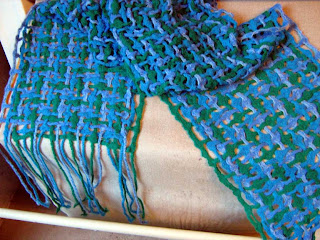 The mangled end to the left, the pressed to the right: 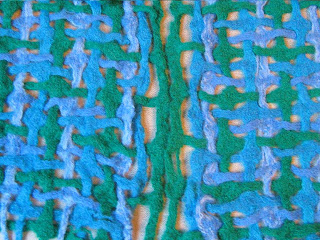 Completely dried, arranged on a mannequin: 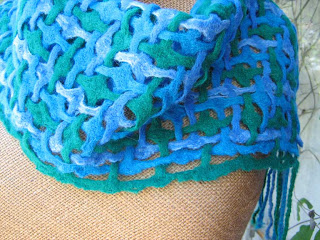 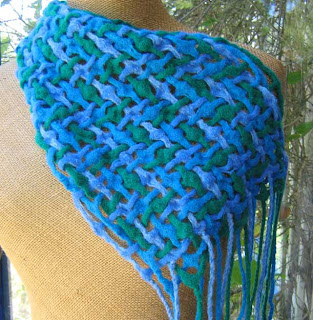 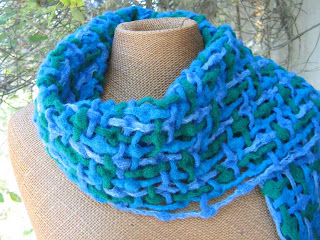 I have showed the result to several persons, both weavers and non-weavers. So far, ALL have preferred the mangled end. Myself, I think that perhaps "nothing" is good enough, maybe it could be treated with a short time in the dryer.
And maybe I could try with a slightly more open "mesh" - like 2 cm empties instead?
Posted by Kerstin på Spinnhuset at 12:40

Interesting that people would prefer the feel of the mangled end. You would think the pressing and mangling would achieve the same feel. Live and learn! ;)
cheers,
Laura

The big difference may be the heat? Or, perhaps the mangling was not "enough" - I would certainly have mangled it longer if it wasn't for the experiment.
As it is, the pressed feels, well, pressed, the untreated is a bit, hm, not quite "hard", but there is always a difference in hand for a "just dried" and for a "dried and manipulated" piece of cloth. (Which is why I am thinking a sjort trip in the drier)
- and today yet another non-weaver preferred the mangled end!

I'm so impressed by how straight it looks on the loom! I get quite stressed by open weaves and multiple shuttles... When I tried 3 layers of DDW there was a lot of crashing-to-the-floor involved.

Well, I guess I choose the right moment to take the picture ;-)

- actually, there was a lot of fiddling at the right-hand side before I remembered how to let the shuttle(s) exit for the last pick(s). Next time I might do it on the dobby - I *think* 16 shafts would be enough to handle the right-hand edge...