The bad-idea and it's sample


Never mind what the end idea is - I wanted something completely reversible, and it had to have a supplementary weft.
This sounds like overshot (daldräll), so I started with the traditional cat's paw pattern. After adding another "block" and a "turned" tieup, I had this: 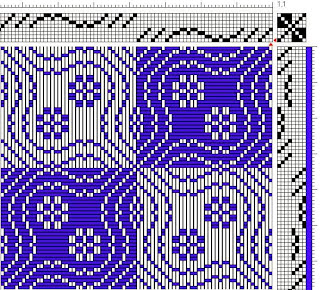 Could perhaps be interesting?

Then I made one (of probably several) bad decisions: what if I put it into the fan reed?
Now, the fan reed has 26 dents per fan, so I had to reduce the repeat to 26 profile ends (each representing 2 warp ends). Then I had this: 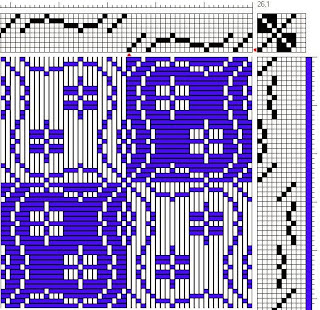 Still recognizable... perhaps. The treadling can be reduced in various ways, and is perhaps better left until the actual weaving. But wait: I have to have an idea of when/how often to change the reed position... some possible variations: 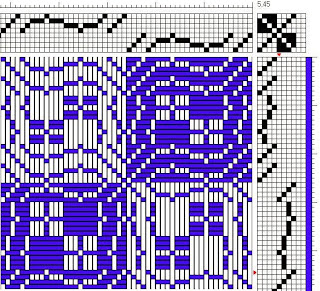 Now, no doubt you all wonder why I didn't abandon the idea right here? Looking back, I wonder, too. (But is was only some 180 ends, and perhaps it would be interesting, and...)

The end product is (was, for this try, anyway) to be relatively low-contrast, but for the sample I used what was nearest at hand: a narrow white cotton warp and a blue-green already-wound quill, also cotton. (Maybe, but only maybe, it would have looked better with lower contrast...) 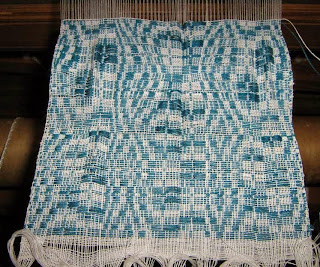 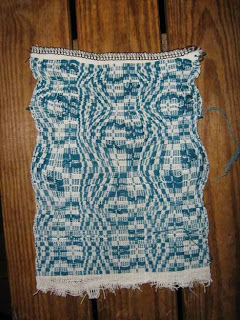 (washed and flattened, but not properly pressed/mangled)

I'm sure you all agree that this sample has no future...
(Next try will, perhaps, be a biggish waffle weave. If I can figure out a way to use a discontinuous weft.)

Bonus: with a bigger scale (which of course makes it a dräll rather than an overshot - thus min 24 shafts, preferably 32 or 40), and a natural linen on a white warp, I still think the pattern is "good enough": 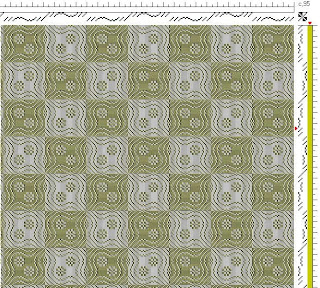 Posted by Kerstin på Spinnhuset at 13:14

Fun, I hadn't thought of turning the design into two 'blocks'. I think it looks great, but perhaps beyond my reach? If it needs 24 shafts...

Yes, I too remember when 16 shafts was (were?) "the ultimate" - after that, one went to drawlooms or jacquard, I remember reading somewhere... It seems that nowadays all "serious" weavers have a minimum of 32.

(Reminds me of several "because I could" tries, both mine and others')

Hmmph! And I have been thinking of fan reeds and lace weave, along the lines of 'I wonder what would happen - - - -'. The trouble is that drafts do not tell you.
Pat Foster
Malvern