I got a question: about strategies to fix long floats, á propos my twill play (which also appeared as weave-of-the-month for June, 2010). (links open in new windows)

First: how long is a “long float”? I’d say it depends on several things – the yarn used (wool will adhere to itself, “felt”, if you will, during wet finishing/pressing; most cellulose yarns will not), the grist of the yarn used (the same float length in numbers will be a lot longer in measured length for a thick yarn than for a thin), the end use of the cloth (a long-ish float in a towel in constant use will probably catch more than the same float lenght in a, say, scarf, or in a tablecloth).

Looking at the 16-shaft "idea-draft" it has max floats of 5. For my green blankets, I (probably) used a sett of 6 ends per cm, which makes the 5-end float shorter than 1 cm. Then wet finished, even if not "felted", these floats get a) shorter by "just" shrinkage and b) somewhat felted, thus less "outstanding". They will probably not survive the cats – but then, nearly nothing survives an enthusiastic cat...
Using the draft for, say, napkins, I would probably choose a cotton 16/2 sett at ... say 20 ends per cm, which would make the floats 2.5 mm (or 1/10" – this one was easy even for us metrics). And I think that actual float length requires a very enthusiastic cat to get destroyed fast...

However, this doesn’t answer the generic question about strategies.
As "extra" floats occur at the points where the threading/treadling reverses, the only way to eliminate them is to eliminate the reversals.
Here we have three different threadings (marked by different warp/weft colours), treadled "as drawn in". The "true" squares are outlined in a garish green, just to make them easier to see (click to biggify). 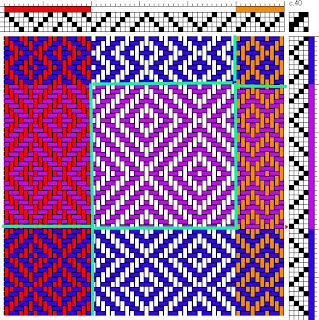 The first two (short points and longer points – the longer I would call goose eye), with a 2/2 tieup will never give longer floats than 3. Usually this is not a problem – but if you wish to avoid that, the only 4-shaft remedy (I think) is to thread like at the far left: at the reversing point, skip one shaft and go from shaft 4 to 2; from shaft 1 to 3. (This also means there is no way of obtaining true tabby, because you are no longer following the "odd-even" rule.) Treadling in the same way, you get what I call diamond twill, which could also be called broken-reversed twill. (I think I have seen it called "crystal twill" in English, but I may be wrong.)

These breaks-reversals can be extended without problems, to get bigger diamonds – they can be treadled straight to give what I call herringbone. These threadings/treadlings never give floats longer than over 2 ends/picks.(again click to biggify) 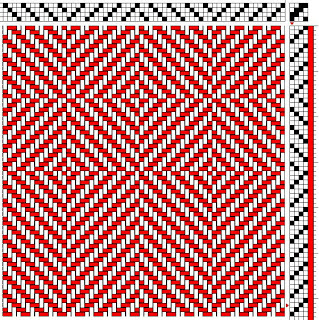 Posted by Kerstin på Spinnhuset at 20:49

And the biggest benefit (imho) is that when you reverse directions the outside ends do *not* fall out of the cloth...love herringbone! ;)