The double layer scarf that caused the buttonhole elastic experiment would (preferrably) have to be warped with eight ends, as I did not want to bother with wding spools for such an odd colourway. As I have shown before, warping with four ends is no problem - but how to get eight ends separated by just fingers?

Answer: use a reed: 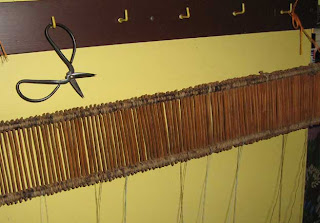 All ends cleanly separated, I then took them two at a time through my fingers, and wound each section on the warping mill, using an eight-end cross..
As I felt adventurous, I just grasped the cross flat between fingers, and dropped it into the tension-box raddle, and tensioned the bout "by feel". 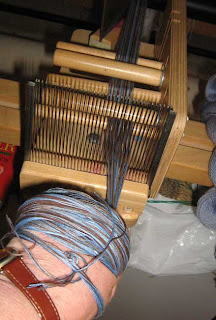 Some of the sections do look a little wonky, but I'm now nearing the end of the 12m warp without problems: I think I can pronounce the experiment successful.

The first scarf on it's way to the cloth beam: 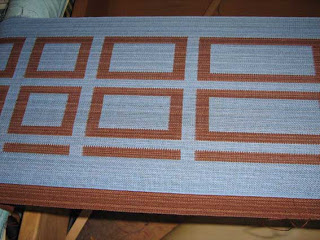 and the second at the sandpaper beam: 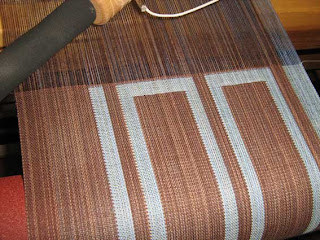 Posted by Kerstin på Spinnhuset at 10:40

Sometimes we just have to have faith and go ahead and try. :) Looks good!
cheers,
Laura

Why not use a paddle for more than 4 threads? I have also used a paddle for really fine threads as I don't like thread cuts (like paper cuts) too well. ;)