What time can do

Other than gallivanting around, I have done some weaving, too!

I planned this double-layer scarf, and decided it would do well on the AVL. As it is so much more work to weave with the double-box, I usually change to the single-box when I don't need two shuttles.
The double-box attachment had been sitting in a dark corner for several months, but now I took it out and mounted it. And found... the rubber picker-returns were completely unusable, both of them. Only time had eaten them - they were relatively new when I last used them. And I had only one spare spring.
Obviously, it was time to do some radical thinking (and also find a fast fix). While still thinking about possible "final solutions", here is my fast fix: 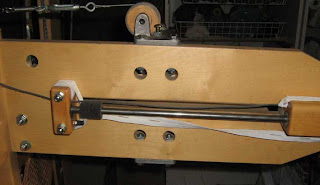 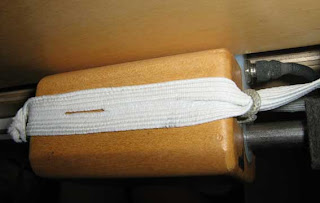 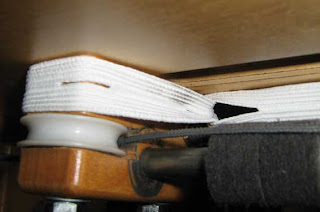 Yes, buttonhole elastic and a pin.
It works quite well, especially when I had devised a "deflector shield" to ensure that the shuttle could not be trapped under the picker. 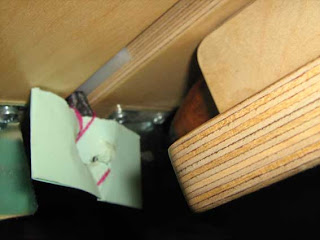 But I am still pondering a final solution... or at least a solution with springs that will only deteriorate with actual usage. I'll keep you posted.

Posted by Kerstin på Spinnhuset at 18:34